A Legends of the Realm Story

series: Legends of the Realm 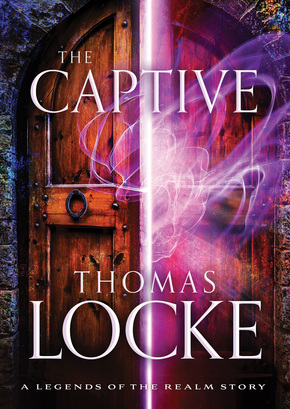 The only remnant of Joelle's former life is her name.
The only hint of her future is a foreboding vision of darkness.
And her only hope is a man she has yet to meet.

One of the last of a disappearing race, Joelle spends her days as a prisoner of the Long Hall, sweeping corridors and dusting scrolls while young wizards learn to ply their trade. In the dark of night, she practices the magical arts that are forbidden to one of her kind, hoping to soon break the spell that holds her captive.

But an evil is growing beyond the enchanted stone walls. Joelle will need much more than her own skills to escape it. Someone is coming for her. And when he arrives, he will change everything.

This short ebook excerpted from Emissary gives you a magical glimpse into the Realm--and the heroes who will stop at nothing to save it.


Thomas Locke is a pseudonym for Davis Bunn, the award-winning novelist with total worldwide sales of seven million copies. His work has been published in twenty languages, and critical acclaim includes four Christy Awards for excellence in fiction. He divides his time between Oxford and Florida and holds a lifelong passion for speculative stories. Davis's screenplay adaptation of Emissary is currently under development as a feature film with a British production company. Learn more at www.tlocke.com.

"A wonderful journey away from the real world . . . A fine start to this intriguing series."--RT Book Reviews, 4 stars

"Readers of inspirational fantasy will enjoy [Bunn's] foray into a new genre."--Publishers Weekly

"A thrilling new journey in the realm of fantasy and science fiction. Filled with action, romance, and subtle humor, this is the beginning of a promising new series."--LifeIsStory.com, 5 stars

"Locke is a master wordsmith, weaving lyrical prose, fully fleshed characters, and a consuming plot into a tale that is beautiful and epic."--BuddyHollywood.com

"Moves like a contemporary thriller but harkens back to the enduring genre of classic fantasy."--FamilyFiction.com

"Trial Run is wonderfully told: a swift, engaging story that shows a large understanding of the human condition, our essential frailty, our drivenness, our need for connection. As three stories collide, Locke brings into play some key questions that face each of us as human beings: Do we know what is really going on? If we don't, can it destroy us? This is artful writing, full of suspense."--Jay Parini, New York Times bestselling author of The Last Station

"Readers will love this storyline . . . A true psychological thriller that cannot be put down . . . An awesome jaunt into a world that may be closer than we think."--Suspense Magazine

"High tech mixed with intelligence gathering, combined with a fast-paced story and evocative writing. Trial Run grabs readers from the first page. Locke weaves words to create masterfully evocative descriptions, scenes, and characters. The science is presented in a Crichton-esque manner, compelling readers to believe that not only can it be true for some future date, but it is probably being used in some secret laboratory right now. Trial Run will make a great last-of-summer read. Once you start, you won't want to put it down."--BuddyHollywood.com

"Thomas Locke masterfully keeps the suspense level taut throughout the book. It is a rare author who can create such dramatic tension in a storyline that contains areas of technical discussion, like quantum computing, while still maintaining a character-driven plot. A fast-paced, constantly unfolding mystery with well-developed characters, Trial Run promises to begin a strong new series that manages to transcend the bounds of science fiction writing."--The Manhattan Book Review