Cycle Two of the Harbingers Series 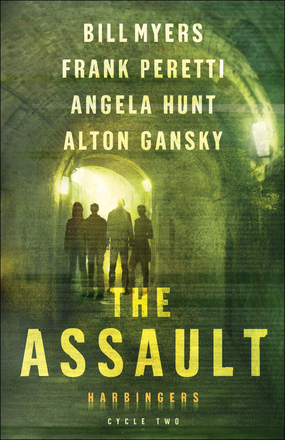 As Darkness Threatens, Four Gifted People Will Give the World Its Best--And Maybe Only--Chance to Survive. This is Harbingers.

In Invitation, four beloved and bestselling suspense authors introduced supernaturally gifted characters on a race to stem the tide of growing evil. Now Bill Myers, Frank Peretti, Angela Hunt, and Alton Gansky return with the next cycle of fast-paced and riveting tales.

In Bill Myers's "The Revealing" the team finds themselves in Rome trying to retrieve the mystical spear Hitler once stole. The task will take them from hidden chambers inside the Vatican to a mysterious seaside cave with unexpected and dangerous powers.

Frank Peretti's "Infestation" tells of a microscopic plague unleashed on the world that deceives, blinds, kills, then spreads and kills again. The Harbingers team must confront this faceless evil bent on seducing and destroying humankind.

In "Infiltration" by Angela Hunt, a seaside respite intended to buy time for the wounded team turns deadly when misplaced trust leads the Harbingers into dangerous waters.

Alton Gansky's "The Fog" reveals a supernatural mist unlike any other, filled with vicious monsters that kill whatever they find. When one team member realizes the only way to stop the fog is to enter it, the ultimate sacrifice must be made.

"The four novellas allow readers to get a fuller picture of each character, bringing a deeper dimension to each of them. The four novellas build off each other, yet are uniquely different, tied together through the characters and those out to get them. The Assault is an easy-to-read page-turner, allowing readers to get through the book quickly while remaining excited and engaged."