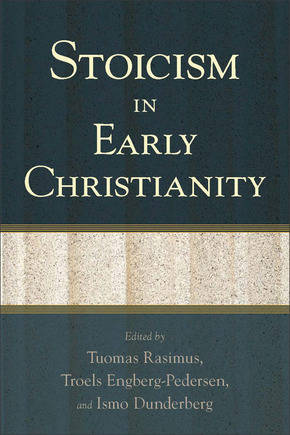 "Given the distinguished list of contributors, their breadth of expertise, and the high quality of the articles, there is no doubt that this collection will contribute significantly to the study of the interaction between early Christianity and Stoicism. This volume is likely to prove foundational by establishing new areas of inquiry and topics of research."--Jeffrey R. Asher, Catholic Biblical Quarterly

How usefully do distinctly Stoic ideas illuminate the meaning of first- and second-century Christian texts? This book suggests that early Christians--the authors of New Testament and noncanonical writings, including some early apologies--were often more influenced by Stoicism than by Middle Platonism. This insight sheds an entirely new light on the relationship between philosophy and religion at the birth of Christianity. The book will appeal to scholars, graduate students, and libraries interested in New Testament studies and the early church.
Contents

"This important collection of essays will be of interest to all those concerned with seeing the early Christian movement within the broader context of the Greco-Roman world. The focus on Stoicism here opens valuable new insights into aspects of early Christianity and will be a major stimulus for future research."--Christopher Tuckett, Pembroke College, Oxford

"This volume, a virtual compendium of important Stoic teaching, clearly illumines--through close and careful textual study--the original significance of many passages in early Christian texts that deal with personal and communal conduct, the nature of Christian freedom, mastery of the emotions, the importance of embodied life and moral progress, the relation between human freedom and divine providence, and the tension between the divine immanence and transcendence of the created order. Individually and collectively, this set of essays brings to our awareness the distinctive contribution to Christian thought of an often overlooked school of ancient thought."--John D. Turner, University of Nebraska

"This is a book for which we have been longing for many decades! The relationship between Platonism and Christianity has dominated academic debates while the influence of Stoicism has been largely neglected. This volume deftly treats all relevant areas in which Stoic influences may shape early Christian theology and in so doing transcends the Judaism/Hellenism divide."--Samuel Vollenwieder, Universität Zürich

"This collection of essays by diverse scholars makes the case that Stoic philosophy had a more significant impact on the New Testament--including Paul and the evangelists--than much of more recent scholarship has conceded. Many New Testament scholars look to Neoplatonism as the dominant Greco-Roman influence on the biblical authors, but the essays in this volume cumulatively make the case that during the period contemporary with Paul and other New Testament authors Stoicism was still an influential philosophical perspective in the Greco-Roman world, particularly in regard to ethical thinking."--Donald Senior, CP, The Bible Today

"Stoicism in Early Christianity is the most recent and complete survey of scholarship on a topic that has been long neglected. The essays are exceptionally rigorous, far-ranging, and represent a high standard of scholarship, making this collection an essential resource for anyone interested in this area of research. For readers with a limited understand of Stoicism, the book provides an excellent introduction to some of the philosophy's most important concepts. Stoicism in Early Christianity greatly enriches the appreciation of Christianity as part of the cultural fabric of the Greco-Roman world, and it offers a fresh perspective on the relationship between this popular philosophy and Christianity in its earliest years."--Kelly Gerald, Bryn Mawr Classical Review

"The academy has a long history of examining the Platonic contributions to the Christian movement, but the Stoics have been relatively neglected. The editors of and contributors to this volume endeavor to remedy this situation, and the results amply demonstrate the success of their efforts. . . . Given the distinguished list of contributors, their breadth of expertise, and the high quality of the articles, there is no doubt that this collection will contribute significantly to the study of the interaction between early Christianity and Stoicism. This volume is likely to prove foundational by establishing new areas of inquiry and topics of research. Moreover, the bibliographies of the individual chapters are especially helpful in the way that they allow readers to explore the existing literature pertaining to the specific topic or text under investigation."--Jeffrey R. Asher, Catholic Biblical Quarterly

"Each essay in Stoicism in Early Christianity contains a bibliography, and the volume as a whole has separate indexes for authors, subjects, and ancient sources. Its critical apparatus alone is reason enough to recommend the book for scholars in early Christian literature seeking an accessible overview of recent research comparing Stoic and Christian texts. All current respectable scholarship in early Christianity is now post-Harnackian in rejecting impermeable boundaries between Jewish and Hellenistic worlds, leaving interpreters to sort out the relative importance of Jewish, Platonic, and Stoic influences on early churches. Whatever relative weight interpreters accord to these streams of influence in Christian history, this book provides a helpful window into the current state of research on one of those influences."--Christopher Denny, Catholic Books Review

"Stoicism in Early Christianity manages to present the reader with a thorough overall survey of possible Stoic influences on an admirably wide variety of early Christian (and pseudo-Christian) texts. . . . The book is an invaluable resource on the topic of the interaction of Greco-Roman popular philosophy with early Christian texts. Both students of biblical and early Christian studies requiring a general picture of the recent discussion around the influence of Stoicism and scholars interested in the detail of the arguments and the supporting bibliographical references will find the book useful."--Samuli Siikavirta, Reviews of Biblical and Early Christian Studies

"This edited volume consists of scholars from around the world; so this is not an isolated contribution to the field. . . . Articles masterfully articulate the possible influence of Stoic ideas upon the authors of their respective Christian/Gnostic texts. . . . The most beneficial aspect of the volume . . . [is] to provide another lens or way of looking at familiar topics and, if we are not too entrenched in our own understandings, we just might see things that we have missed before. . . . This volume, on the whole, is an especially good introduction to the topic and covers a wide range of early Christian texts, and each chapter is followed up by an up-to-date bibliography for further research."--Stewart Penwell, Stone-Campbell Journal

"[A] high quality collection of essays exploring the influence of the Stoics on early Christianity (and Gnosticism). . . . [The essays] make many compelling arguments. . . . While many might see this book as an interesting historical study but nothing more, many of the insights are deeply practical and significantly contribute a better grasp of the intellectual context of the NT. . . . Much of the scholarship is top-notch and often touches on key issues both of biblical interpretation and pastoral care (e.g., healthy management of emotions) that ought not to be neglected in the work of biblical scholars or the training of future ministers."--Dylan Pahman, Calvin Theological Journal