series: Baker Commentary on the Old Testament Wisdom and Psalms 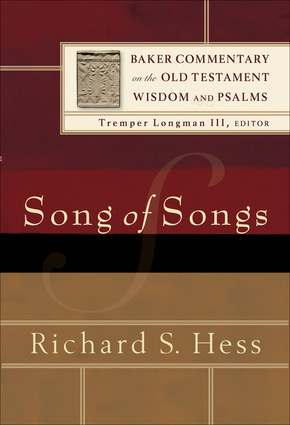 Song of Songs is the first of six volumes in the Baker Commentary on the Old Testament Wisdom and Psalms series. This series is tailored to the distinctives of poetry and wisdom literature. Features include:

"Finally, here is an up-to-date commentary on the Song of Songs that is easy to use. With superb clarity and concision, Hess's commentary makes a world of scholarship about the Song of Songs available to a broad audience. Readers will enjoy Hess's close attention to the lyrical beauty of the Song of Songs and his discussions of the book's theological insights."--Mark S. Smith, Skirball Professor of Bible and Ancient Near Eastern Studies, New York University

"Not much of the Song of Songs shows up in church liturgy. It seems x-rated and so user unfriendly that we want to keep it in a plain brown wrapper, but Richard Hess is not afraid of this song. He has put it squarely in the center of the Bible, where it has always been, and said 'Fear not! There is music in this piece. Tear away the brown wrapping. Then sit quiet and the ancient music will begin.' Thank you, Richard. We can hear it--exotic and mystical, romantic and intimate, scriptural and sexual--a song for the ages."--Calvin Miller, Beeson Divinity School

"I read this book from cover to cover, both enjoying and learning from it. This is not just another commentary on the Song of Songs. While it interacts with other commentaries, it makes a unique contribution by reason of the technical skills and theological perspective of the author. A master of comparative Semitics, Hess is also well versed in historical and literary criticism as well as in the geography and archaeology of ancient Israel--all of which are evident in the commentary but never overwhelm it. Instead of having recourse to symbolic interpretation, he treats with great sensitivity the sexually explicit nature of this sensuous love poem that ultimately affirms the Bible's teaching that God is love. Finally, Hess skillfully demonstrates how Song of Songs has an important role to play in the canon of Scripture. Hess's excellent book is intended for both professional scholars and lay adults."--Philip J. King, professor emeritus, Boston College

"This well-researched commentary ably expounds the text as an expression of committed human love, while remaining alert to the theological implications of this focus."--Leslie C. Allen, senior professor of Old Testament, Fuller Theological Seminary

"To comment on the book described by Jewish rabbis as 'the holy of holies' is risky: it is too easy to reduce its sublime poetry to banal prose. But Hess's daring has paid off. Here is a commentary on the Song of Songs that is sensitive, wise, and beautiful. Hess's thorough scholarship is worn lightly and is used to illuminate the text helpfully. Students, pastors, and scholars will find this commentary a rich resource."--Gordon Wenham, tutor in Old Testament, Trinity College, Bristol

"Hess helps readers to enjoy the beauty of the Song of Songs as love poetry and enables them to move from this celebration of physical human love to a deeper understanding and greater enjoyment of God's love for all humanity. Hess does this with careful attention to the text and full awareness of the Song's ancient Near Eastern background. His exegetical decisions judiciously take into account traditional interpretations and recent scholarship. The analysis of the Song's rich poetic imagery of physical human love is imaginative and informed."--Knut Heim, professor of Old Testament, Denver Seminary

"Hess combines his widely recognized expertise in language and backgrounds with the perceptive literary eye of an exegete to produce a masterful commentary. He provides a canonically sensitive interpretation of this oft-misunderstood wisdom book."--John H. Walton, professor of Old Testament, Wheaton College and Graduate School

"Geared toward clergy and seminary students, this new series is also accessible to nonscholars."--Interpretation

"Hess is an accomplished and helpful Old Testament scholar and he has done a masterful job in this volume. This commentary is extremely well-written and useful. It weaves together both rich exegetical and homiletical insights. This commentary is particularly well suited for the preacher who has to step into the pulpit each week. However, this is not to say that this commentary lacks scholarly depth. Hess provides a tremendously deep well of scholarly information. . . . I give this commentary my highest recommendation. It is a must have for anyone who attempts to plumb the depths of the Song of Songs."--Anthony T. Selvaggio, Semper Reformanda

"Limiting the scope of the [Baker Commentary on the Old Testament Wisdom and Psalms] series to the Psalms and Wisdom books allows each volume to be 'tailored' to the unique character of that portion of the Hebrew Scriptures and to highlight significant poetic conventions, a task which Hess accomplishes richly and thoroughly. . . . In the 'Translation' sections, Hess leaves no word unturned: his detailed notes offer historical and etiological facts for virtually every significant word in each section, thought-provoking arguments for nontraditional lexical decisions, and alternative points of view. . . . Nonscholars should at least skim the extensive footnotes, which provide a wealth of fascinating information, much of it comparatively 'user-friendly,' and the substantial bibliography. This book speaks to different levels of scholarship without forcing one level on the reader, raises thought-provoking questions without imposing answers, presents a theological challenge without threatening faith. One need not agree with everything Hess says to conclude that he solidly achieves the series' goal to 'inform readers and . . . stimulate reflection on and passion for' a sacred writing that has intrigued, shocked, and challenged readers for centuries."--Susan A. Blake, Ashland Theological Journal

"The literary and grammatical-syntactic studies are very thorough. Hebrew words appear in transliteration. Hess has combed through other commentaries and literature for their best insights. Pastors and other scholars working through the Hebrew text will find much help and insight here."--John F. Brug, Wisconsin Lutheran Quarterly

"I find [Hess's] author and reference indexes highly useful. . . . 2005 has been a good year for Song of Songs research. [A] major commentar[y] . . . [has] been published. [It pays its] respects to Marvin Pope's monumental commentary and take[s] Song of Songs scholarship further. . . . A celebration is in order."--Athalya Brenner, Review of Biblical Literature

"An accomplished, celebrative volume. . . . The author describes his method of interpretation as a culmination and combination of observed poetic form, themes, imagery, and distinct vocabulary. Accordingly, he provides helpful and extensive analysis of a passage's poetic structure. . . . He exudes also an admirable commitment to lexical detail, which is both informative and refreshing. . . . Hess' enthusiastic presentation and obvious labours furnish an undeniable contribution."--Jennifer Pfenniger, Journal of Hebrew Scriptures

"The commentaries in this series . . . are written primarily for clergy and seminary students. However, they will benefit any serious student of the Scriptures. This work by Hess . . . is an insightful commentary on one of the most hermeneutically difficult books of the Bible. . . . Hess has provided helpfully nuanced comments on every verse in the book, including many word studies. . . . This is a masterful work, one of the best evangelical, exegetical commentaries on this difficult book of the Bible."--Abe Johnson with Thomas L. Constable, Bibliotheca Sacra

"[Hess] provides a translation of the text under consideration and extensive critical explanation of that translation. The commentary itself moves through the text line by line, attending to the intricacies of the Hebrew language and the power of the erotic imagery. Throughout the commentary he weaves in intertextual references, thus relating the content of these poems with other biblical material. It is in the footnotes that Hess engages the insights from other commentators. Though the analysis here has been done with both care and skill, the text is quite readable. This book will be a helpful resource for students and teachers alike."--Dianne Bergant, CSA, Bible Today

"Although Hess aims his volume . . . at scholars and those in ministry, he in fact makes this ancient love poem accessible to any reader of the Bible. . . . By dividing his translation according to speaker (male, female, chorus, and so forth) Hess helps a reader who, with the traditional Bible in hand, cannot readily hear the shifting voices. Another user-friendly feature is that the verse under discussion is repeated just before Hess comments on it. . . . The textual notes that accompany the translation secure the reader's confidence that Hess's decisions are well informed. . . . Hess's translation captures the passion of this love poem. . . . Complementing his exquisite translation is the spirited language of the commentary. . . . This book is a pleasure to read."--Craig E. Morrison, Catholic Biblical Quarterly

"Hess has written a remarkably fair, thorough, and interesting commentary. He has a very good grasp of the literature and a fine grasp of semantic detail and is insightful about poetic patterns, cultural background, and the interplay of metaphor and imagination. . . . Hess's judiciousness is manifest in his introduction, which carefully presents the evidence for date, traces the history of interpretation, discusses the question of unity, and alludes to various modern and postmodern approaches. . . . Hess is good at tracing wordplays and interconnected motifs throughout the Song. . . . Hess has produced a very good, solid commentary, one of the best of recent years. It lacks sentimentality, is highly informative, and is sensitive to detail. . . . [The commentary] is always lively, full of insight, and challenging."--Francis Landy, Shofar

"The Baker Commentary on the Old Testament Wisdom and Psalms offers a series of substantial volumes on these OT books. . . . Useful tools for study and teaching."--PreachingNow

"The primary audience of this series is clergy and seminary students; technical material is restricted to footnotes, so that the main text of the commentary is accessible to any adult reader, while the scholar can benefit from the 'fine print.' Richard Hess . . . succeeds remarkably well in balancing the needs of such a diverse target audience. Hess's highly regarded philological expertise is evident in the copious technical notes accompanying his translation, as well as in his clear discussion of many important lexical and grammatical issues in the main commentary. Readers will appreciate his aptitude for explaining features of Hebrew poetics and literary art in 'plain English.' Contemporary application abounds throughout his interpretation and in the sections designated 'Theological Implications.'. . . I can only affirm my appreciation for this balanced, practical, and sensitive contribution to scholarship and the Church. Hess's commentary will be my 'first stop' when seeking either detailed exegetical discussion or homiletical help for study and application of the 'Best of Songs.'"--John W. Hilber, Bulletin for Biblical Research

"Compared with other good commentaries [on the Song of Songs], this one is generally lengthier, more up-to-date, and more detailed and scholarly. . . . The current commentary should be considered among the best on the text."--William D. Barrick, Master's Seminary Journal

"An insightful commentary and translation of an often-misunderstood book of the Bible. . . . [Hess] provides helpful comments on every verse of the book, including many word studies. . . . Hess has succeeded in highlighting the message of the book, namely the gift of God's love both in the physical relationship between a man and a woman within holy matrimony and in the spiritual relationship as it points to the greater love of God for his people and their response to him."--Daniel W. Decker, Bible Editions & Versions