Solomon among the Postmoderns 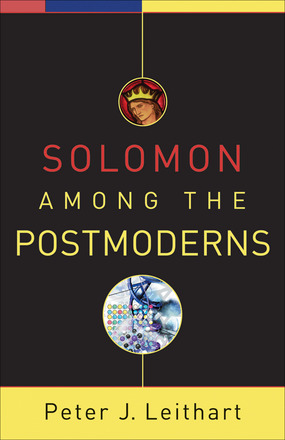 "Classic Leithart: learned, witty, and readable, Solomon among the Postmoderns guides us toward a sympathetic and faithful engagement with our critical, protean, and vaporous times."--R. R. Reno,

Solomon's words from a famous passage of Ecclesiastes have been translated, "Vanity of vanities, all is vanity." But in Solomon among the Postmoderns, author Peter Leithart says those words are better translated as "Vapor of vapors, all is vapor," emphasizing that human life is fleeting. Leithart uses this theme, as well as the entire book of Ecclesiastes, to indicate how Solomon resonated with postmodernism.

Exploring the strengths and limits of postmodernism, he displays how the theory reflects an important biblical theme: the elusiveness and instability of the world. But he goes on to show that biblical faith takes us beyond cynicism and despair, exploring Solomon's frequent call to "eat, drink, and rejoice."

A skilled theologian and widely published author, Leithart writes for audiences including professors and students of philosophy, apologetics, biblical studies, and theology, as well as laypeople seeking a biblical view of postmodernism. Those familiar and unfamiliar with postmodernism will learn from the book's forthright exegetical approach, which is unique among the many books about postmodernism available today.

"Peter Leithart's Solomon among the Postmoderns is welcome evidence of a maturing evaluation of postmodernism in Christian circles that neither lionizes nor demonizes. Engaging in conversation rather than caricature, the author takes his interlocutors seriously precisely because he is so confident in the power of the biblical narrative to pull down all of our towers of Babel, whatever we call them. For those weary of wholesale denunciations or wholesale endorsements of postmodernism, this patient, well-informed and well-written essay in godly wisdom will illumine and inspire."--Michael Horton, Westminster Seminary

"Classic Leithart: learned, witty, and readable, Solomon among the Postmoderns guides us toward a sympathetic and faithful engagement with our critical, protean, and vaporous times."--R. R. Reno, Creighton University

"Here is a vivacious account of postmodern culture from a true Renaissance man. With characteristic verve, Leithart deftly narrates the postmodern critique of modernity--without the typical fixation on epistemology and questions of knowledge. But the story doesn't end on the postmodern bandwagon; rather, Leithart pushes further to show that the postmodern critique of idolatry still fails to yield wisdom. In the wake of Derrida and Foucault, we still find ourselves waiting not for Godot or St. Benedict, but Solomon. Amidst the ruins of modernity, this book is an invitation to feast in the temple."--James K.A. Smith, associate professor of philosophy, Calvin College and author of Who's Afraid of Postmodernism? Taking Derrida, Lyotard and Foucault to Church

"Pascal wrote that there are two basic intellectual errors: 'to exclude reason, to admit nothing but reason.' In Solomon among the Postmoderns, a pleasant stroll through contemporary philosophy, literary theory, and cultural studies, Peter J. Leithart tries to guide his readers away from both mistakes. . . . Solomon among the Postmoderns is a fun read, and, even if he hits the curbs now and then, Leithart is going in the right direction."--First Things

"Peter Leithart is both a pastor . . . and a professor of theology and literature. . . . The combination is more than adequate for helping the reader come to grips with the omnipresent and often confusing thing known as postmodernity. . . . Throughout the book, Leithart works at persuading us that Ecclesiastes, proclaiming that all life is a vapor, would understand the postmodern dilemma. He succeeds rather well."--Jeff McAlister, First Things

"This is an engaging, and largely sympathetic account of postmodernism, intended for a Christian readership. . . . As an account of postmodernism, it is lucid and accessible; the style is easy and often witty. . . . [It] forge[s] some interesting links between the concerns of Qoheleth and modern philosophy, which make it a thought-provoking read."--S. D. Weeks, Journal for the Study of the Old Testament

"This work is informative as it traces major philosophical movements and voices past and present. Leithart's vast knowledge serves as a great guide for those less prone to philosophic tendencies. This book's style is compatible for a lay reader who is looking to understand where Postmodernity came from, what it looks like, and where it leads. . . . It is also formal enough in the implications of its ideas for seminary study though containing a less formal style. It might be a refreshing voice among many formal texts seminarians are required to read. . . . For those well acquainted with the discussion Leithart addresses, it will be a refreshing outlook that represents itself as a balanced view. It strives toward a biblical understanding in the midst of an ongoing conversation that is taking place in churches, classrooms, art galleries, and publications. I recommend it for its style, tone, content, and overall approach."--Bryan K. Blakemore, Stone-Campbell Journal

"Leithart attempts to read our present cultural situation in light of the book of Ecclesiastes. In doing this, he engages the cultural history of the previous five centuries with tremendous insight. . . . This work is both brilliant and thought provoking. It gives valuable insights into Scripture and also into our contemporary cultural situation. For this reason it is highly recommended."--Jack Kilcrease, Logia