Simon Peter in Scripture and Memory

The New Testament Apostle in the Early Church 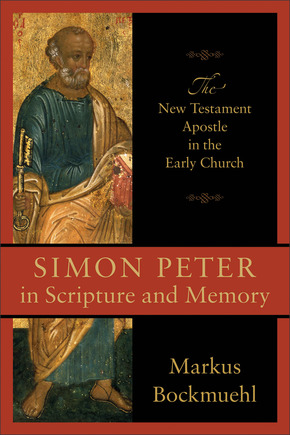 "All of Bockmuehl's much admired gifts are generously displayed in this volume. Those wishing to trace the footsteps of the 'underestimated apostle' in early Christianity will find no better guide than Bockmuehl and no better exposition of why that journey of remembrance matters."--C. Clifton Black, Princeton Theological Seminary
After Jesus, Peter is the most frequently mentioned individual both in the Gospels and in the New Testament as a whole, yet we know very little about this formative figure of the early church. Markus Bockmuehl introduces the New Testament Peter by asking how first- and second-century sources may be understood through the prism of "living memory" among the disciples of the apostolic generation and the students of those disciples. He argues that early Christian memory of Peter underscores his central role as a bridge-building figure holding together the diversity of first-century Christianity. Drawing on more than a decade of research, Bockmuehl applies cutting-edge scholarship to the question of the history and traditions of Simon Peter. New Testament students and professors will value Bockmuehl's fresh insight into the biblical witness and early Christian tradition.
Contents
Introduction
Part 1: Peter in Canon and Memory
1. Simon Peter . . . in Living Memory?
2. The New Testament Peter: An Overview
Part 2: Peter in the "Living Memory" of East and West
3. The Eastern Peter
4. The Western Peter
Part 3: History and Memory--Two Case Studies
5. How Peter Became a Disciple
6. From Unlikely Birthplace to a Global Mission
Concluding Observations
Indexes

"Probing intelligence, originality without eccentricity, flawless scholarship, felicitous style--all of Bockmuehl's much admired gifts are generously displayed in this volume. Those wishing to trace the footsteps of the 'underestimated apostle' in early Christianity will find no better guide than Bockmuehl and no better exposition of why that journey of remembrance matters."

"Bockmuehl has long distinguished himself as a careful historian, sensitive to both Jewish and Greco-Roman dimensions of the early Christian movement and an astute reader of literary texts. This well-written and ecumenically sensitive volume draws on all his impressive skills. New insights abound regarding the portrayal of Peter in the New Testament and in nonbiblical sources from the second century."

"Bockmuehl draws on his previous investigations of Peter to provide here a valuable study that combines amazing breadth of coverage of evidence (textual, artistic, and archaeological), sensitive and cogent analysis, and thoughtful concluding reflections for Protestant and Catholic Christians today. He takes readers on an intriguing tour of early Christian traditions about Peter with full knowledge of scholarly studies and also an appropriate exercise of his own judgment. The results are fascinating and 'must' reading for anyone seriously interested in early Christianity and its aftermath."

"It is a joy to welcome Markus Bockmuehl's latest study on Peter the apostle. Not since Cullmann in 1952 has there been such a thorough examination of the biblical information on Peter. This quest is pursued along with the Oxford tradition of patristic scholarship and with contemporary methodological sophistication, especially in regard to memory. Inscriptions and archaeology are also mined for their contributions. The whole work is inspired by a heart that beats for truth, for ecumenical understanding, and for reconciliation."

"Widely esteemed New Testament scholar Markus Bockmuehl here sums up his research into the 'historical Peter.' Bockmuehl has a keen sense for the strengths and limitations of historical-critical inquiry. This erudite and accessible book will be welcomed by all who seek to understand not only what historians can surmise about the Galilean peasant Peter but also what such research can contribute to reflection about an ongoing 'Petrine ministry' among Christians today."

"Bockmuehl is clearly learned in all the standard historical questions surrounding the early church, but he also thinks about these questions with interesting subtlety and sophistication. Readers will have to engage carefully the issues of memory, identity, effective history, and ecclesial politics in order to think with Bockmuehl about the way he construes the evidence. Protestants are not always quick to remember that no disciple of Jesus has been more important to Christianity than Peter. Bockmuehl's book displays with elegance and erudition some central features of this fact's historical shape."

"[An] engaging volume. . . . This thoughtful study of the church's memory of the sometimes shaky 'rock' on which it rested is a welcome contribution to the study of early Christianity."

"Spectacular. . . . Bockmuehl, a consummate scholar, does not sacrifice clarity for a demonstration of intellectual perspicacity. Readers will need to engage issues of memory, identity, effective history, and eccesial politics if they want to think with Bockmuehl. If biblical scholars follow his lead, Peter may emerge again with the prominence and preeminence that were undeniably distinctive to his persona in primitive Christianity. To approximate the Peter of 'living memory' requires one to consider opposing views--of Catholics and Protestants as well as East and West. As readers deal with the history and traditions, often Bockmuehl will reward them with some provocative thought. . . . Both novices and seasoned scholars will find this book to be a valuable resource. . . . Highly recommended. Upper-division undergraduates through researchers/faculty."

"As Bockmuehl shows in this book, 'accessible' doesn't have to mean a work less solidly supported by references to primary data and engagement with relevant scholarship. Instead, he combines clear exposition of the issues and his views with helpful notices and engagement with the views of other scholars, which will enable students and other serious readers to conduct their own research further into matters."

"Over the last decade, few NT scholars have given more sustained attention to Simon Peter than Markus Bockmuehl. In this work on Simon Peter's legacy in Scripture and in memory, Bockmuehl is intending to complement his earlier, more exhaustive work The Remembered Peter. Although Simon Peter in Scripture and Memory covers much of the same ground as the earlier volume, it is intended to be a more accessible volume for students and non-academics. Moreover, Bockmuehl also moves the conversation forward in several interesting ways, particularly in his 'case studies' in the third part of the book. . . . One cannot help but admire Bockmueh's ability to combine a careful assessment of traditional scholarly sources with his creative consideration of non-traditional material such as archaeological sites and early Christian works of art. . . . There can be little doubt that any serious student of Simon Peter and his historical, theological, and ecclesial legacy must interact with Bockmuehl's work in his previous volume, in this volume, and in his future work on Simon Peter."

"This volume is an excellent work that contributes to a growing body of ecumenically spirited studies on the figure of Peter in the New Testament and its meaning for ecclesiology today. Through his careful and measured study, Bockmuehl . . . transcends the classic, denominationally tinged debate that sees Peter as a conservative institutional force over against the evangelical freedom of Paul. Instead, Bockmuehl affirms, the role of Peter in the New Testament complements that of Paul. Peter is one whose mission was to be an abiding source of unity in the midst of the dynamic diversity of the early church. He traces the 'memory' of this Petrine role in the church's later tradition and contends that this Petrine ministry of finding unity in the midst of diversity is a challenge for both Protestants and Catholics today. This is a book that makes a significant contribution to that discussion, so vital for the unity of the church."

"The book is evidence of a larger recent upsurge of academic interest in early Christian origins and its aftermath, i.e., in its reception or effective history in general (to include the history of the interpretation of biblical texts) and in second-century Christianity in particular. It stands as a genuine contribution to the field. It weds the insights of historical-critical reconstruction of Peter, the NT's depiction of Peter, and the second-century living memory of Peter into a fascinating and largely convincing portrait. . . . The work is a solid, if exploratory, contribution to Christian origins and its subsequent reverberations into the following century. It should also stand as a wake-up call to more than a few within the Protestant Church to stop (mis-)reading the entire NT through Pauline-shaped lenses."

"[Bockmuehl's] expertise in early Christian studies is evident in this interesting book that examines the living memory about Peter through the first two centuries of the Christian church. . . . Bockmuehl's book is a helpful addition to modern Petrine studies, and it is a good reminder not to give Petrine studies short shrift. It is a testament to the importance of living memory and an example of the importance of Patristic studies today. The book is a thought-provoking study, and it can motivate the reader to do further research in this area."

"In recent years, scholarly interest in Peter has greatly increased beyond the previous singular interest in the relationship of Peter to Paul, and this book is a worthy addition to the current discussion. . . . This is an important, imaginative, and engaging book on the apostle, as early Christians remembered him. It is well worth the purchase and the time to read."

"[Bockmuehl] attempts to make his scholarship more accessible for graduate and upper-level undergraduate students, although it still retains a good amount of academic substance. . . . Bockmuehl's book is an interesting and insightful study on how reception history can shed light on understanding an important biblical figure."

"This study on Peter in the earliest centuries after his death comprises a decade of research on reading early Christian sources and applies an effective historical methodology, resulting in a fresh portrait of this chief apostle. . . . Bockmuehl's Peter is consistent with what is found in the New Testament witness. . . . This valuable book fits into a growing trend of researching the early remembrances of New Testament figures as a means to encounter them from a fresh perspective."

"[Bockmuehl] aptly demonstrates his expertise and creative ability to shed new light on Peter while advancing the field of New Testament studies. . . . Bockmuehl brings a decade of research on Peter to the subject. His intended audience is graduate and senior undergraduate students as well as teachers and pastors.. . . . [An] excellent and accessible book. Bockmuehl's interaction with recent scholarship is lively; his coverage of ancient sources is wide-ranging; his careful analysis on important interpretive issues is convincing. . . . Through his findings, Bockmuehl, in many ways, challenges sometimes long-held, historical-critical conclusions . . . about Peter and these early-Christian sources. . . . His case studies successfully contribute select and sometimes surprising insights through the critical and dialectical reading of memory in Scripture, art, archaeology, and early-Christian texts. This first-rate book is essential for study of Peter for both Protestants and Catholics, and undoubtedly will greatly benefit not only Bockmuehl's intended audience but also scholars who would apply this alternative, positivistic approach to other texts and figures of the New Testament."

"[Bockmuehl's] method offers a fresh perspective on Peter. . . . A valuable and enlightening contribution to Petrine studies. . . . This book is a commendable contribution to the biblical and historical study of Petrine memory. Bockmuehl, at times, appears to be tentative in his conclusions, but that is to his credit given the variety of documents and the lack of information he works with. However, he is able to analyze carefully various strands of this memory and, in doing this, brings out insights that make the book a valuable tool in current ecumenical studies."