Sidewalks in the Kingdom

New Urbanism and the Christian Faith 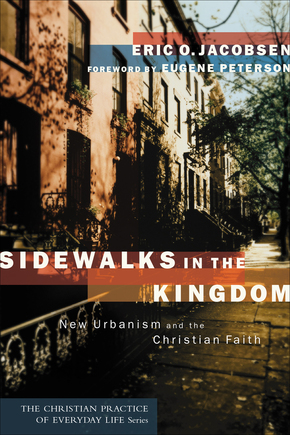 There has been much ink spilled in the evangelical community about "claiming our cities for Christ" and plenty of lip service paid to the need to address urban concerns. But according to author and pastor Eric Jacobsen, this discussion has remained far too abstract. His Sidewalks in the Kingdom challenges Christians to gain a practical, informed vision for the city that includes a broad understanding of the needs and rewards of a vital urban community. Building on the principles of New Urbanism, Jacobsen emphasizes the need to preserve the nourishing characteristics of traditional city life, such as shared public spaces, mixed-use neighborhoods, a well-supported local economy, and aesthetic diversity and beauty.

Sidewalks in the Kingdom includes three appendices: a glossary of urban vocabulary, an annotated bibliography of related sources, and a detailed description of the principles and goals of New Urbanism. Pastors, city-dwellers, and those interested in urban ministry, politics, and development will be both encouraged and informed by Sidewalks in the Kingdom.

"The churches have been reluctant to take on contemporary culture. Not so Eric Jacobsen, who tackles the most difficult and hopeful issue--centering the city around the church. Eric is a knowledgeable guide, a practical soul, and a most engaging writer."-Albert Borgmann, author of Power Failure: Christianity in the Culture of Technology

"This book offers one of the most robust defenses of the public, the communal, the shared that I've ever read. It is a powerful riposte to the privatizing creed of our age, and it makes painfully clear how much of our contemporary life is not only un-Christian, but uninteresting as well."-Bill McKibben, author of The End of Nature and Enough

"Eric Jacobsen presents both an earnest and passionate set of reflections on the city and its significance to human spirituality. He combines theory, theology, and practice in a way that can help people gain a new understanding of their own relationship to their own cities."-Daniel Kemmis, author of The Good City and the Good Life

"This is a book I have been needing for a long time! What I find in the book has kept its promise too! We as Christians who live in cities and towns have a mandate to work toward making the streets and squares and parks in our cities not only safe but humane and people-friendly. Jacobsen has given some very helpful biblical guidelines for architects, pastors, city planners, and ordinary citizens too. I am enthusiastic about his book."-Earl F. Palmer, University Presbyterian Church, Seattle, Washington

"Sidewalks benefits from Jacobsen's extensive reading in the literature of New Urbanism and is a valuable primer in concepts such as pedestrian continuity, pedestrian scale, infill, and built environment. But Jacobsen also takes us on a theological journey through Scripture, from the garden of Eden to Jerusalem and finally to the scene of our ultimate redemption, the Heavenly City. If Christ-followers are to live out eternity together in a city, then perhaps we ought to be thinking more about the cities in our here-and-now. If the biblical narrative moves away from the garden and toward the city, then perhaps we ought to be wary of the trend in our historical narrative that is moving us away from the city and toward individualized existence in the suburbs."--Regeneration

"More than anything else, Jacobsen wants us to see our cities not as abstract places notable only because they contain people to be saved, but as real places in which real people-who are neither beasts nor angels-tread on holy ground. As Jacobsen forcefully demonstrates, these people need and deserve the economic, social, and even aesthetic conditions necessary to live holy lives."--Matt Donnelly, Prism

"In many ways this is a provocative book. . . . The small narratives of neighbourhood life are well told alongside biblical and New Urbanist commentary. I particularly appreciated [Jacobsen's] evaluation of the notion of 'taking cities for Christ.' Consequently I would recommend this to any Urban Bulletin reader wanting to provoke Christian friends in more comfortable areas into thinking about these issues."-Andrew Davey, Urban Bulletin

"This readable . . . volume gives the average Christian reader a window into the problems associated with contemporary urban (and suburban) life and mediates upon the ways they may be ameliorated. . . . [Jacobsen] sets forth creative, yet realistic, prescriptions in order to refurbish community life on a more humane scale."--Jeff McAlister, First Things

"It takes an innovative Christian thinker to convincingly frame . . . issues of city planning as fundamental to Christian discipleship, and Eric Jacobsen pulls it off in Sidewalks in the Kingdom. . . . He delicately but firmly makes the case that the New Urbanism movement, with its advocacy of public spaces and variety in neighborhoods, is of urgent importance to the church and needs its support. . . . Jacobsen's book is a useful introduction to the New Urbanism movement."--Nathan Bierma, Books & Culture

"People of all religious persuasions can find wisdom in this plain-spoken portrait of how humanity and culture are enriched by the informal social contacts of city life. . . . Sidewalks in the Kingdom is a powerful call for Christians to endorse our cities in the same way they have embraced our natural environment."--Avery Yale Kamila, GreenMarketReport.com

"Jacobsen . . . is generous; generous in that the sense that when he argues a point, he does so without so much of the usual condemnation and vitriol that characterizes most activism. This is why Sidewalks in the Kingdom is such a captivating read. . . . I highly recommend Sidewalks in the Kingdom as an introduction to the concepts of New Urbanism presented in a form that is neither off-putting nor rabid, but actually very attractive."--Eric Hurtgen, Relevant

"Add the name of Eric Jacobsen to that of St. Augustine and Jacques Ellul as postbiblical Christian writers of significance about the city. . . . This timely, wise, balanced, biblically rooted and practical tract deserves the attention of all Christian citizens who live in cities and suburbs--not just pastors, architects, politicians, and city planners. . . . Jacobsen makes all this highly understandable with generous use of practical examples. . . . A challenging, theologically invigorating, and potentially life-changing stroll down the sidewalks of the kingdom."--John Bolt, Calvin Theological Journal

"There are numerous Christian books on missions to the city. This very readable and practical volume is different. . . . What makes Jacobsen's book so interesting are his creative, yet realistic, ideas about renewing city life on a more human scale."--Johan D. Tangelder, Christian Renewal

"A thought-provoking first work in what may one day be an important field of inquiry: the intersection of Christianity and urban planning. . . . Little work is available about the correlation between urban planning and Christianity, so Jacobsen's study is a welcome contribution."--Christopher Eads, The Cresset

"The book would most naturally find an audience with Christians of one stripe or another. Budding architects who want to think theologically about their work will find much of value here; so also would clergy and church leaders who might be tempted to vacate the city and relocate to a 'big box' facility near the highway, awash in a sea of parking. It might also be recommended to laypeople, individually or in groups, who want to think more critically, and in a more intentionally Christian fashion, about the communities in which they live. . . . The series of books to which this volume belongs, The Christian Practice of Everyday Life Series by Brazos Press, examines otherwise mundane topics such as what one eats, or where one lives in the light of Christian theological reflection. These volumes offer critique of common practices found in Western culture, especially its American strain, and then set out to show the difference Christian convictions can make in people's daily lives, focusing particularly on what sorts of practices flow out of those convictions. The resulting works so far have been widely accessible, sensibly practical, and genuinely creative in bringing theology and practice into conversation with each other. Eric Jacobsen continues this tradition with his fine addition to the series."--Jason A. Fout, Mark Moreno, Reviews in Religion and Theology

"Jacobsen outlines a theological basis for reclaiming neighborhood values. . . . He continues by not only laying out the principles of New Urbanism, but also firmly grounding them in the biblical narrative."--Kirstin Vander Giessen-Rietsma, Pulpit Helps

"[Jacobsen's] challenge is clear: for Christians to think more theologically about their cities and the redemptive possibilities therein. . . . He offers creative, sometimes idealistic and sometimes realistic, prescriptions. This book is an enjoyable read. Jacobsen, being the associate pastor of a Presbyterian Church in Montana, and not an architect, sociologist, or geographer, uses languages and explanations that make his book largely accessible. Its structural simplicity also makes it an easy read. . . . This book is significant for its content and as a representation of an admirable (though not Christian) movement."--Ruth Wivell, Stimulus

"Jacobsen offers a very helpful, beginners' contribution to how church folks can care about their towns--large or small--and how thinking about stuff as mundane as zoning and sidewalks really matter in God's good world. . . . One need not be a city planner or architect to read this. Highly recommended."--Byron Borger, heartsandmindsbooks.com

"Jacobsen's wonderful little book . . . adds something significant to [the] construction of a more complex common good. . . . Jacobsen forces Christians to realize the deep impact a city's physical architecture can have on their social, political, and spiritual health."--Matthew Kaemingk, Comment

"I would recommend [this book] for any Christian who wants to think carefully about the built environment. . . . This wonderfully written book considers from a Christian and pastoral perspective how we make our cities, and introduces some very orthodox ideas that may startle even longtime believers."--David Greusel, WORLD Magazine