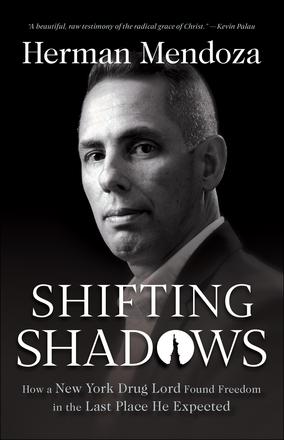 "An amazing story . . . that will encourage you to keep on keeping on."--Luis Bush, author of The Yes Effect

Herman Mendoza built his kingdom in Queens, New York. He made a fortune selling cocaine with his brothers up and down the Eastern Seaboard. He had apartments around the city for his mistresses and a home in the Poconos for his beautiful nuclear family. But when Herman and his brothers were busted in a large-scale crackdown, his kingdom crumbled. Ready to kill himself rather than live behind bars, Herman instead came face-to-face with the all-consuming love of God. He would never be the same.

Today, Herman shares his story at every opportunity, knowing that it may play a part in someone else's journey into a relationship with Jesus. An engaging and fast-paced read, Shifting Shadows offers hope to those in despair, and shows all of us the lengths to which God will go to bring a troubled soul home.

"In a culture riddled with addictions, this is an uplifting story worthy of our attention."--CANDY MARBALLI, president and CEO of the Prayer Covenant

"This memoir crosses all cultures and shows how God's grace can rescue a lost soul regardless of how hard he or she hits rock bottom."--JOEL FREEMAN, PhD, director and producer of Return to Glory; former NBA chaplain

Herman Mendoza speaks nationally and internationally on college campuses, in churches, at Christian conferences, and in prisons--with his ministry spanning four continents. He is an associate pastor at Promise Ministries International and is the director of Powerhouse Kids Ministry in New York City. His wife and their three children share in the ministry.