Sharing Your Faith With a Hindu 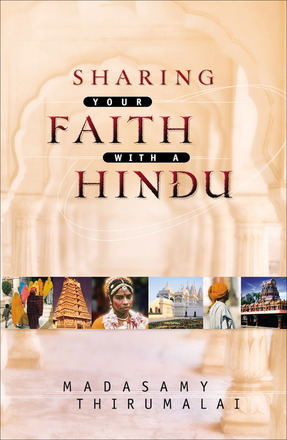 A Unique Witnessing Resource From a Former Hindu

How do you share your faith with your Hindu neighbor, colleague, and friend? The Hindu population in North America is growing steadily, now numbering over one million people. However, most Christians know little about Hindu beliefs and practices.

Madasamy Thirumalai, who was raised a Hindu and became a believer in Jesus more than twenty years ago, explains historical and contemporary Hindu customs, ritual practices, and intellectual obstacles to Christianity, and offers practical tips and tools on how to win Hindus to the Lord. Sharing Your Faith With a Hindu is an effective guide for Hindu evangelism both in the United States and abroad.

"Since 9-11, we've seen a great focus upon Islam and its people and teachings. But here's a book on the increasingly present Hindu religion, written by a former Hindu who is now a Christian and a professor at a college of missions. People in many metropolitan areas see and interact with Hindus often, perhaps at the supermarket or in the neighborhood. Many believers are intimidated by the thought of witnessing to them. It need not be that way, according to this author. There is something comforting and reassuring about reading and learning from a book like this, whose author was once a Hindu.

Before getting into a study of Hindu beliefs, Thirumalai gives a personal testimony and then shares valuable insight to just who Hindus are and differences among the religion's adherents.

If you have Hindu neighbors or other acquaintences, get this book. It will help you understand where they are coming from and how to effectively present the gospel to them so they can be set free." - The Baptist Bulletin, Jan. 2003