Secret Faith in the Public Square

An Argument for the Concealment of Christian Identity 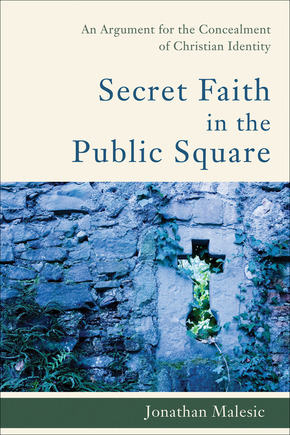 "Those interested in the ongoing discussion of the relation of Christianity and culture will want to read this book, as will any theologian interested in what it means to preserve the distinctiveness of Christianity in contemporary America."--Bill Reddinger, Religious Studies Review In this groundbreaking and provocative book, Jonathan Malesic examines the tradition and practice of keeping faith separate from public life. Going against the general theological trend of advocating an ever more visible presence for Christianity in American public life, he argues that the best way for Christians to be caretakers of their tradition and to love their neighbors selflessly is to conceal their religious identity in the public square. The alternative--insisting on Christianity's public visibility in politics, the marketplace, and the workplace--risks severely compromising the distinctiveness of Christian identity.

Delving deep into the Christian tradition, Malesic explains that keeping Christian identity secret means living fully in the world while maintaining Christian language, prayer, and liturgy in reserve. He shows how major thinkers--Cyril of Jerusalem, Søren Kierkegaard, and Dietrich Bonhoeffer--sought to protect Christian identity from being compromised by the public sphere. He then shows that Christians' dual responsibilities for the tradition and for the neighbor must be kept secret.

"Against all the arguments that religious conviction should be manifest in public life, Jonathan Malesic offers perhaps the most theologically profound, fruitful, and rigorous challenge: the real truth of Christianity cannot be worn like a flag pin on a politician's lapel. It occurs in secret and in silence. True subjectivity of faith precludes its manifestation in public life, and all attempts to display it in such a way only profane it and further pervert the church as a community of 'secret disciples.' This genuinely fresh, freethinking book displays the independence of mind and life for which it argues. Lucidly written and crisply argued, it is a significant contribution to discussions in the field and will be a wonderful counterpoint to the dominant narrative in classes about religion and public life."--Charles Mathewes, associate professor of religious studies, University of Virginia; editor, Journal of the American Academy of Religion

"Using 'secrecy' in the positive sense of one who can 'keep a secret,' Malesic explores ways in which believers can properly bring the resources of their faith to animate the societies of which they are a part. Reminiscent of the 'Letter to Diognetus,' the strategy he proposes would eschew any overt attempts at 'witness' precisely to safeguard the integrity of the task entrusted to believers to act as leaven. Yet what of those institutions through which Christians have long sought to leaven the society of which they are a part? Going on to explore how this strategy would apply to them should offer strategies to move beyond the crypto-Christendom he seeks to avoid."--David Burrell, CSC, professor of ethics and development, Uganda Martyrs University

"Malesic's thesis is striking and provocative: we should conceal our faith in order to protect it from being absorbed and prostituted in our voracious secular culture. Readers may not be persuaded, but by the end of the book they will find themselves richly rewarded with many fresh insights into the possibilities for Christian witness in our strange, postmodern era. A truly fresh contribution to the important debate about faith, politics, and culture."--R. R. Reno, professor of theological ethics, Creighton University

"Jonathan Malesic calls Christians in America to conceal their identities in public life as a form of therapy that unhinges Christian witness from its accommodation to public expectation and reward. By credibly challenging the assumption that Christian identity is only authentic if it is publicly visible and explicit, Malesic has transformed the conversation about the relationship of the church to the world at the beginning of the twenty-first century. This book should be read and discussed widely."--Bryan Stone, E. Stanley Jones Professor of Evangelism, Boston University School of Theology

"Malesic offers a theological and philosophical treatise on the need for Christians to resist mass culture and its corrupting accommodation to worldly ideas by keeping their faith a secret. Malesic traces this idea to fourth-century St. Cyril of Jerusalem, who, in an effort to inspire awe in candidates for conversion, hid from them certain doctrines until after their baptism. The book then explores the thought of Søren Kierkegaard and Dietrich Bonhoeffer, who also argued for secrecy lest Christianity fall prey to consumerism, comfort or complacency. The book will be appreciated by theologians who worry that the evangelical zeal to make converts may inevitably conform more to American capitalism than to Christian creeds. . . . [This book] rewards readers interested in the ideas of a trio of Christianity's most complex theologians."--Publishers Weekly

"[Malesic] makes the case that we have nearly ruined the watching world's perception of the gospel, indeed, nearly ruined the gospel itself, by allowing it to be too tainted by political ideologies of the left and right. . . . Obviously, the real truth of Christianity cannot be reduced to a political pin on a politician's lapel (or a protester's sign). Granted. Is his call for concealment the answer? This really is worth considering and talking about."--Byron Borger, heartsandmindsbooks.com

"Importantly, Jonathan Malesic's Secret Faith in the Public Square is largely in agreement with Hauerwas' critique of the role played by Christians in American public life. Malesic, like Hauerwas, believes that the Christian faith should be clearly distinctive and that Christians must struggle to avoid accommodation to an unchristian culture. However, Malesic's prescription differs from that of Hauerwas, and this book is largely meant, it seems, to offer Christians sympathetic with Hauerwas' views an alternative way forward. . . . This is a book that should be of interest to anyone concerned about the integrity of Christian worship and witness in secular culture."--Bryan C. Hollon, Christian Scholar's Review

"I was genuinely intrigued by Malesic's proposal. I hope it gets the consideration it deserves from the guild, and that it finds its place among the ordinary faithful."--Daniel B. Clendenin, journeywithjesus.net

"[This volume] offer[s] welcome encouragement for Christians to be modest and humble as they participate in social life. . . . Malesic presents an intriguing, contrarian thesis that advances an initially outrageous claim and invites readers to think outside the box. . . . Malesic's work is valuable for raising questions too often ignored in typical discussions about Christianity and culture and reintroducing little known subcurrents that have periodically reappeared in Christian thought. His principal concerns--that Christianity is distorted when Christian identity is used for social advancement and that works of love should not be done for purposes of self-glorification--are poignant and pressing. Amidst the considerable pressure that most Christian communities place on their members to make their faith visible to the world, Malesic's contrarian suggestion about concealment ought to provoke believers to ask hard questions about how and why they present themselves as Christians publicly."--David VanDrunen, Journal of Markets & Morality

"There is much that is refreshing about [Malesic's] treatment, its chief merit being the attention that is given to the local nature of the problem. The concatenation of faith and politics that has become the standard in America is historically unique, and calls for a tailored theological response. . . . Malesic's emphasis on taking account of local context gives him a supple attentiveness to the settings in which his three theological interlocutors also espoused quite disparate forms of Christian secrecy: Cyril of Jerusalem, Søren Kierkegaard, and Dietrich Bonhoeffer. These discussions of history give welcome ballast to his constructive argument, and commit him to the task of finding a continuity in the history of Christian thought on these issues. In so doing he reopens the question of the relevance of this tradition and with it of Jesus' enigmatic teachings on secrecy in chapter 6 of the Sermon on the Mount."--Brian Brock, Studies in Christian Ethics

"Many of us who grew up in the evangelical sub-culture at the end of the twentieth century are intimately familiar with its strange brew of revival religion, middle-class family values, and postmodern identity politics. With this backdrop, Jonathan Malesic's new book, Secret Faith in the Public Square, is both refreshing and surprisingly retro in its call for the concealment of Christian identity in public life. . . . Malesic ably assembles a composite theology of how we might quietly preserve and hand on the Christian tradition in a society which prizes boisterous free expression and public identity. . . . Malesic does the Church a great service by challenging the unspoken assumptions of contemporary American religious life."--David Paul Henreckson, Political Theology

"Malesic argues that, in light of public displays of Christian commitment, particularly by the religious right and among evangelicals, a return to Christian secrecy is a therapeutic corrective to a corrosion of Christian identity. Malesic offers a well-qualified argument, thoroughly grounded in theology."--Nathan G. Jennings, The Living Church

"Malesic urges Christians to do good works in public while concealing their Christian identities, an argument he makes with the help of Cyril of Jerusalem, Kierkegaard, and Bonhoeffer. The book's strength is in the interesting discussion of these thinkers and in how it brings to our attention the serious problems consequent to blurring the distinction between what it means to be a good Christian and what it means to be a good citizen. . . . Those interested in the ongoing discussion of the relation of Christianity and culture will want to read this book, as will any theologian interested in what it means to preserve the distinctiveness of Christianity in contemporary America."--Bill Reddinger, Religious Studies Review

"The book will certainly allow for heated discussion in a worldview course and spark much original debate."--Haddington House Journal

"The book is well researched and carefully argued. Malesic concisely, but effectively, introduces and engages with Cyril, Kierkegaard, and Bonhoeffer. . . . There is no doubt that the main issue that the book addresses is one that needs to be addressed: the issue of Christian identity and the entanglement of the church with culture. . . . Malesic is engaging in a conversation that is necessary for the church in this post-Christian age. . . . The book deserves a reading because of its unique thesis and provocative suggestions as to the way forward for the post-Christendom church. Anyone hoping to remain engaged with missional thinking and fresh ideas regarding what the shape of mission in contemporary culture should look like will do well to engage with Malesic's proposals in this volume."--Lee Beach, Cultural Encounters