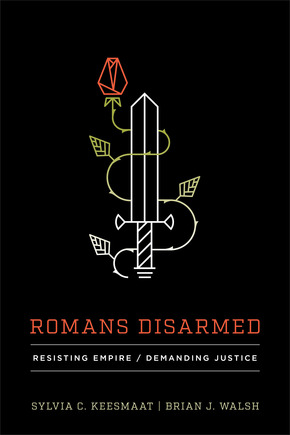 Globalization. Homelessness. Ecological and economic crisis. Conflicts over sexuality. Violence. These crisis-level issues may seem unique to our times, but Paul's Letter to the Romans has something to say to all of them.

Following their successful Colossians Remixed, Sylvia Keesmaat and Brian Walsh unpack the meaning of Romans for its original context and for today. The authors demonstrate how Romans disarms the political, economic, and cultural power of the Roman Empire and how this ancient letter offers hope in today's crisis-laden world.

Romans Disarmed helps readers enter the world of ancient Rome and see how Paul's most radical letter transforms the lives of the marginalized then and now. Intentionally avoiding abstract debates about Paul's theology, Keesmaat and Walsh move back and forth between the present and the past as they explore themes of home, economic justice, creation care, the violence of the state, sexuality, and Indigenous reconciliation. They show how Romans engages with the lived reality of those who suffer from injustice, both in the first century and in the midst of our own imperial realities.

Contents
1. Reading Romans and Disarming Empire
2. Kitchen Walls and Tenement Halls
3. Empire and Broken Worldviews
4. Homeless in Rome
5. Creation and the Defilement of Home
6. Economic Justice and the Kingdom of Life
7. Welcoming the Powerless
8. The Pax Romana and the Gospel of Peace
9. Imperial Sexuality and Covenantal Faithfulness
10. Salvation, Lament, and Hope
Indexes

"Sylvia and Brian are two of my favorite Bible scholars. Whether you're over-churched or under-churched, they stir in you a fresh curiosity for the Bible. This new book is perfect for scholars and new Bible readers alike, and for everyone in between. They rescue one of the most misused books of the Bible from the hands of colonizers and crusaders. And they help us listen with first-century ears to the anti-imperial love story of Romans."

"If you want to hear--and experience--Paul's letter to the Jewish and gentile Christ-followers in Rome as you never have, read this book. And re-read it. Study it in your church circles. Talk about it with your friends. Assign it in your courses. As with their earlier Colossians Remixed, Keesmaat and Walsh have once again interwoven close textual reading of the New Testament (they clearly love the Scriptures!) with its unabashedly Jewish roots and its explosive relationship to the Roman imperial context. Most importantly, they bring the message of Romans into dialogue with our lives today, as we struggle to be faithful to the good news of Messiah Jesus in our own imperial context."

"In 1918 Karl Barth published his commentary on Romans, which ignited a profound theological turn. A century later, Keesmaat and Walsh write into the headwinds of Trumpism, deepening social disparity, ecological crisis, and endless war. Building on recent scholarship, this brilliant study engages the original audience, who labored under the shadow of empire, in a way that brings its message to life for similarly struggling North American Christians. The authors employ a robust imagination, an interlocutor, and keen historical literacy to free Romans from its captivity to dogmatic and pietistic interpretations, restoring it to its social context (with all its disturbing parallels to our own). The result is a fresh and committed reading by two of our generation's best interpreters of Word and world. May it, too, inspire a turning!"

"You (and I!) have never read Romans like this before. It has been weaponized by some and reduced to abstraction by others as has perhaps no other biblical book. Sylvia Keesmaat and Brian Walsh have disarmed such uses and returned it to the real, flesh-and-blood world. The sheer immensity of the gospel, announced as it is in the midst of the frightening, frustrating, groaning grind of actual life, is nothing short of exhilarating. The scholarship herein provides a deep foundation for an imagination that is even greater. Keesmaat and Walsh introduce to the hermeneutic process both a present-day interlocutor, who raises many of the questions and objections you may have yourself, and two residents of ancient Rome, who 'hear' the epistle as it is first read, granting us fresh access to the world we live in and how we are invested in it. The authors don't attempt to wrestle from the text (yet again) Paul's systematic theology of the gospel; instead, by rooting their exegesis firmly in history, the practical and revolutionary nature of the gospel is revealed. Here the empire of any era, including our own, is disarmed and its caesar cast down; its perverse values repudiated; and the liberating, home-making, salvific power of a greater Lord and King is revealed."

Greg Paul, Sanctuary Toronto community member and author of God in the Alley and Resurrecting Religion

"In Romans Disarmed, Keesmaat and Walsh use an artistic mix of story, poetry, imaginative discourse, and solid biblical and social-cultural-historical background that allows the reader to understand the book of Romans from an alternative, and I believe more accurate, point of view. Paul's letter to the Romans was not written from an enlightenment-bound worldview and this book dislodges any such notions. I am grateful for the authors' skill in helping us all view the apostle Paul's world and ours through an unconventional and more preferable lens; one that has tremendous practical application for us today."

Randy S. Woodley, author of Shalom and the Community of Creation: An Indigenous Vision

"Exceptionally well written, organized, and presented for the benefit of clergy, academia, and nonspecialist general readers with an interest in the subject, Romans Disarmed: Resisting Empire, Demanding Justice is an extraordinary and unreservedly recommended study of Paul's Letters to the Romans for all members of the Christian community."

"This excellent book looks at the context in which the apostle Paul wrote Romans, then seeks to discern a dynamic equivalent to our context."