Roman but Not Catholic

What Remains at Stake 500 Years after the Reformation 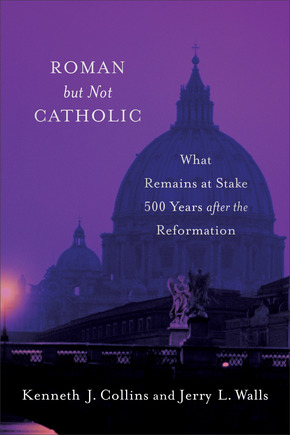 This book offers a clearly written, informative, and fair critique of Roman Catholicism in defense of the catholic faith. Two leading evangelical thinkers in church history and philosophy summarize the major points of contention between Protestants and Catholics, honestly acknowledging real differences while conveying mutual respect and charity. The authors address key historical, theological, and philosophical issues as they consider what remains at stake five hundred years after the Reformation. They also present a hopeful way forward for future ecumenical relations, showing how Protestants and Catholics can participate in a common witness to the world.

Contents
Introduction
1. What We Have in Common
2. Tradition and the Traditions
3. Scripture: No Greater Authority?
4. Rome or Nothing?
5. Revelation, Biblical Authority, and Creed: How to Affirm Catholic Faith without Affirming the Claims of Rome
6. The Church, Part I: Excavating Rome's Exclusive Ecclesial Claims
7. The Church, Part II: Are Other Traditions Ecumenically Understood?
8. "You Are Your Own Pope": The Tu Quoque Objection
9. Sacraments: Baptismal Unity and Separated Suppers
10. Priesthood: From Presbyter to Priest, from Table to Altar
11. The Papacy: Shaking the Foundations
12. Machiavellian Machinations and More: The Later History of the Papacy
13. Papal (Im)Probabilities
14. Protestants in the Crosshairs: Popular Roman Catholic Apologetics
15. Mary: Why She Matters
16. Mary Again: From Dogmatic Definition to Co-Redeemer?
17. Justification Roman Style
18. Justification: The Joint Declaration and Its Aftermath
19. Regeneration, Assurance, and Conversion: A Minor Chord in Roman Catholic Theology?
20. The Deeply Divided Church of Rome: The World's Largest Pluralist Christian Denomination?
Conclusion: A Come to Jesus Moment
Indexes

"'Things fall apart; the center cannot hold.' The poet Yeats probably did not have the Roman Catholic Church in mind, but Collins and Walls do, and they make a vigorous case here for why Rome should not insist on being the exclusive center of the catholic church. Roman centricity deconstructs true catholicity by suggesting that Orthodox and Protestant churches are deficient; it similarly undermines canonicity (i.e., biblical authority) insofar as sola scriptura is virtually displaced by sola Roma. Collins and Walls remind us that what continues to divide Christians 500 years after the Reformation are not simply disagreements over doctrine or the authority and interpretation of Scripture, but differences over the nature of the church and the meaning of catholicity."

"For decades, there has been a spirited polemic against Protestantism that sought intellectual solace and resolution in converting to Rome. It was only a matter of time before somebody, somewhere, would challenge this whole operation. Collins and Walls have done so in a way that lowers the temperature but does not shirk the full range of issues at stake. The claims of the Roman church are subject to searching examination in an irenic yet candid assessment. No doubt the debate will continue; we can only hope that the tone and content will be better as a result of their efforts."

"The thesis of Roman but Not Catholic is that 'the Church of Rome is not sufficiently catholic,' and authors Collins and Walls support that admittedly ironic claim irenically but stringently. This is a book every Protestant who feels some pull toward Rome must read before converting. It should also be read by every Protestant who knows a fellow Protestant moving toward Rome."

"The 500th anniversary of the Protestant Reformation has spawned a number of attempts to explain why it happened and why it still matters. In this volume, Kenneth Collins and Jerry Walls paint a picture of Catholicism that is broader and more authentically traditional than the one professed by the Roman church. They do so with both clarity and charity and demonstrate that evangelical Protestantism has a strong claim to be the truest expression today of the faith once delivered to the saints."

"[A] bright shining [example] of how the conversation [between Protestants and Catholics] should be engaged--with warm hearts, respectful attitudes, and seriousness about theological detail. . . . [The authors convey] theological substance with clarity, and their work is extraordinary for its far-ranging scope and depth of analysis. . . . Collins and Walls are ideally suited to author this volume. . . . This book is thus a tutorial in 'deep ecumenism,' an approach to Christian dialogue that does not gloss over important or difficult differences but rather treats them in a spirit of mutual respect and charity."

"A well-reasoned, informative, and truly helpful book about Roman Catholicism. [This book] is a serious and substantive account of what Protestants can't accept about Roman Catholic theology. . . . Throughout, Collins and Walls go deeper into the argument than any book I know of. . . . This is no defensively short-sighted attempt to fend off Rome's claims, but a real wrestling with the underlying issues, with considerable depth and refinement. . . . It will be . . . useful for pastors and teachers to read for themselves so they can replicate, mobilize, and contextualize the arguments in it. . . . Roman but Not Catholic is likely to earn a wide readership and long lifespan, because while it is definitely a pointed, polemical, Protestant argument, it also treats Roman Catholics as fellow believers rather than as pagans. . . . There's a real need for clear and honest polemical literature about serious Christian differences, and Collins and Walls have raised the standard for how they should be written."

"If you've encountered the phrase, 'to be deep in history is to cease to be a Protestant' (coined by John Henry Cardinal Newman and oft-repeated today), and if you've felt some frustration that you couldn't voice precisely why that's not true, Roman but Not Catholic by Jerry Walls and Ken Collins is a book for you. Roman but Not Catholic is simply the best and most complete book that has been written on Roman Catholicism in its historical totality to date. . . . This is a book that I wish had been written in the 1970s, when I was first looking at the question of whether I should remain Roman Catholic. . . . These gentlemen have provided a tremendous service to the one true church, and I highly recommend this book to you."

"Collins and Walls dissect commonly known areas of disagreement between Protestants and Catholicism. The fun, however, is in how they add their own unique twists, inside information, and corrections to misinformation. . . . They use history, sociology, theology, Scripture, philosophy, and logic to address their concerns. Many personal asides punctuate the book with warmth, transparency, and even humor. In the final assessment, the authors never throw Catholics out of the fellowship of true Christian faith. They do, however, dismantle the many dubious extras of Catholic non-essentials. Surely this book will be used in university and seminary classes. However, I think it also should be used as a study guide for those who need to be able to converse intelligently about the Catholic faith and for those who need to reaffirm the importance of Sola Scriptura, Sola Gratia, Sola Fides."

"[An] excellent book. . . . [The authors] open the book very irenically with strong expressions of appreciation for the RCC [Roman Catholic Church] and they explore the common ground between it and many Protestants. . . . But then they launch into a very calm but critical exposition of the reasons why they cannot accept the RCC--as an institution--as truly catholic. To me, their arguments are persuasive. . . . It is not your usual Protestant anti-Catholic polemic. It is truly generous and appreciative toward the RCC. . . . It is a call for the RCC to be itself but in a less exclusive way, admitting it is just one denomination of Christianity (even if the largest) and not the whole Body of Christ on earth to which every true Christian belongs even if by means of 'mystical unity.'. . . I highly recommend Collins and Walls's book. Every Protestant who is succumbing to the allure of the RCC--perhaps as a haven from the seeming chaos and confusion of Protestantism--must read it."