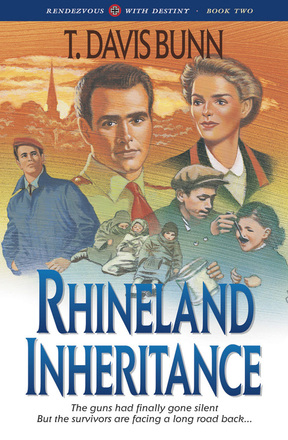 Weaving themes of historical and emotional conflict in World War II Europe, T. Davis Bunn and BHP team up to launch an explosive series, Rendezvous with Destiny. From his own years of living in Europe, Bunn captures the power and reality of this important slive of history. Readers will learn to know the men, the women,a nd children struggling to survive amid incredible carnage and destruction. They will notice the overarching theme of divine destiny as God's purposes are revealed through the circumstances and events moving and challenging these characters.

As the dust settles on the bombed-out European cities, Allied forces must divide the fallen Third Reich into occupation zones. In this historical setting for Rhineland Inheritance, Captain Jake Barnes is transferred to the American base camp near Baden-Baden, the former pleasure-resort of the Nazi elite now reduced to rubble. with rumors already running high, Barnes is assigned the impossible task of patrolling a 100-mile border zone. When he recovers a small token of stolen Nazi treasure, he also uncovers a plot that represents greed at the highest levels on both sides of the conflict.

Though hardened by his war experiences, Barnes is moved to the depths by the impoverished German children left orphaned or abandoned by the war. Reaching out to help them, he finds emotional barriers within himself dissolving--and an awakening to spiritual truth and love that almost frightens him. It is then that he glimpses a touch of compassion in the lovely diplomat who has built her own personal barriers. When his commanding officer disappears, Jake finds himself in the ultimate test of skills as a soldier and a leader of men.