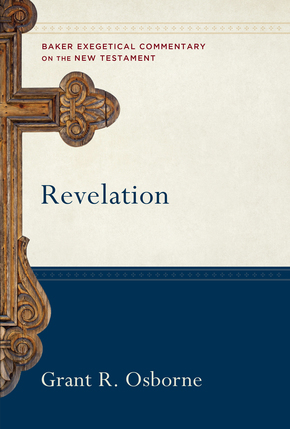 "[Shows] a thorough and comprehensive engagement with the original text, a highlighted summary and introduction to each block of material, a verse-by-verse exegesis and exposition, a further highlighted summary and 'contextualisation,' which seeks to draw out practical and relevant points of application, and, in most cases, additional notes on the Greek text. . . . An important exegetical tool."--Iain D. Campbell, Themelios

The Book of Revelation contains some of the most difficult passages in Scripture. Grant Osborne's commentary on Revelation aims to interpret the text while also introducing readers to the perspectives of contemporary scholarship in a clear and accessible manner.

Osborne begins with a thorough introduction to Revelation and the many difficulties involved in its interpretation. He discusses authorship, date of writing, and the social and cultural setting of the work. He also examines elements that complicate the interpretation of apocalyptic literature, including the use of symbols and figures of speech, Old Testament allusions, and the role of prophetic prediction. Osborne surveys various approaches commentators have taken on whether Revelation refers primarily to the past or to events that are yet future.

Osborne avoids an overly technical interpretative approach. Rather than exegeting the text narrowly in a verse-by-verse manner, he examines larger sections in order to locate and emphasize the writer's central message and the theology found therein. Throughout, he interacts with the best recent scholarship and presents his conclusions in an accessible manner. When dealing with particularly problematic sections, he considers the full range of suggested interpretations and introduces the reader to a broad spectrum of commentators.

As with all volumes published in the Baker Exegetical Commentary on the New Testament, Revelation seeks to reach a broad audience with scholarly research from a decidedly evangelical perspective. Each volume in the BECNT series interacts with the best contemporary scholarship, offering up-to-date, accurate, and authoritative analysis of the Greek text through rigorous exegesis and exposition. Central themes are developed throughout, and each exegetical unit is related to the overall message of the biblical book. Pastors and seminarians especially appreciate the combination of broad overview and in-depth analysis found in BECNT volumes, but the series is also popular with scholars and thoughtful lay readers.

"Osborne has successfully combined a thorough familiarity with the text of Revelation, a detailed knowledge of recent scholarship, and a clear writing style with a vital concern for the practical needs of students, pastors, and laity alike. His commentary invites a broad readership and will serve as an excellent text for courses on Revelation."--David E. Aune, University of Notre Dame

"This clearly written commentary reflects thorough engagement with the literature and careful interaction with the text. I find Osborne's judgments sound and well supported. This work is an excellent resource for both scholars and students and will undoubtedly take its place among the standard academic commentaries on Revelation."--Craig Keener, Asbury Theological Seminary

Praise for the series:
"This series has set a new standard in reader-friendliness with its attractive presentation that combines detailed exegetical comment on the Greek text with accessibility for those who have little or no knowledge of the original language of the New Testament."--I. Howard Marshall, University of Aberdeen

"Clear, concise, and readable. . . . Usable and affordable for wider classroom use and the needs of the average pastor. . . . If you have any significant exegetical or theological interest in the Apocalypse at all, you should have Osborne's Revelation on your shelf. . . . I highly recommend his volume both as an excellent commentary it its own right and for what will likely prove to be its wider ongoing theological significance within evangelicalism."--A. Boyd Luter, Journal of the Evangelical Theological Society

"This massive commentary on the book of Revelation represents the best of evangelical scholarship on this complex biblical book. . . . [Osborne's] commentary on the text is detailed and wrestles with the Greek text, but always provides translations of each Greek word for the nonprofessional reader. Readers will find here a fair-minded, if traditional interpretation of this enigmatic New Testament work."--Donald Senior, Bible Today

"[A] significant commentary. . . . [Osborne] has written a massive yet manageable treatment of the New Testament's concluding book. While clearly conversant with current scholarship, the commentary is written with the pastor or teacher in mind and will be of real value to anyone planning to preach in Revelation."--Michael Duduit, Preaching

"[This work] has much to commend it. This is a commentary on the Greek text and the author shows himself to be a seasoned exegete in teasing out the meaning of the text. . . . [Revelation] will serve well as a text at the seminary level and is a work which pastors and teachers will find extremely helpful."--David E. Aune, Religious Studies Review

"Osborne . . . has written what will be for many students a standard reference commentary on the book of Revelation. . . . People of similar theological perspective as Osborne (i.e., conservative, premillennial) have what will be a much-used reference work. People who come to the text with a different theological commitment have an excellent resource introducing the major issues that surround the interpretation of any given text in Revelation."--Kevin W. Larsen, Review of Biblical Literature

"This book will be helpful to students who are committed to remaining within the conservative evangelical tradition of inerrancy . . . but wish to have it explicated in dialogue with scholarly commentaries and without feeling constrained to find current events 'prophesied' in the Bible."--M. Eugene Boring, Interpretation

"Osborne's commentary combines several virtues. First, he exhaustively and clearly explains the various options for interpretation. Second, unlike other commentators who infrequently reveal their own understanding of the text, he always states which view he finds most convincing. Third, he states his views with the humility and restraint that should characterize all commentators on Revelation. . . . The commentary is accessible and readable, but the extent and depth of its exposition make it suitable only for the more serious student."--Gregory Linton, Stone-Campbell Journal

"[Revelation] shows the same hallmarks as the earlier volumes: a thorough and comprehensive engagement with the original text, a highlighted summary and introduction to each block of material, a verse-by-verse exegesis and exposition, a further highlighted summary and 'contextualisation,' which seeks to draw out practical and relevant points of application, and, in most cases, additional notes on the Greek text. . . . An important exegetical tool."--Iain D. Campbell, Themelios

"Osborne's commentary on Revelation is a clearly written, well presented and accessible work stemming from an evangelical tradition. There is an excellent introductory chapter which outlines the main themes of Revelation and the key areas of debate. Greek and Hebrew are used to effect throughout, with transliterations and translations provided. The commentary proceeds in sections, each with an introductory summary and contextualization, and, where necessary, additional notes. Scriptural, subject, and authorial indices are provided, along with a helpful list of works cited."--Helenann Hartley, Heythrop Journal

"Osborne has written a clear and, despite its size, unintimidating commentary. The effect is achieved by minimizing the footnotes (many pages have none), transliterating Greek and Hebrew, and writing in a straightforward, accessible style--in short, the scholarly foundation is pleasingly unobtrusive. . . . A volume which will be appreciated by both students and preachers who require a full, yet accessible commentary on Revelation."--Philip Kern, Reformed Theological Review

"Bible-believing readers will certainly appreciate the faith-based Osborne approach. . . . Included at the end of the book are a bibliography and helpful indices. The book is remarkable for blending scholarship with exposition. It is user-friendly and easy to read. Its more-than-800 pages render excellent reference material. It is obviously written with general readers in mind: the Greek original alphabet is emended with transliteration into the Latin alphabet and translation into English. . . . Osborne has an astonishing control of both periodical literature and commentaries on Revelation. . . . Osborne's work is an excellent resource of recent scholarship on the Apocalypse. It will no doubt finds its place on the shelves of serious students of the Apocalypse, on one hand; on the other, it is also suitable for use as a textbook in both college and seminary courses."--Ranko Stefanovic, Andrews University Seminary Studies

"Excellent. . . . Harried ministers may well like the relative brevity of Osborne's commentary as well as his section in each unit called Summary and Contextualization in which he summarizes the essential teaching and presents suggestions for application today. Osborne's commentary reads like an interesting class lecture, which is primarily an extended argument for the positions he considers most probable. . . . An important contribution to the interpretation of the book of Revelation. . . . Osborne is a careful exegete, and his work can help clarify the issues in the debate even where one may not agree. . . . I highly recommend Osborne's work as a very interesting and useful commentary that can contribute to a richer understanding of the book of Revelation."--David E. Holwerda, Calvin Theological Journal

"One of Osborne's most helpful contributions is his analysis of the text, where he attempts to avoid imposing a structure, but lets it arise from his reading of the text. . . . Readers from evangelical and fundamentalist communities are especially well served and challenged to think of Revelation in new ways."--Russell Morton, Ashland Theological Journal

Praise for the series:

"In this age of unprecedented proliferation of biblical commentary series, it is an outstanding accomplishment for the Baker Exegetical series consistently to have produced what with only rare exceptions have become the best available commentaries on the Greek text of the New Testament book or books treated."--Craig Blomberg, Denver Journal

"Rigorous exegesis by seasoned scholars with explicit evangelical commitments. This is also one of the best-designed, easy-to-read series as it includes intro matters, then each commentator's translation, commentary, and textual notes for every passage. Very reliable."--Bruce Riley Ashford and Grant Taylor, Between the Times blog