Confessions of an Evangelical Catholic 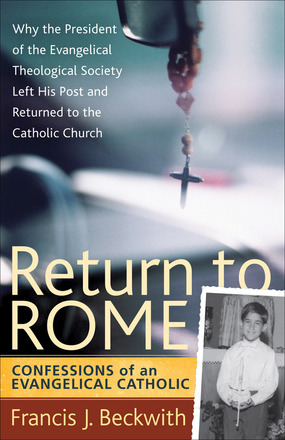 "Not only is this an excellent text for any class that considers the theological issues dividing Catholics and Protestants, it would be an interesting read for any thoughtful Christian."--James Beilby, Religious Studies Review
What does it mean to be evangelical? What does it mean to be Catholic? Can one consider oneself both simultaneously? Francis Beckwith has wrestled with these questions personally and professionally. He was baptized a Catholic, but his faith journey led him to Protestant evangelicalism. He became a philosophy professor at Baylor University and president of the Evangelical Theological Society (ETS). In 2007, after much prayer, counsel, and consideration, Beckwith decided to return to the Roman Catholic church and step down as ETS president.

This provocative book details Beckwith's journey, focusing on his internal dialogue between the Protestant theology he embraced for most of his adult life and Catholicism. He seeks to explain what prompted his decision and offers theological reflection on whether one can be evangelical and Roman Catholic, affirming his belief that one can be both.

"St. Augustine famously said that the word religion is derived from reeligere, to choose again, perhaps over and over in the sense of a reunion. Here is that reunion story once again. Frank Beckwith takes us through some of the most interesting religious and intellectual terrain of the post-1960s generation of American Catholics. Far from being a rebuke of Evangelical Protestants, who nourished him deeply, Beckwith's 'confession' should be a wake-up call for Catholics."--Russell Hittinger, University of Tulsa

"I have known Frank Beckwith for twenty years, and he is deeply in love with and committed to Jesus Christ. He, an Evangelical Catholic, and I, an Evangelical Protestant, have important differences theologically. But there are also key areas of agreement between us. This book is an irenic, intimate look at one man's journey of discipleship. But it is much more than that. I have always believed that Protestant/Catholic dialog is important. The two camps must develop awareness and partnership about the things on which they agree, clarity about the things on which they disagree, and charity with discernment about both. This book is sure to advance that dialog. I highly recommend it."--J. P. Moreland, Talbot School of Theology

"Return to Rome is the story of Frank Beckwith's homecoming. It's a story told without a trace of flippancy or disdain. Frank's love for the faith communities that have shaped his life is obvious; and it gives to his narrative a warmth and a grace that seems to me unique among contemporary conversion stories."--Ronald K. Tacelli, SJ, Boston College

"Frank Beckwith sketches vividly the sense of home that so many of us have found in the Catholic church. It is the one place where we can have it all, where we can be both Evangelical and Catholic. Nothing is lost, but all the fullness is gained. With grace and wit, Frank Beckwith narrates life as it really is: a divine comedy. And he makes us laugh with him as he tells a truly edifying story."--Scott Hahn, Franciscan University of Steubenville

"In struggling with the unwelcome appeal of the Catholic Church, Frank Beckwith gave every benefit to the thinking of his Protestant brothers and the long tradition that had formed him for so many years. The result is a careful and generous explanation of the arguments for his entering into full communion with the Catholic Church. His faith memoir will aid mutual understanding between Protestants and Catholics as well as explain why so many serious Evangelicals have found themselves (often unhappily) drawn to Rome."--David Mills, editor, Touchstone: A Journal of Mere Christianity

"Conversion stories are always interesting, but when they flow out of a great heart and mind, they do something unique: They create a convicting, holy restlessness in the reader's soul. This is what Francis Beckwith achieves in Return to Rome. Moving, memorable, unblinkingly honest but always alive with charity, Beckwith's Christian story--leaving the Catholic Church, serving the Lord as a world-class Evangelical scholar and teacher, then finally returning to his Catholic roots while treasuring his Evangelical journey--is an unforgettable witness. I highly recommend it."--Charles J. Chaput, OFM Cap, Archbishop of Denver

"A compellingly instructive story of departure and return, loss and recovery, in the Christian's way of discerning the Spirit's lead and responding in the courage of faith."--Richard John Neuhaus, author of American Babylon: Notes of a Christian Exile

"In 2007 Francis Beckwith, an esteemed scholar on ethical and political issues at Baylor University, after announcing that he had returned to the Roman Catholic Church, resigned as president of the Evangelical Theological Society. In this highly readable apologia pro vita sua, Beckwith reveals the reasons for his surprising spiritual odyssey."--Edwin M. Yamauchi, Miami University; 2006 ETS President

"Frank Beckwith's memoir is a remarkable act of Evangelical charity. He recounts his reversion to Catholicism in ways that honor his Evangelical past, even as he shows how its riches are being transformed by his new life in the communion of Rome."--Ralph C. Wood, Baylor University

"Even if, like me, you are a confirmed, convinced, and conscientious Protestant, you have to say that Francis Beckwith's Return to Rome is an interesting, intimate, and intellectually enlightening account of why he returned to the church of his baptism and his youth. Every good book faces obstacles, and I suspect that this good book will be no different. The denominationally contentious among us will read it, and attack it as Catholic apologetics, as inter-church proselytizing and warfare. It is not. Rather, it's an account, a journey, a story, a memoir, a travelogue. It gives its reasons, to be sure, but it is not apologetics. It's the rich, articulate, and memorable narrative about why one pilgrim decided to go home. Therein lies its value and its contribution. I, for one, have always been partial to pilgrims and their theological tales. This book is no exception."--Michael Bauman, Hillsdale College

"When an Evangelical becomes Catholic, his Protestant acquaintances usually wonder 'How could he do such a thing?' To them it means abandoning the Gospel. In a life story that manages to be charming and erudite at the same time, my friend Frank Beckwith answers the question, showing that taking hold of the Gospel is really what being Catholic is all about. This delightful apologion will be not only thought-provoking and informative for Evangelicals trying to decide what to make of their Catholic friends, but wonderfully encouraging for Catholics who aspire to the New Evangelization so often urged by John Paul II."--J. Budziszewski, University of Texas at Austin

"Wonderfully irenic. . . . What is unique about this story is that Francis Beckwith wants to continue to be considered as an Evangelical even as he returns to his Roman Catholic roots. . . . [T]he beauty of this book is its simple testimony to the idea that you can be an Evangelical Catholic, but that it's very difficult if not impossible to be a Catholic Evangelical--to which there are a growing number of Evangelical Catholics that bear witness."--Jan P. Dennis, christianbookreviews.net

"Beckwith's prose is gracious and he clearly refuses to demonize the evangelical fold he left behind. . . . Beckwith's story makes for fascinating reading."--Michael Haykin, ChristianWeek

"[An] irenic tone . . . characterizes the whole book. . . . Serious Protestants and Catholics alike will find this a highly readable meditation on the beliefs they share and the habits of heard and mind that still separate them."--Patrick Gray, Touchstone

"Everyone can benefit from [Beckwith's journey]. . . . Return to Rome encourages all to reflect more deeply on how to give a thoughtful answer for the hope within us."--Christopher A. Castaldo, Christianity Today

"A very personal, well-reasoned account of [Beckwith's] commitment to the truth of the Gospel."--Patrick J. Mitchell, Journal of Interdisciplinary Studies