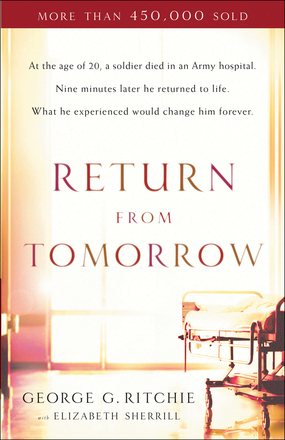 The True Story of an Uncharted Journey Through the Afterlife

As a world war raged around him, a young soldier named George Ritchie barely comprehended his own death as he left the physical world--only to return minutes later. Yet in the space between death and coming back to life, he experienced eternity.

In this riveting true story, Dr. George Ritchie shares some of the most stunning and detailed descriptions of life after death. You'll encounter other non-physical beings, travel through different dimensions of time and space, and discover a series of worlds--some hellish in their separation from life, some glorious in their heavenly brilliance. But most amazingly, you'll witness his transformational meeting with the Light of the world, the Son of God.

Hailed as one of the most amazing visions of the afterlife ever recorded, Ritchie's experience forever changed the course of his life and his understanding of the realm beyond our own--and it can do the same for you.