Rethinking the Dates of the New Testament

The Evidence for Early Composition 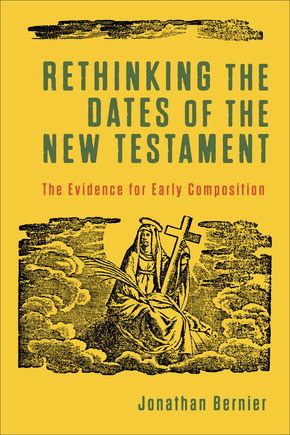 This paradigm-shifting study is the first book-length investigation into the compositional dates of the New Testament to be published in over forty years. Jonathan Bernier argues that the majority of the New Testament texts were composed before the fall of Jerusalem in 70 CE--which, with the notable exception of the undisputed Pauline Epistles, is twenty to thirty years earlier than typically supposed by contemporary biblical scholars. Bernier also considers several early Christian texts that are often dated around the same time as the New Testament--namely, 1 Clement, the Didache, the Epistle of Barnabas, and the Shepherd of Hermas. Whereas these texts are usually dated to the late first through the mid-second century, Bernier argues that most should be dated to the first century.

What emerges is a revised view of how quickly early Christians produced what became the seminal texts for their new movement. New Testament scholars, professors and students of the New Testament, pastors, and church leaders will value this work.

Introduction
Part 1: The Synoptic Gospels and Acts
1. Synchronization
2. Contextualization and Authorial Biography
Part 2: The Johannine Tradition
3. The Gospel of John
4. The Epistles of John and Revelation
Part 3: The Pauline Corpus
5. Critical Matters in Dating the Pauline Corpus
6. The Compositional Dates of the Pauline Corpus
Part 4: Hebrews and the Letters of James, Peter, and Jude
7. Hebrews and James
8. 1 and 2 Peter and Jude
Part 5: Early Extracanonical Writings
9. 1 Clement and the Didache
10. The Epistle of Barnabas and the Shepherd of Hermas
Conclusion
Indexes

"Bernier's study on the dating of early Christian literature is bold and disruptive in a field that has become complacent on such matters. Bernier's argument that the bulk of the literature that became the New Testament was written between 40 and 70 CE is notable and impressive, but even more impressive is his transparent style of arguing in such a way that those who agree and disagree will alike find this an invaluable resource. Bernier aims to replace and improve on Robinson, and he has."

Chris Keith, Centre for the Study of Judaism and Christianity in Antiquity, St. Mary's University; University of Notre Dame Australia

"As anyone who has studied New Testament chronology knows, the dates frequently presented to unsuspecting undergraduates as settled 'facts' are often anything but. In Rethinking the Dates of the New Testament, Jonathan Bernier presents a synthetic, comprehensive, and rigorously reasoned case for earlier composition. This book is a major contribution to the study of Christian origins. It not only needs to be read; it needs to be reckoned with."

"Jonathan Bernier has written the go-to book on dating the collection of texts now known as the New Testament (and some of the Apostolic Fathers). Bernier provides the first dedicated work on New Testament chronology for the twenty-first century, and it is a resource that I desperately wished for in my earlier years as a student. He combines critical analysis with balanced judgments and communicates technical issues and problems in an easy-to-read, jargon-free way. I found myself surprised, challenged, and better informed. Anyone interested in the emergence of Jesus-movement literature and history must consult this book."

"Chronology provides us with a window into the history of the earliest followers of Jesus and can help to establish an important piece of the contexts in which the books of the New Testament were written. In this rigorous yet accessible book, Jonathan Bernier presents a compelling case for relatively early dates for the New Testament texts. Rethinking the Dates of the New Testament provides readable, fair, and concise presentations of the central questions, passages, arguments, and debates pertaining to the chronology of the composition of each book of the New Testament. This makes it a fantastic introduction to a key scholarly issue. At the same time, Bernier's arguments are methodologically grounded and careful, resulting in evidence-based conclusions that are reasonable and responsible. The book is engaging and clear, making it a good resource for students, but it is also the sort of historically and logically rigorous work that will make it a must-read for anyone interested in historical approaches to the New Testament or early Christianity."

"In this carefully argued study, New Testament scholar Jonathan Bernier addresses the deceptively simple but exceedingly complex question of when the texts included in the New Testament--as well as 1 Clement, the Didache, the Epistle of Barnabas, and the Shepherd of Hermas--were written. Most scholars routinely accept what has become the majority view regarding these dates without themselves engaging the multiple problems that lurk below the surface. Here we find, for the first time in fifty years, a full monograph dedicated to offering the reader a synthetic treatment of the issues involved. Regardless of whether one accepts Bernier's conclusions, this book is the new must-read volume for anyone who wants to examine the dates of these ancient compositions."

"In Rethinking the Dates of the New Testament Jonathan Bernier offers a much-needed corrective to the tendency for dates assigned to New Testament works to drift further in opposite directions due more to ideological preferences than to evidence, or to be placed in the middle of a possible range as though that were the best way to respond to our uncertainty. With careful attention to the evidence for each work, Bernier makes a strong case for dates that are often earlier than the scholarly consensus. He takes seriously our inability to be certain and precise about dates, never shying away from providing a range that starts astonishingly early or continues well into the second century when the evidence supports it. At the same time he never allows the range of possibilities to hinder arguing for what is likely. Whether by gaining wide acceptance or by prompting well-argued responses, Bernier's book promises to shake up the scholarly study of the New Testament and some extracanonical Christian works. What Bernier has provided will undoubtedly serve as an impetus to refreshing scholarly conversations for decades to come."