by: Craig A. Carter 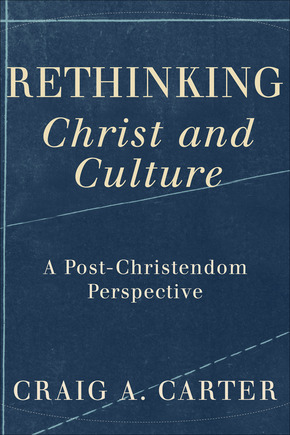 "If I could, I would stipulate that every seminary professor who assigns Niebuhr's Christ and Culture also require Craig Carter's new book to be read simultaneously. The book is that important."--Clint Schnekloth, Word & World

Few books have been used as broadly in Christian colleges and seminaries in the past half century as H. Richard Niebuhr's Christ and Culture. His five classic typologies of how Christ can relate to culture--Christ against culture, Christ in "paradox" with culture, and so on--have influenced two generations of Protestant and Catholic thinkers.

But in recent decades scholars have become aware that Niebuhr's typologies need to be rethought in light of changing circumstances. While Niebuhr wrote at a time when it was still possible to speak of Christendom, Christianity since that time has held less and less sway over American and European intellectuals and other shapers of culture. As such, Christianity has found itself increasingly marginalized.

In this work, Craig Carter follows in Niebuhr's footsteps, using typology to explore the crucial question of how Christians should relate to the world. However, he goes beyond Niebuhr to offer an alternative typology that is arguably more deployable in our post-Christian society. This book is a useful text for college and seminary courses and for any Christian who seeks to understand how to share a timeless message in changing times.

"H. Richard Niebuhr's days are numbered. Or so one can only imagine. This carefully argued and well-written book should bring the curtains down on the more than fifty-year reign of Niebuhr's typology in Christ and Culture. Carter not only shows how this paradigm is inadequate for our world but offers an alternative paradigm that is at once fuller and richer for understanding the church's social existence in the midst of a broken world that is loved by God."--Mark Thiessen Nation, author of John Howard Yoder: Mennonite Patience, Evangelical Witness, Catholic Convictions

"Craig Carter has written an important book for everyone under the influence of H. Richard Niebuhr's Christ and Culture, for everyone committed to the church's witness in the world, and for everyone concerned about the impact of Christianity upon our common life. In our tumultuous times, we should welcome his critique of Niebuhr, heed his call to faithful Christian witness, and emulate his care for our common life."--Jonathan R. Wilson, author of God So Loved the World

"This book is long overdue and much needed. Even though few works of contemporary theology are as influential as Niebuhr's Christ and Culture, there has been surprisingly little serious criticism of its main claims and organizing categories. Carter's stimulating book provides not only a provocative critique of Niebuhr's entire approach, it also breaks new ground by proposing an alternative understanding of the main options for the church's mission to the world. Anyone who reads Niebuhr's classic should also read this book. This book deserves the careful attention of pastors, theologians, and every student of Christian thought and ethics."--Jeffrey P. Greenman, Wheaton College

"Craig Carter invites us to rethink critically the assumptions, arguments, and conclusions of Niebuhr's Christ and Culture. With a well-developed sense of our postmodern, post-Christendom circumstances, and with fidelity to both scripture and the broad Christian tradition, he challenges the quasi-canonical status accorded to Niebuhr's typology by many since the book's publication in 1951, especially in the United States. This is most definitely an insightful and timely volume!"--Barry Harvey, Baylor University

"This exceedingly important and well-written book offers much more than a rethinking of Niebuhr's Christ and Culture. In his effort to determine what is wrong with Niebuhr's oft-cited typology, Carter digs deeply into two fundamental problems affecting not just Niebuhr but the majority of Western Christians--the church's embrace of Christendom and its unblinking support for state violence. Carter argues that once these presuppositions are stripped out of Christ and Culture, the weaknesses of Niebuhr's typology are revealed and a different approach both to the typologizing and living of Christ/culture relations becomes possible. The new typology that Carter develops is quite fascinating. But even more important is the bracing, accessible, and exceptionally lucid challenge he offers the church--to renounce both Christendom and the easy endorsement of violence, and thus return to the kingdom ethics of Jesus, Lord of the cosmos. This book is theologically careful, historically rich, and ethically thoughtful. It is intensely relevant to the cultural moment in which we live."--David P. Gushee, author of Only Human: Christian Reflections on the Journey Toward Wholeness

"[This book] may be one of the most important critiques done in the 50-plus years since [Niebuhr's Christ and Culture] became popular. You may know Carter from his earlier, helpful overview of John Howard Yoder's work (The Politics of the Cross) or his scholarly articles. He brings this radically Biblical, pacifist insight to bear in his reading of Christ and Culture."--Bryan Borger, heartsandmindsbooks.com

"Fifty years after its 1951 printing H. Richard Niebuhr's Christ and Culture appeared in a new edition, stimulating much discussion and re-evaluation. . . . Craig Carter's Rethinking Christ and Culture will endure as an important part of that re-evaluation. . . . He offers a rather persuasive critique of Christ and Culture. . . . Carter expresses his hope that pastors, theologians, students and all thoughtful Christians will find his book helpful. Undoubtedly they will. Whether they accept all the premises of his argument or not, they will find themselves moved by Carter's careful and beautiful writing. And they will have to respond to his compelling argument that, with the welcome demise of Christendom, we have the opportunity to discover what it means to follow Christ."--Ken Badley, Faith Today

"Carter offers a substitute for Niebuhr's typology, one he says is better suited to our own day in which Christendom is dying. . . . Carter offers a stimulating assessment of the issues, the best supplement we have to Niebuhr's classic."--Douglas A. Sweeney, Christianity Today

"[An] attentively lucid book. . . . Although J. H. Yoder and S. Hauerwas have been persuasively challenging Niebuhr for over thirty years, Carter advances the cause by delineating Niebuhr's text in a sustained and clear analysis, situating Niebuhr's ethics within the historical development of Christendom, and offering his own 'post-Christendom' paradigm based on the question of violence. . . . [T]his book proves a valuable entry-level resource for imagining the church-world relationship."--Jonathan Tran, Religious Studies Review

"Those earlier dismissed by Niebuhr will find solid and nuanced grounding in this critical appraisal of Niebuhr's typology."--Keith Graber Miller, Christian Century

"Carter engages in a close and careful reading of Niebuhr's book and then offers a critique of that argument. . . . His reading of the Church's unfaithfulness is provocative and important. . . . It remains to be seen if Carter's book will wield the kind of influence and have the longevity of Niebuhr's tour de force. Nonetheless, I find it to be important as a guide to breaking the spell of Niebuhr's work with its often-unstated assumptions and conclusions. Carter writes with some passion about the dangers of embracing Christendom and its attendant violence and his voice emerges clearly within his supple handling of a wide variety of sources. This book will serve well as a text for the study of theology, social ethics and so on, but is also important as a source for pastors and other Church leaders who continue to grapple with the question of how the Church can and should engage culture."--Paul Doerksen, Christian Week

"Carter's typology succeeds in discriminating three non-Christendom types that Niebuhr conflated into the 'Christ Against Culture' type. He also shows that the transformation of culture is developed with different meanings within both Christendom and non-Christendom types. Carter improves on Niebuhr, because his typology illuminates options in church history that Niebuhr treated inadequately or failed to identify."--Duane K. Friesen, Conrad Grebel Review

"If I could, I would stipulate that every seminary professor who assigns Niebuhr's Christ and Culture also require Craig Carter's new book to be read simultaneously. The book is that important. . . . Carter's commitment to the repudiation of coercive violence results in a substantially reconfigured 'Christ and culture' typology. . . . This newly mapped typology effectively widens and provides greater differentiation for Niebuhr's rather narrowly defined and caricatured 'Christ against culture' type. . . . Carter is most convincing in arguing that Niebuhr's book is long overdue for reassessment. Christ and Culture needs substantial critique, at least or especially because it has for so long been the received wisdom of the dominant culture. . . . It is deserving of Carter's critique precisely because it is not a neutral description of reality itself. I do find Carter persuasive."--Clint Schnekloth, Word & World

"Many of the colors in Carter's portrait are familiar from the paintings of others. . . . But the texture of his brush strokes and the composition of his subject are new and worthy of careful reflection. As we see Christianity being quarantined to the church parking lot, isolated from influence in public life and popular culture in the West, Carter's analysis provides an important opportunity to reflect on the church's unique calling and identity within culture."--Nelson D. Kloosterman, Mid-America Journal of Theology

"Important, prophetic, and frustrating. . . . Evangelical and other Christian readers who are weary of the Religious Right will appreciate much that Carter has to say. . . . This book is a must-read for anyone concerned about how the church should engage the non-Christian culture."--David W. Opderbeck, Perspectives on Science and Christian Faith

"Craig Carter has gone further than anyone in his critique in this splendid book. . . . Much of the strength of the book lies in its penetrating thorough analysis. The arguments are carefully expressed with fairness and learning, and offer us more than criticism. . . . The typology developed is richer than Niebuhr's and is offered with interesting examples. It will produce its own debate as it prompts many a reflection. Not the least, there are some creative biblical insights. This is high quality theological writing."--Brian Haymes, The Gospel and Our Culture

"In many ways, Carter makes a compelling case in this work. . . . Carter offers a sobering critique of a particular construal of Christendom and presents challenging non-Christendom alternatives."--Laura C. Miguélez, Christian Scholar's Review

"[A] stimulating work. . . . This book offers a full-scale critique of and alternative to H. Richard Niebuhr's classic work, Christ and Culture, which ahs been highly influential among both liberals and conservatives since its publication in 1951. . . . There will be much of interest here to readers."--Todd A. Wilson, Evangelical Missions Quarterly

"With great ability and an attractive style, Carter guides us through two steps in the two parts of his book: first 'Rethinking Christ and Culture after Christendom'. . . and then offering us 'A Post-Christendom Typology of Christ and Culture.'. . . The nine tables distributed throughout the text are quite helpful summaries of Carter's argument."--Samuel Escobar, Missiology

"[Carter's] book should convince anyone who still employs Niebuhr's typology to finally relinquish it. It is ideal for lay groups as well as introductory courses, where it might familiarize students with the context for doing theology today."--Coleman Fannin, Review and Expositor

"[A] helpful [book] on the relationship between the church and culture. . . . Strongly recommend[ed]."--Bert Waggoner, Cutting Edge

"Rethinking Christ and Culture makes a significant contribution to understanding Niebuhr and his applicability today. . . . If you are interested in understanding, teaching, or writing about Christian-culture interaction, by all means consult this important book."--J. Nelson Jennings, Mission Studies