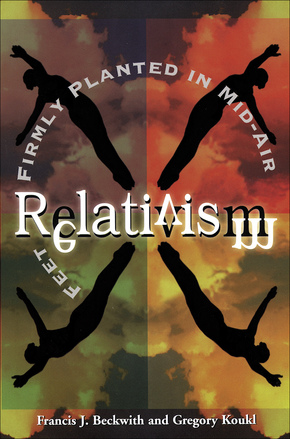 Many Christians are concerned about the tide of moral relativism that is rising steadily in our country. And rightly so: Relativism affects our education system, the legal system, and how people think about everyday issues. Yet little has been written on the topic outside academic circles.

This void is filled by Frank Beckwith and Greg Koukl, who analyze relativism and present strategies to defend the belief in moral absolutes. Using a commonsense approach, Koukl defines relativism, traces its growth over the past few decades, and critiques the logical inconsistencies to which its supporters are led. He then presents a case for moral objectivism. Beckwith, building on Koukl's foundation, evaluates the influence of relativism on issues including abortion, homosexuality, political correctness, multiculturalism, and tolerance. In each of these areas, he provides compelling arguments for thinking people.

Following in the tradition of C. S. Lewis and Francis Schaeffer, Relativism is an important guide for those who are concerned about intellectual issues that challenge the Christian faith.

"Brisk, logical, and thoroughly practical, this is simply the best and most accessible book on the subject for general readers. It's ideal for ordinary people trying to find sense under the assault of senselessness in private and public life. You can be sure I'll recommend it highly to my students."
--J. Budziszewski, The University of Texas at Austin

"A good book to help us see not only the absurdity of moral relativism, but also the disastrously dangerous application of it. I believe the authors have fulfilled their purpose not only to critique this 'unoffical creed' of our American culture, but to show us how we can challenge it, stand against it, and be equipped not to cave in to its ungodly philosophy and practice. . . . Preachers, teachers, parents, junior high and high school students should read this book. This would be a good book for those working with the teenagers of the millennial generation to use for study and discussion. . . . In the tradition of Francis Schaeffer and C. S. Lewis, this book will be a helpful tool in your case of resources to carry out your calling to 'serve God's purpose in this generation.' The authors are to be commended not only for their effort to explain moral relativism, but for their ideas and suggestions for students and adults to respond properly and accordingly."--Equip for Ministry (September/October 1999)

"In this entertaining and concise debunking of relativism, mssrs. Beckwith and Koukl unmask it for the intellectual farce it is. Throughout their book, they emphatically show that all relativism is necessarily self-refuting, that is, it contradicts itself. . . . An excellent apologetic tool for defending biblical morality. . . . The urgent prescription for our confused culture"--Southern California Christian Times (December 1998)

"An extremely well-researched, intellectual approach to the problem of relativism and its effect on education, public policy, and our everyday lives."--Youthworker (March/April 1999)

"With great skill, convincing analysis, and cultural relevance, the authors show how relativism is both dangerous and widespread in today's world."--Fresh Pages and Tapes (February/March 1999)

"As a wonderfully incisive critique of the prevalent forms of moral relativism, this book prepares Christians to thoughtfully engage the moral relativist in fruitful discussion, leading to the refutation of the relativist's position while replacing it with a well-founded and biblically consistent moral objectivism."--Christian Research Journal

"This easy-to-follow book will be a very useful companion for anyone seeking to expose the flabby reasoning of contemporary liberalism."--The National Educator (January 2000)

"A work in 'philosophical apologetics,' Relativism: Feet Firmly Planted in Mid-Air addresses the origin and nature of truth. It is of the same caliber as the writings of Os Guinness, Francis Schaeffer, and C. S. Lewis. Again, it is one of a few titles that solely focus on relativism; for this reason, it is unique."--Christian Library Journal (Winter 2000)