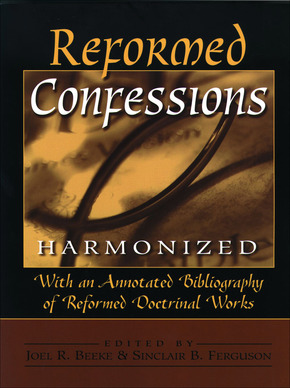 "A very useful collection, and, as far as I know, the only one of its kind. It should be welcomed by historians and theologians who are interested in the Reformed tradition."-- John Hesselink, Sixteenth Century Journal

Despite the acknowledged importance of confessional statements throughout church history, the most significant of these documents have never before been published in a single volume. Now Drs. Beeke and Ferguson have harmonized seven important Reformed confessions into a convenient parallel arrangement.

The seven confessions were produced by three different strands among the European churches. From the Dutch-German reformers came the Belgic Confession of Faith (1561), the Heidelberg Catechism (1563), and the Canons of Dort (1618-19). The Swiss churches contributed the Second Helvetic Confession (1566). And the Scottish-English tradition was set down in the Westminster Confession of Faith (1646-47) and the Larger and Shorter Westminster Catechisms (1647).

The unique feature of this volume is the editors' arrangement of the various confessions in parallel columns under the traditional subject headings of systematic theology. Readers can compare the formulations on particular points of doctrine, such as the trinity, justification, Christian liberty, and baptism. While elaborating the differences that existed between the various national churches, the comparisons also underscore the fundamental unity regarding the basic tenets of the faith.

This confessional harmony is further enhanced by the editors' historical introduction to the subject. They also provide an extensive annotated bibliography of Reformed theological writings that will serve as a useful guide for readers who desire to undertake further study. In all, this is an important resource for students and pastors interested in the historical foundations of the Reformed tradition.

"A helpful tool for ministers, scholars, church leaders, and all who love the Reformed faith."
--R. C. Sproul

"My first reaction to this book was 'Why hasn't someone thought of this before?' . . . All who value the Reformed theological heritage, particularly those who preach and teach, will quickly find this harmony an especially useful resource."--Presbyterian Layman (November/December 1999)

"Reformed Confessions provides us with an excellent tool for teaching doctrine. . . . Other books harmonize some of these creeds and confessions, but having all seven in quick reference columns will make our teaching and preaching easier, and hopefully encourage us to draw from the good content."--Equip for Ministry

"This volume is a welcome aid in providing light from old times."--J. Ligon Duncan III, Journal of Evangelical Theological Society

"This is a very useful collection, and, as far as I know, the only one of its kind. It meets a real need an should be welcomed not only by all those who use those confessions but by historians and theologians who are interested in the Reformed tradition."--I. John Hesselink, Sixteenth Century Journal

"The editors have compiled a real treasure for those who love reformed theology. . . . I heartily recommend this volume because of its layout, good print, and usefulness. It should be sought out by officers and laity as a resource book to keep close at hand."--The Presbyterian Witness

"Beeke and Ferguson have done students of theology and members of the church a considerable service by compiling this harmony of the confessions. . . . I cannot express too vigorously my appreciation for the preparation and publication of this volume."--Cornelis P. Venema, Mid-America Journal of Theology