A Tradition and Trajectory of Integrating Piety and Justice 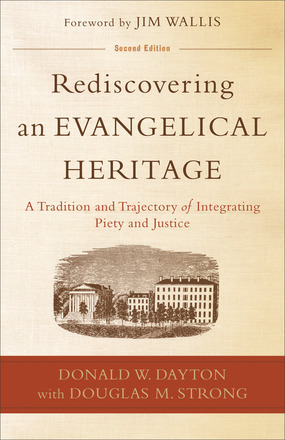 Contents
Foreword by Jim Wallis
A Note about Editions of This Book
Introduction to the Second Edition (2014): A Tradition of Integrated Faith by Douglas M. Strong
Prologue to the First Edition (1976): On Coming to Maturity in an Evangelical College in the 1960s by Donald W. Dayton
1. Jonathan Blanchard: The Radical Founder of Wheaton College
2. Reform in the Life and Thought of Evangelist Charles G. Finney
3. Theodore Weld: Evangelical Reformer
4. The Lane Rebellion and the Founding of Oberlin College
5. Civil Disobedience and the Oberlin-Wellington Rescue Case
6. Arthur and Lewis Tappan: The Businessman as Reformer
7. Orange Scott, Luther Lee, and the Wesleyan Methodists
8. The Evangelical Roots of Feminism
9. Anointed to Preach the Gospel to the Poor
10. Whatever Happened to Evangelicalism?
Epilogue to the First Edition (1976): Reflections on Some Unresolved Issues by Donald W. Dayton
Conclusion to the Second Edition (2014): A Trajectory of Integrated Faith by Douglas M. Strong
Index

"Four decades ago Donald Dayton challenged the grand narrative of the Christian Right with one of the first salvos in a vital battle of the culture wars: the fight to determine who counts as an authentic American evangelical. That battle continues today, and this new edition will compel believers and observers alike to appreciate the nuances and paradoxes of Christian identity and political action."

Molly Worthen, assistant professor of history, University of North Carolina at Chapel Hill; author of Apostles of Reason: The Crisis of Authority in American Evangelicalism

"Rediscovering an Evangelical Heritage is one of the most significant and important works on American evangelical history. Donald Dayton has valiantly upheld often-neglected stories within our tradition that desperately need to be heard. His work provides hope that God has moved through our history and we can look forward to participation in a broader coalition and larger move of God in the American evangelical church."

Soong-Chan Rah, Milton B. Engebretson Professor of Church Growth and Evangelism, North Park Theological Seminary; author of The Next Evangelicalism

"Since it was first published back in the 1970s, the counter-genealogy offered here has gone a long way towards demythologizing the widely peddled picture of evangelicalism as an inherently conservative phenomenon. Dayton's work shows the prophetic and progressive roots--and potential--of evangelical religion. As fresh and relevant today as when it was first published, this newly revised edition, bolstered by additional insights from Doug;as Strong, will introduce a new generation of readers to the revolutionary mothers and fathers of the evangelical movement, providing additional resources for those who wish to engage the burning issues of today with an eye toward justice and mercy. Dayton's work also raises serious questions about the politics of identity formation, highlighting the need to pay attention to the ways in which history can often be suppressed or distorted for present political agendas. A work that has already shaped many progressive evangelicals, I'm happy to see that this little book will be introduced to a new generation of readers. I heartily recommend it!"

"In writing Discovering an Evangelical Heritage, Dayton shows that many evangelical Christians in the nineteenth century didn't distinguish between a private faith focused exclusively on personal salvation and radical concern for the poor and oppressed. . . . In Rediscovering an Evangelical Heritage, an expansion of the original book, Don Dayton and Doug Strong show it is not heretical or 'communist' to talk about social justice in the church. On the contrary, a personal faith that issues itself in a fundamental commitment to social justice is the very stuff of orthodoxy and is deeply embedded in American history. . . . I would urge you to read this update of a classic book and ask how we can put our evangelical faith into action that makes its own history."

Jim Wallis (from the foreword)

"This book changed my conception of the nature and dynamics of evangelical social history at a formative stage in my life. My own scholarship has been seasoned by its outlook. I don't agree with all the details of Dayton's evangelical narrative. But for non-Calvinist, non-Republican, evangelical scholars like me, it continues to inspire a much more accurate, comprehensive kind of evangelical history than that which Dayton was taught nearly half a century ago."

"The Christian faith is personal but not private. At the heart of our faith is not only personal piety but also social justice. This book feeds the hunger to put the wholeness of our faith into practice."

"Discovering an Evangelical Heritage provoked an epiphany when I first read it twenty years ago. Its rich portrayal of a gospel-driven evangelical engagement with the social ills of nineteenth-century America proved that to be evangelical does not mean to abandon a concern for social justice--quite the contrary! May this newly revised and retitled edition convince a new generation of the same."