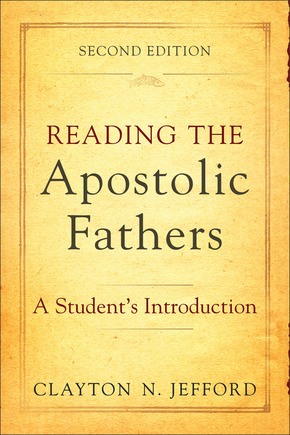 "Jefford has taken a complicated, diverse, and hotly debated collection of ancient Christian texts and made them intelligible for a modern, uninitiated audience. He condenses and construes the critical issues and literature in a manner that the beginning student will find advantageous, and the expert insightful."--D. Jeffrey Bingham, Dallas Theological Seminary
The Apostolic Fathers are critically important texts for studying the first century of Christian history. Here a leading expert on the Apostolic Fathers offers an accessible, up-to-date introduction and companion to these diverse and fascinating materials. This work is easy to use and affordable yet offers a thorough overview for students and others approaching these writings for the first time. It explains the context and significance of each document and points to further reading. This new edition of a well-received text has been updated throughout and includes a new chapter on the fragments of Papias.
Contents
Preface to the Second Edition
For the Reader
Introduction: What Are the Apostolic Fathers?
1. The Letter of Barnabas
2. The Teaching of the Twelve Apostles (The Didache)
3. The Letters of Ignatius
4. The Fragments of Papias
5. The Letter of Polycarp to the Philippians
6. The Martyrdom of Polycarp
7. The First Letter of Clement of Rome to the Corinthians (1 Clement)
8. The Second Letter of Clement of Rome to the Corinthians (2 Clement)
9. The Shepherd of Hermas
10. The Letter to Diognetus
Glossary
Index

"Clayton Jefford has a gift. Not once, but twice, he has taken a complicated, diverse, and hotly debated collection of ancient Christian texts and made them intelligible for a modern, uninitiated audience. But make no mistake. His revised and expanded handbook, a companion and tutor to have along as one reads the Apostolic Fathers, is not simplistic. Jefford condenses and construes the critical issues and literature in a manner that the beginning student will find advantageous, and the expert insightful. Every traveler needs a guide. For the Apostolic Fathers, your journey begins with Jefford."

"Reading the Apostolic Fathers provides a succinct but comprehensive introduction to Christian literature of the 'sub-apostolic' age. It provides the basic background information needed to read these texts intelligently and provides bibliographical aids for further study. The work will be of special interest to students beginning their study of the history of early Christianity."

"The layout of the printed page is as visually satisfying as the text is intellectually gratifying. . . . It is this kind of responsible summary and survey of a complex body of scholarship on a collection of ancient texts that will make interdisciplinary scholarship truly possible. . . . [The authors] have also produced the best kind of textbook, providing a student with a complete orientation and leaving to her the final task of reading the text."

"This book, intended as a quick and simple guide to the Apostolic Fathers, achieves its goals admirably. The consistency of the format, the clarity of the organization and writing, and the inclusion of numerous tables, maps, and a handy glossary ensure that anyone encountering these documents for the first time will find here a reliable and user-friendly introduction to an often strange and mysterious world."

"Set apart by the clarity of its prose and the cleverness of its design. Students will welcome both. . . . An excellent and a readable introduction. It is ideal for use in the classroom."

"Jefford's volume exhibits numerous strengths. He guides initiates into the fullness of relevant scholarship, including text-critical, historical, theological, liturgical, and socio-rhetorical studies. He masterfully surveys differing scholarly views concerning authorship, dating, provenance, audience, and occasion. His well-versed discussions summarize the major options in debated topics, interacting with the major arguments for each alternative view. The book contains valuable diagrams, tables, and maps. Another practical mechanism is the highlighting of important, new, or difficult words in boldface font. . . . Jefford's stated purpose was 'to be clear and concise, easy to read, intelligible, and suitable for review in short periods of time.' He has more than attained this admirable goal of composing a succinct primer. His book succeeds as both a student introduction and a reference tool. Through his expert and highly recommended survey, may the tribe of Apostolic Fathers readers increase."

"Jefford's first edition of Reading the Apostolic Fathers deserved the strong praise it received. Writing for a general audience, Jefford offered an approachable introduction to the writings of the Apostolic Fathers. . . . The revisions made to the text for the second edition do not change the overall approach or success of the original. Jefford's expertise, clear writing, and balanced approach to the various perspectives found in scholarship makes his revised edition valuable mainly to the intended audience, non-specialists. . . . The chief addition to the revised edition consists of an entirely new chapter on the fragments of Papias. . . . The revised edition also improves the text's layout. . . . Reading the Apostolic Fathers is an excellent introduction to this body of texts. It introduces the non-specialist to the necessary technical ideas related to the structure of the texts, the core theological themes, and important cultural contacts on which the authors of these writings depended."

"The second expanded edition of a highly commendable introduction by an acclaimed expert, with a new chapter on Papias and updated bibliographies."

"An accessible introduction to the writings of the Fathers . . . that will be enormously useful to pastors, seminary students, and general readers. . . . An appealing introduction to a fascinating body of literature that lies at the foundations of the Christian traditions."

"[A] useful book. . . . The book seems best suited as a companion to the reading of the apostolic fathers in an undergraduate course. . . . The insightful background will help students navigate through unfamiliar literature. The discussions of current scholarly opinion on issues of authorship and context disclose the complexities of early Christianity, while the summaries of key themes and images focus the reader's attention on each text's contributions to the thought and practice of the emerging church."

"Designed as a textbook to be used in conjunction with the primary texts, the treatments in this book are admirably clear, consistent, and user-friendly, even for someone with little background in Christian history or theology. . . . Jefford's book is a commendable text for undergraduate, seminary, and beginning graduate students. . . . This book might also serve, however, as a quick reference for scholars. . . . It is sufficiently straightforward to be of use to the interested pastor or layperson."

"This introduction to the apostolic fathers will be gratefully welcomed by those students who are fortunate enough to be exposed to these seminal writings, and by those instructors who are wise enough to see the immense value in these writings for captivating the imaginations of their readers, as well as illumining the early stages of the development of doctrine. The text is very competently written, both historically and pedagogically. It is marked by clarity and ease of reading. It is perfect for students who do not have much background in historical theology; they can turn to a substantial and accommodating glossary of important persons and theological terms at the end of the book. Also included are bibliographies for further reading, which extends the usefulness of the text for more advanced students. . . . Any remaining excuse to pass over the apostolic fathers in a course on early church history has now vanished."

"Students of early Christianity will find this volume a valuable primer on the apostolic fathers. . . . [Jefford] is thoroughly conversant not only with the ancient writings but also with modern critical discussion of them and reaches well-informed conclusions. . . . He has enhanced the usefulness of the volume by including numerous charts and two maps."

"A welcome addition to the field of early Christian studies. . . . Particularly useful are the diagrams, tables, and maps which help the reader place the author/document in his/its literary and historical context. . . . This study represents a useful introduction to the Apostolic Fathers which can be used as a beginning for a further, deeper study of the literature of the early church."

"This is an attractively produced paperback introducing beginners to the apostolic writings. . . . [A] serviceable introduction."