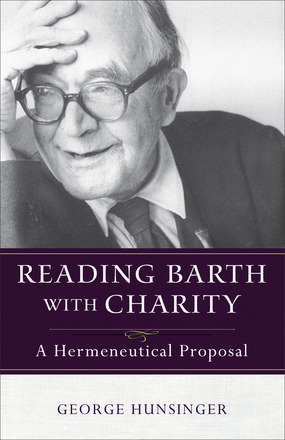 Karl Barth and his legacy have dominated theology circles for over a decade. In this volume George Hunsinger, a world-renowned expert on Barth's theology, makes an authoritative contribution to the debate concerning Barth's trinitarian theology and doctrine of election. Hunsinger challenges a popular form of Barth interpretation pertaining to the Trinity, demonstrating that there is no major break in Barth's thought between the earlier and the later Barth of the Church Dogmatics. Hunsinger also discusses important issues in trinitarian theology and Christology that extend beyond the contemporary Barth debates. This major statement will be valued by professors and students of systematic theology, scholars, and readers of Barth.

Contents
Introduction
1. Grace and Being: The Charter Document
2. Seek God Where He May Be Found: An Important Exchange
Interlude
3. Being in Action: The Question of God's Historicity
4. Two Disputed Points: The Obedience of the Son and Classical Theism
5. Revisionism Scaled Back: A Partial Dissent
Conclusion
Indexes

"George Hunsinger has mastered the rare art of combining passion with clarity, and polemics with charity. Reading Barth with Charity not only shows readers what Karl Barth did--and did not--have to say about the Trinity and election but also instructs them in the wider tradition of Christian reflection on God. I would not be surprised if it turned out to be a modern classic."

"George Hunsinger has been in the front ranks of the traditionalist reading of Karl Barth over against revisionist interpretations. In this masterful book, he gives us a spirited, rigorous, and comprehensive presentation of the traditionalist tenet that Barth considered God's antecedent trinitarian perfection to be the ground for the divine acts of creation and election. The brilliance of this account extends beyond internal Barthian debates and illumines crucial issues in contemporary Christology and trinitarian theology."

"With his usual sharp, logical precision, George Hunsinger offers a ringing challenge to the revisionist interpretation of Barth's theology. In so doing, he champions a reading of Barth that is more thoroughly trinitarian, evangelical, and (broadly speaking) catholic. A major contribution to Barth studies, and at the same time a rigorous, lucid introduction to Barth's theology for nonspecialists."

"Reading Barth with Charity offers a long-needed corrective to the revisionist readings of Barth. Professor Hunsinger's work is an authoritative and accessible guide to the disputed questions of Barth's theology, especially his doctrine of the Trinity and election and his account of divine action. Highly recommended!"

"This new Barth-book of George Hunsinger presents a careful and deliberate analysis of Barth's Church Dogmatics and stresses that for Barth, God is the one who loves in freedom. Hunsinger argues convincingly that God's relation to the world stands in correspondence to and is a repetition of God's Trinity."

Christiane Tietz, Institute of Hermeneutics and Philosophy of Religion, University of Zurich, Switzerland

"A lively disagreement exists between 'traditionalists' and 'revisionists' in Barth studies. For revisionists . . . the triune life does not constitute the eternal being of God but instead is consequent upon God's decision to save the world. In contrast, the traditionalist perspective, ably presented here by Hunsinger, is that the divine decision to choose Jesus Christ as the means of saving the world is grounded primordially in the triune life, whose forgiving generosity is the basis for God's decision to save. . . . Hunsinger is aware that passages in Barth's corpus could be interpreted through the revisionist lens. Hence, he appeals to 'charity.'. . . A charitable reading of a text implies that one attempts to resolve apparent contradictions in a thinker without resorting to the charge of inconsistency. . . . Traditional Lutherans have never thought of God in such voluntaristic terms as to reduce the triune life to God's decision to become incarnate. Instead, with Nicene faith, Lutherans have always believed in the eternal nature of the triune life."

"Reading Barth with Charity meets high expectations by helpfully introducing the traditionalist standpoint. Nowhere else in Hunsinger's writings can the reader find such a broad portrayal of the traditionalist concerns of Hunsinger and his allies in contrast to McCormack and the revisionists than in this book, especially in its conclusion. Despite any agreement or disagreement with Hunsinger's views one finds a distinct argument for the freedom of God and the necessity of prioritizing God's being in the immanent Trinity before the consideration of God's acts in the economic Trinity."

"Hunsinger is a premier interpreter of Karl Barth. His many books have examined Barth's theology in its breadth and depth. In Reading Barth with Charity, he takes a deep dive into an internal debate brewing in Barth studies in recent years. . . . This book is significant as a detailed theological debate as well as for Hunsinger's proposal that Barth be read according to 'the principle of charity.'. . . [A] wide-ranging and detailed critique of a revisionist reading of Barth. The level of engagement with Barth texts is high throughout this book. Barth specialists will follow the nuances and implications in this debate. They will continue to weigh in on which reading of Barth is more viable. For those who have less acquaintance with Barth, the arguments will be challenging. But persistence in reading here can lead to deep understandings of Barth. It can also reveal continuingly important issues in contemporary trinitarian theology and Christology."

"Hunsinger's book . . . challenges pastors and theologians to think more deeply about the character of the God whom we know decisively in Jesus Christ. . . . Hunsinger's book, like all his work, is brilliantly written and argued, but many pastors--and some theologians--will wonder whether they should make the effort to read it. Those who do will be rewarded with a clearer understanding of the 'traditionalist-revisionist' debate as well as the current state of Barth studies in the Anglo-American world. But Husinger's work will be of greatest value to the church if it helps pastors and theologians think again about how to speak about God to a world that, in the words of Wolf Krötke, a prominent German interpreter of Barth, has 'forgotten God.'. . . Hunsinger and the revisionists . . . remind us of the priority of theology and its role in shaping pastoral ministry. When that kind of debate takes place, the church has reason to be thankful."

"[A] carefully constructed and brilliantly argued book . . . . This book is a masterful exercise in systematic theology just because it is both critical and constructive in ways that demonstrate repeatedly why it is so vitally important to recognize and to respect the freedom of God's love in himself and for us. Hunsinger makes an enormous contribution to Barth scholarship. . . . This book is must reading not just for Barth scholars (though it certainly should be for them as well) but for anyone interested in understanding exactly why it has been imperative for Christians since Nicaea and before that to acknowledge the divine freedom of God's love for us as it is grounded in the eternal or immanent Trinity. . . . This book shows that it is extremely important to understand how not to read Barth so that, with him, we can better understand the truth of the Christian faith. As suggested on the book cover, it will be no surprise if this book turns out to be a 'modern classic.' In fact, I would be surprised if it didn't."

"Hunsinger, one of the foremost Barth scholars writing today, presents this book in order to address the recent revisionist interpretation of Karl Barth's theology. . . . This book . . . pleads for a charitable reading of Barth and serves to advance in a sustained way the traditional understanding of Barth's view of God's ontology. . . . I judge Hunsinger's book a success and side with him in judging the revisionist interpretation of Barth's thought to be mistaken. . . . I think that Hunsinger . . . [has] drawn the stronger and more persuasive case regarding Barth's theological ontology."