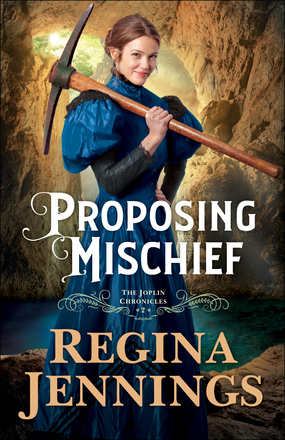 Only one person can give her the freedom she seeks--but is it worth the risk?

Maisie Kentworth is being forced to stay on her parents' ranch. After a short-lived relationship with the wrong man, she's worried about inflaming things further between her former beau and her protective family. Left to rue her mistakes, she keeps busy exploring the idle mine at the edge of their property, where she discovers a great treasure.

Boone Bragg is also stuck. With his parents on vacation, the management of Bragg Mining falls on him, and one of his advisors wants him as a son-in-law. One wrong move, and Boone will end up either offending an associate or marrying a woman he can't endure.

While closing up a spent mine, Boone gets two surprises. One is a spitfire farm girl who's trespassing with a pickax, and the other is the amazing crystal cavern that she's discovered. Suddenly Boone sees a way to overhaul the family business. With part of the cavern on Kentworth land, Boone makes Maisie a proposal that he hopes will solve all of their problems. Instead it throws Joplin into chaos, and it will take all of Maisie's gumption to set things right.