Toward a New Introduction to the Prophets 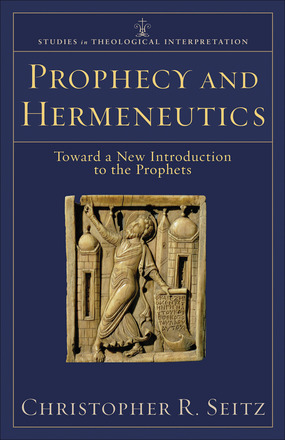 "Required reading for all future studies on the prophets. Seitz is to be commended for his yeoman service in this regard. . . . This book points the way forward to help us understand the prophets in their canonical form."--Stephen Dempster, Themelios  This volume by Christopher Seitz offers a contemporary look at the study of Isaiah and the twelve Minor Prophets. Seitz explores fundamental questions of hermeneutics, the canon, and the Prophets as a bridge between the Testaments.

In the first section, "The Overreach of History--Figuring the Prophets Out," Seitz delivers an insightful account of the history of the genre, looking at the impact of modern critical methods and the influence of Gerhard von Rad. In particular, Seitz is concerned about unintended consequences of the tradition-historical approach, especially the separation of the Prophets from their canonical context. As an alternative, he makes the case for a "figural" reading that takes seriously the Prophets' association with other portions of the canon while maintaining their individual integrity.

The second section, "Time in Association--Reading the Twelve," offers three exegetical essays in which Seitz explores the themes and hermeneutical approach developed in the first half of the volume.

This work, the second in the Studies in Theological Interpretation series, introduces an original and fruitful approach to the study of the Prophets, one that takes seriously the questions of both exegesis and hermeneutics.

About the series: The Studies in Theological Interpretation series is dedicated to the pursuit of constructive theological interpretation of the church's inheritance of prophets and apostles in a manner that is open to reconnection with the long history of theological reading in the church. These brief, focused, and closely argued studies evaluate the hermeneutical, historical, and theological dimensions of scriptural reading and interpretation for our times.

"Chris Seitz is one of the most insightful and creative biblical theologians working in the field today. In this book he shows us how traditional historical-critical readings have brought us to an impasse and then marks out a bold new path with his own proposal to take the canonical form of prophetic literature seriously. No one will look at the prophetic corpus in the same way after being tutored by Seitz."--Gary Anderson, professor of Old Testament/Hebrew Bible, University of Notre Dame

"It is rare when reviewing a book to recognize that a profound paradigm shift is being proposed that deeply affects how the Old Testament prophets are to be understood. Building on over two decades of probing, critical exegesis, Christopher Seitz now offers a magisterial overview of the entire field and outlines a new and brilliant hermeneutical synthesis of biblical prophecy that restores the centrality of the canonical Scriptures to the church."--Brevard S. Childs, Sterling Professor of Divinity, emeritus, Yale University Divinity School

"Building on the long history of prophetic introduction and interpretation, Seitz offers a new way of viewing the prophets. He takes the realities of time and history with utmost seriousness but also attends to the hermeneutical implications of the present form of the prophetic books. The future of theological interpretation of Scripture depends on such breakthroughs as Seitz offers in these pages. We will have to read the prophets differently henceforth."--Patrick D. Miller, Charles T. Haley Professor of Old Testament Theology emeritus, Princeton Theological Seminary

"Seitz has offered a fresh and bold proposal for understanding the formation and theological significance of prophetic literature. In rich dialogue with Gerhard von Rad and building on recent scholarly research devoted to the Book of the Twelve, Seitz discerns a process of 'figural integration' in prophetic literature. Prophetic words were, in his judgment, fulfilled, not in some simplistic fashion, but over the course of time and, ultimately, in the New Testament. All those interested in prophetic literature and the character of Scripture will find this volume both challenging and useful."--David L. Petersen, professor of Old Testament, Emory University

"This is a highly interesting book. Christopher Seitz has long followed in the footsteps of Gerhard von Rad. Now he is taking a further step: beyond tradition-history toward the final, canonical form of the biblical text. He deals with the problems involved and demonstrates this new approach utilizing the prophetic literature, in particular the Book of the Twelve. He shows in detail how historical questions about the different books within the Twelve are useful and even necessary but that they must finally move into an understanding of the text in its final form. Therefore he calls his approach 'canonical-historical.' It can be expected that this book will cause a vivid methodological discussion."--Rolf Rendtorff, emeritus professor of Old Testament, Heidelberg University

"A stimulating . . . book dealing primarily with the Minor Prophets."--Preaching

"Prophecy and Hermeneutics illustrates scholarship that is grappling with the logic behind the final form of the materials. . . . This book provides an insightful analysis of the methodological and historical assumptions that propel current research in the Prophets. Its bold proposal promises a fresh and exciting change of direction. . . . For those of us who have greatly benefited from this and other works produced by Seitz, it is hoped that . . . he will undertake his own comprehensive introduction to the Prophets in accordance with the promising proposal offered here."--Amber Warhurst, Journal of the Evangelical Theological Society

"Seitz has produced an important and welcome work that examines the questions posed for Christian biblical theology by the ongoing discussion of the interpretation of the final forms of the prophetic books. The open questions emerge as an invitation to reflect further on the issues that his work raises."--Marvin A. Sweeney, Toronto Journal of Theology

"Christopher Seitz has been a leading voice for some time now among adherents of canonical and theological approaches to interpretation of the Prophets, particularly through his work in Isaiah. . . . Seitz has made an important contribution not only to the study of the Prophets but also to research into the Hebrew Bible as a whole. Here Seitz has demonstrated that the final form of the text is a legitimate historical object of study. Introductions to the Prophets can no longer be content with historical reconstructions. An account has to be given for the network of relations that exists within the texts as they stand. . . . Those who have felt a void in the older introductions to the Prophets will certainly find this present volume to be of great value."--Michael B. Shepherd, Review of Biblical Literature

"Seitz' work should be received with appreciation by any who understand the relationship between OT and NT as prophecy and fulfillment rather than a parade example of a religio-historical development."--Richard D. Israel, Pneuma

"[Seitz] offers a compelling prophetic hermeneutic. Those seeking to interpret Israel's prophets in light of their canonical context and New Testament fulfillment will have much to learn from this book."--Reed Lessing, Concordia Journal

"This book is an ambitious attempt to understand anew the prophetic witness of the OT by taking seriously its canonical presentation, which also has relevance for history. . . . Seitz is at his best when pointing out the literary connections between books and then trying to understand their theological significance. . . . His comments are rich with profound insight. . . . The strengths of this book are obvious: the witness of the canon itself and not a historically uncertain reconstruction, the literary associations and thematic unity that result, the hermeneutical significance of the canonical arrangement, and the exegetical insight that Seitz provides. This is a book that will be required reading for all future studies on the prophets. Seitz is to be commended for his yeoman service in this regard. . . . This book points the way forward to help us understand the prophets in their canonical form."--Stephen Dempster, Themelios

"Chris Seitz is a familiar name in biblical studies, especially within the prophetic and Isaianic areas of research. His current volume fits well within his area of expertise, as will be readily apparent in his interaction with past and present perspectives on prophetic interpretation. . . . Seitz's interaction with scholars is superb. Throughout the book he presents past and present perspectives in prophetic study with an eye to show inadequacies, though never glossing over their positive addition to biblical studies. He can certainly not be accused of throwing the baby out with the bathwater. . . . With extensive review of interpretative and methodological frameworks as well as a theoretical aim, this work seems best suited for the academic institution. Professors and graduate students especially will benefit from this stimulating work."--J. Blair Wilgus, Stone-Campbell Journal

"By attending to the formation of the prophetic witness within a canonical process, Seitz enables us to understand prophecy and fulfillment in a manner that appreciates the working of God's (Trinitarian) providence in and through the linear unfolding of history. . . . Seitz's book is a major contribution to our understanding of what it means to do fully historical research from a critical, and Christian, perspective. . . . Recognizing that the account we give of history is inevitably a theological account, Seitz inaugurates a deeper exploration of the prophetic canon as witness to God's activity in history and in the Church."--Matthew Levering, The Thomist

"I would highly recommend this book for graduate-level and advanced undergraduate-level theological students. Seitz's work makes an important contribution to the field of hermeneutics in that he demonstrates some major deficiencies of the historical critical method and provides a promising, more integrated, approach to interpreting the prophetic books of the OT."--Michael D. Matlock, Bulletin for Biblical Research

"I greatly appreciated Seitz's reimagining of prophetic study, particularly in approaching the minor prophets as a single book. Seitz rightly notes that the individuality of each piece should not be lost, but in highlighting the canonical placement of each, he demonstrates a greater interconnectedness between the texts, unifying the overall message of the OT prophets. . . . This perspective is helpful for a theological student who has thus far been trained to zoom in on the historical context of the author and the original recipients of the text. . . . In Seitz's estimation, reading the twelve with an eye to their canonical placement has both theological and practical applications. . . . To view these prophetic texts in such a manner makes their message more applicable to our contemporary contexts while still honoring their original intent. This is supremely beneficial as we think towards incorporating the whole of Scripture into our ministries."--Kelsey Holloway, Covenant Quarterly

"Perhaps the most notable intellectual heir of [Brevard] Childs working today is Christopher Seitz. . . . Seitz takes the Minor Prophets in canonical order and treats them, per rabbinic tradition, as a single work. . . . The overall result . . . is probing, nuanced, and allusive. . . . There is much profitable reading in [this volume]."--Daniel Muth, Living Church