Cycle Three of the Harbingers Series 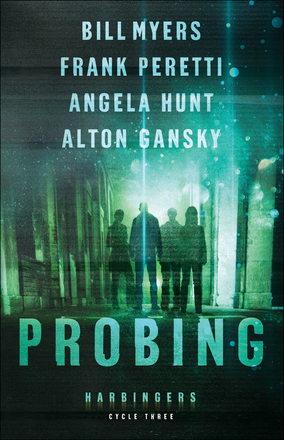 As Evil Lurks Around Every Corner, This Misfit Team Must Work Together If Anyone Wants to Make It Out Alive. This is Harbingers.

The stakes are higher than ever as Bill Myers, Frank Peretti, Angela Hunt, and Alton Gansky return again to the universe of Harbingers for four more stories set in a world on the brink of destruction.

In Bill Myers's "Leviathan," the team heads to Hollywood for a taping of a new television pilot, Live or Die: The Ultimate Reality. When violence and chaos erupt, they must fight an insidious and multiplying madness before it spreads across the globe.

Frank Peretti's "The Mind Pirates" centers on an earring with mysterious powers that just might hold the key to solving a murder. When two members of the team are kidnapped by seventeenth-century pirates, the team must overcome the ruthless scheming of an evil, hidden nemesis.

In "Hybrids" from Angela Hunt, the arrival of two mysterious black-eyed children and a baby's disappearance are no coincidence. Instead of finding the rest they need, the four friends must stay on their guard as they search for answers--and for a missing child.

In "The Village" from Alton Gansky, a visit to a guarded and secretive North Carolina town becomes the most challenging mystery the team has ever faced as they must jump between universes to solve a problem they barely understand before the window between worlds closes forever.

"Probing takes fans on a wild ride through the supernatural and science fiction. Each story draws readers in and gives a new perspective, creating a well-rounded series of events that fans will love. The characters are unique, each of them having their own quirks that endear them to each other and to readers, and the banter is lively. From high-tech mind reading to the walking dead, Probing is like The X-Files of Christian fiction."