Prize of My Heart 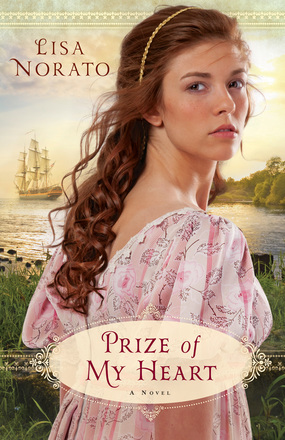 Rich in Historical Detail, This Is a Romance that Delivers!

An unsolved mystery separates ex-privateersman Captain Brogan Talvis from his lost son--his only living relation, his only family. Shortly before her tragic demise, his wife abandoned their infant to strangers, refusing to reveal the child's whereabouts. Now, three years later, Brogan has discovered the boy at the home of a shipbuilder's daughter, Lorena Huntley.

Lorena guards a dark secret about her young charge. She finds herself falling for the heroic captain who has come to claim his newly built ship, unaware his motive for wooing her is to befriend the boy he plans on reclaiming as his own--until the day another's evil deceit leaves her helplessly shipbound, heading toward England.

As the perfect opportunity to reclaim his son unfolds, Brogan is haunted by thoughts of Lorena in her dire circumstance, and he is forced to make a heartrending choice between his child and the woman who has begun to capture his heart. But only his unselfish sacrifice can win him the greatest prize of all--love.

"This book is set in Duxboro, MA, in 1815. The protagonist Captain Brogan Talvis, is preparing to christen his newly purchased 880-ton merchantman, The Yankee Heart. Brogan, an orphan, was rescued at age 6 from the gutters of Boston Harbor by Mr. Jabez Brogan aboard ship, taught him to read using the Bible and helped him become a successful Captain now able to buy his own ship. But Brogan has a hidden agenda involving his long lost son Drew. Wealthy shipbuilders, the Huntley's have taken in Drew and raised him as their own for several years with beautiful daughter Lorena being the surrogate mother. Meanwhile George Louder, an architect with the Huntley firm, has designs on beautiful Lorena. Jealousy, conspiracy and secrets enter into the mix, and the reader is led from page to page working through this exciting tale which takes place over two years in Boston and on the high seas. Rating: 4"
--RE, Libraries Alive, Summer 2012