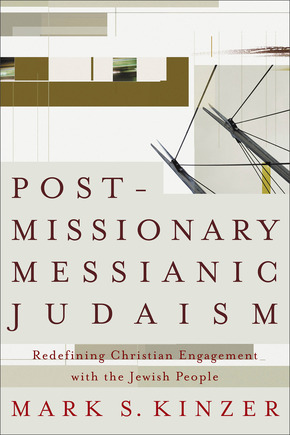 "Groundbreaking and significant. . . . There is much of value in the book, and it should be required reading for all who have an interest in Jewish evangelism and Jewish believers in Jesus. . . . [Kinzer] has done the Messianic and missionary movements, and those concerned with Jesus and his people, a service."--Richard Harvey, Mishkan

In recent years, a new form of Messianic Judaism has emerged that has the potential to serve as a bridge between Jews and Christians. Giving voice to this movement, Mark Kinzer makes a case for nonsupersessionist Christianity. He argues that the election of Israel is irrevocable, that Messianic Jews should honor the covenantal obligations of Israel, and that rabbinic Judaism should be viewed as a movement employed by God to preserve the distinctive calling of the Jewish people.

Though this book will be of interest to Jewish readers, it is written primarily for Christians who recognize the need for a constructive relationship to the Jewish people that neither denies the role of Jesus the Messiah nor diminishes the importance of God's covenant with the Jews.

"This important book is a breakthrough study for all who care about Jewish-Christian relationships. Mark Kinzer makes a convincing case for seeing those relationships in a state of schism that desperately needs to be healed. He also offers refreshing clarity for those of us who have not been able to decide until now how to approach the supersessionist issue."--Richard J. Mouw, Fuller Theological Seminary

"Mark Kinzer has written an important book. He is surely correct that God intends the church to be a church of Jews and Gentiles, that there are in fact many Jews who believe that Jesus is Messiah, and that within the predominantly Gentile church they are unlikely to continue as observant Jews. Congregations of 'Messianic' Jews would seem to be an obvious solution, and such synagogues are up, running, and connected. All of which poses an enormous ecumenical question: What form is communion between these congregations and those who now think of themselves as 'the churches' to take?"--Robert W. Jenson, Center of Theological Inquiry

"Mark Kinzer's sophisticated discussion is engaging for a Jewish reader 'listening in on the conversation,' even if written first to challenge Christians to reconsider the foundational Jewishness of their own identity. I learned much about the movement's origins and the effort to reconceptualize its identity in Jewish ways. The exegetical discussions are well made, explaining the New Testament mandate to which Kinzer appeals. In the twenty-first century, can a movement born out of Christianity become a kind of Judaism? And I wonder, is what Kinzer endorses here really postmissionary? Mark Kinzer's bold rethinking of his particular Messianic Judaism's agenda certainly suggests the possibility, if not yet the reality."--Mark D. Nanos, author of The Mystery of Romans and The Irony of Galatians

"Mark Kinzer gives us this powerful book in the fullness of time. It probably could not have been written before now, nor can we do without it any longer. The church needs this book to know how to be the church of the God of Israel. Messianic Judaism needs this book to know how to be a Judaism. And Christians and Jews can no longer 'dialogue' as if Messianic Judaism did not exist. In a brilliant, thorough, and compelling way Kinzer boldly interrupts the conversation of contemporary theology with the voice of Messianic Judaism. We are left with no option but to engage it. There is no turning back."--Douglas Harink, author of Paul among the Postliberals

"A fascinating book. . . . A merit of Kinzer's book is that it provides an enlightening history, enlivened by personal stories, of the ways in which Jews who believe in Christ have attempted to articulate their continuing to be Jews."--Richard John Neuhaus, First Things

"[Kinzer's] provocative study of Scripture and history are important for anyone hoping to bridge the gap between Jews and believing Gentiles."--Outreach

"Kinzer's strong stands on supersessionism and antinomianism are worth serious consideration by Jewish and Gentile believers alike."--Mark A. Kellner, Christianity Today

"[This book] is one of the more sophisticated and ambitious theological treatments to come out of the Messianic movement, as well as being well-focused and clearly written, and takes the discussion beyond the usual concerns. In some regards it offers some excellent and much-needed treatments of the Jewishness of the gospel, all the while pushing some very necessary and often neglected questions to the front burner of the theological agenda. . . . Postmissionary Messianic Judaism is required reading for leaders in the Messianic movement."--Rich Robinson, Mishkan

"A groundbreaking and significant book. While it will be condemned as heretical in some circles, others will welcome it as an important and programmatic statement for the future direction of the Messianic movement. As a Messianic Jewish theologian, Mark Kinzer now joins the ranks of David Stern, Daniel Juster, and earlier Hebrew Christians such as Jacob Jocz, Joesph Rabinowitz, and Paul Levertoff. Each in their time helped to shape the aims and aspirations of Jewish believers in Jesus, articulating their views in the context of Church and Synagogue. Like them, he will be seen as both seminal and controversial. It will only be in the light of further discussion, reflection, and practical implementation that his contribution will be fully assessed. . . . The book raises many important issues about the assumptions, method, sources, and content of a theology of Messianic Judaism, and to take it seriously the reader must engage with the book at several levels, and with a finely sharpened pencil. There is much of value in the book, and it should be required reading for all who have an interest in Jewish evangelism and Jewish believers in Jesus. . . . [Kinzer] has done the Messianic and missionary movements, and those concerned with Jesus and his people, a service, by identifying key questions and showing one way in which they might be addressed."--Richard Harvey, Mishkan

"Whereas the pre-Holocaust era witnessed by Hebrew-Christian scholars of notable erudition, much recent writing by Messianic Jews has lacked the quality and deserved respect that merits serious engagement and peer review by the academic community. . . . Kinzer's book is an example of such a voice that demands engagement from scholars who labor in the arena of interfaith dialogue between Christianity and Judaism. . . . Kinzer's well-written book demonstrates a mature theological reflection on the issues under discussion. . . . Kinzer's general premise--that any interpretation of Scripture that would require a Jewish believer in Yeshua to abandon his or her faithfulness to God's covenant with the Jewish people must be a wrong interpretation--has much to commend it, as does his application of that principle to the Biblical texts he examines. . . . Whether one agrees with Kinzer's views or not, he has surely challenged the Messianic Jewish movement to give serous consideration to the issues he raises, and he makes a reasoned plea to the church to reflect upon her theology in light of its tragic historical consequences for the Jewish people."--Akiva Cohen, Mishkan

"To be sure, Dr. Kinzer's book contains interpretation and theological directions that many will reject. I am not advocating the soteriological implications that show through in this work. . . . Nor do I advocate ceasing the proclamation of Jesus to Jewish people. What many readers may miss is that Dr. Kinzer does not advocate such cessation either. It is rather the method and content of that proclamation throughout history that he opposes. He believes the Jewish people very much need Jesus. It is really, however, the core of the book that I am advocating. The historical stance of churches against Jewish fidelity to the Torah deserves to be challenged biblically and theologically."--Derek Leman, Mishkan

"Kinzer has provided us with a fascinating, engaging and well written book with many attractive insights. . . . Kinzer's clarion calls--for the church to rid itself of still-remaining residues of anti-Semitism and for Jewish Christians to maintain and be allowed to maintain their national identity--ought to be widely heeded. I commend this book as an important contribution to the ongoing discussion on the relationship between Jesus, God the Son, Messiah of Israel and of all mankind, and the covenant people of God."--Baruch Maoz, Mishkan

"Mark Kinzer . . . has written a good and important book, and a provocative one as well. . . . No one who finishes the book will doubt that Kinzer's proposal raises issues of lasting importance not only about the significance of Messianic Judaism, but about the nature of the church's identity and its relation to the Jewish people. . . . Kinzer makes his case with care and thoughtfulness. In my opinion, Kinzer convincingly shows that a conception of the church as bilateral communion of Gentile disciples and observant Jewish believers is directly supported by significant New Testament passages and is broadly consistent with most of the rest of the New Testament. . . . Kinzer's proposal is an important one that deserves to be taken seriously by everyone concerned with thinking about the nature of a 'postsupersessionist' ecclesiology."--R. Kendall Soulen, Pro Ecclesia

"The author is to be commended for a careful analysis of New Testament texts in which he argues for plausible conclusions rather than proofs. His footnotes indicate a reliance on contemporary, reliable authors. . . . Kinzer has given us a bold, clear step for overcoming a first century division that need not have occurred."--Richard L. Schebera, Dialogue & Alliance

"Postmissionary Messianic Judaism provides a compelling perspective for healing the age-old Jewish-Christian schism. . . . Mark Kinzer's bold and brilliant book is primarily about ecclesiology, a post-Supersessionist 'Biblical Ecclesiology in Solidarity with Israel.' The book is well-written and tightly argued. . . . We owe Mark Kinzer a debt of gratitude for placing the issues in the centre of the table with such clarity, candour, grace, and hope."--Elmer M. Colyer, Scottish Journal of Theology