Paul, His Letters, and Acts 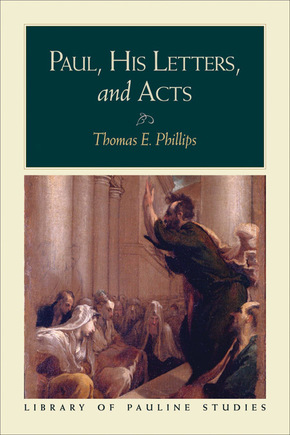 "This lively book revisits an old bone of contention in Pauline studies--relating the Paul of the letters to the Paul of Acts. Phillips is to be commended for bringing this critical set of questions within Pauline studies back into the foreground, and for engaging it with such sustained, disciplined, and frequently insightful enthusiasm."--Douglas A. Campbell, Duke Divinity School

Aside from Jesus, the Apostle Paul had the greatest formative influence on the early Christian movement. Yet who was this passionate missionary who carried the message of Christ throughout the Mediterranean world? The New Testament writings give us not one but two portraits of Paul. We read numerous details of Paul's life and relationships in the Book of Acts and we also find an additional set of details about Paul's activities in his letters. Yet how consistent are these two portraits? And which one gives us the most accurate picture of the historical Paul? In this volume Thomas E. Phillips examines the portrayals of Paul in recent biblical scholarship in the light of these two major NT portraits. Believing the apostolic conference at Jerusalem to be a watershed event, Phillips draws conclusions that help contemporary readers get a more accurate picture of Paul.

"Here is a helpful, detailed compilation of all the historical data that can be gleaned from Paul's letters and from Acts in the attempt to determine whether the emerging pictures of Paul and his mission are compatible or otherwise. The author concludes that the pictures are somewhat divergent with Acts presenting a later, more attractive Paul, but he presents the evidence with such care and impartiality that readers are free to make their own decision on this complex issue."--I. Howard Marshall, emeritus professor of New Testament exegesis, University of Aberdeen

"In this carefully written and accessible book, Thomas E. Phillips shows that portraits of Paul vary widely according to how they see the relationship between Paul's own letters and claims about Paul made in the Book of Acts. Some scholars discount what Acts says, while others use Acts to correct Paul's statements. Phillips argues that, while Acts develops its own perspective on Paul, it also provides crucial information."--Bruce Chilton, Bernard Iddings Bell Professor of Religion, Bard College

"In this lively book Phillips revisits an old bone of contention in Pauline studies--relating the Paul of the letters to the Paul of Acts. Eschewing oversimplified and preordained responses, he carefully tabulates data sets from both sources, working through comparisons of Paul's travels, broad cultural background, and relationships with other early church leaders and members to reach a final balanced and judicious weighting of the two sets of sources. The result is the crafting of a careful methodological and biographical trajectory that proponents of both sides of this frequently polarized debate will be able to trace through to arrive at a more reasoned and reasonable position. The main text is clear, with numerous jaunty analogies and metaphors; students in particular will benefit from its narratives, while scholars will profit further from the extensive annotations that Phillips supplies. Overall, Phillips is to be commended for bringing this critical set of questions within Pauline studies back into the foreground, and for engaging it with such sustained, disciplined, and frequently insightful enthusiasm."--Douglas A. Campbell, associate professor of New Testament, Duke Divinity School

"The quest for the 'real' Paul, pursued with renewed vigor in recent scholarship, has been beset too often by skewed sifting of evidence and wishful thinking. Not surprisingly, then, we find the Paul we want to find. Tom Phillips admirably resists this tendency with his meticulous and comprehensive discussion of the relevant 'data sets' of information regarding Paul in both the undisputed letters and the book of Acts. His disciplined, comparative approach carefully lays out the material for readers to make their own informed judgments. Along the way, Phillips sprinkles in his own judicious conclusions with a light but sure touch. Thoroughly abreast of contemporary scholarship and rigorously rooted in the biblical text, this is a most welcome and worthy reassessment of Pauline biography."--F. Scott Spencer, professor of New Testament and preaching, Baptist Theological Seminary

"This book is particularly helpful . . . in showing many of the main issues on which debate over the compatibility of Acts and the Pauline letters focuses."--Ben Dunson, Theological Book Review

"Phillips has shown how a careful methodology can provide clearer data (e.g., the different images of Paul's social status). This book . . . can serve as a good introduction to some issues that surround the relationship between the image of Paul in Acts and the historical Paul."--Jerry L. Sumney, Catholic Biblical Quarterly

"Well written and accessible. It will be of high value to advanced undergraduates, seminarians, pastors, and new scholars on Paul."--Robert Paul Seesengood, Religious Studies Review

"Paul, His Letters, and Acts will prove to be a helpful book in several ways. Perhaps more importantly, it provides newcomers with a concise introduction to a lengthy and highly complex historical discussion, and it does so with greater emphasis on the primary evidence than on the secondary literature. Students who are looking to understand the current state of discussion will find enough clarity in Phillips's book that they will be able to enter more easily into academic discussions. For scholars who are already acquainted with the critical issues surrounding Paul's life, Paul, His Letters, and Acts provides an opportunity to reconsider established opinions. . . . It is helpful when a scholar comes along and reconsiders the primary evidence at some length without constantly framing that evidence as support for a specific argument. . . . Phillips has produced a remarkably unbiased overview of a very important topic in biblical studies, and his work is to be commended and recommended on that account."--Christopher D. Land, Journal of Greco-Roman Christianity and Judaism

"[A] significant contribution to the Library of Pauline Studies. . . . This book demonstrates extensive research. Phillips has interacted with a broad variety of Pauline scholars, and he brings up important issues and questions that every serious scholar of Paul must take into consideration. . . . The book makes several contributions to the present debate. Of particular value is its comprehensive survey of some key primary and secondary materials. The book provides a timely service for contemporary Lukan scholarship as well, as it successfully fulfills its goal of reframing important questions and provides a basis for further discussions. Scholars engaged in the study of the Lukan works must pay attention to the questions raised by this volume. Students of the New Testament will find this book useful for laying out the main questions regarding the life of the Apostle Paul and the problems in bringing together the data from Paul's epistles and testimony of the book of Acts."--Panayotis Coutsoumpos, Journal of Greco-Roman Christianity and Judaism