Paul as a Problem in History and Culture

The Apostle and His Critics through the Centuries 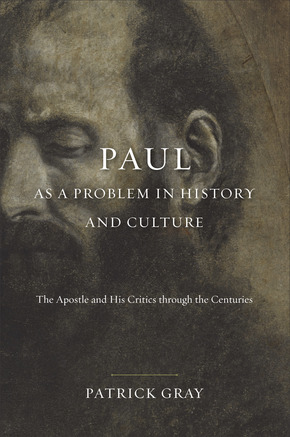 As one of the most significant figures in the history of Western civilization, the apostle Paul has influenced and inspired countless individuals and institutions. But for some, he holds a controversial place in Christianity. This engaging book explores why many people have been wary of Paul and what their criticisms reveal about the church and the broader culture. Patrick Gray brings intellectual and cultural history into conversation with study of the New Testament, providing a balanced account and assessment of widespread antipathy to Paul and exploring what the controversy tells us about ourselves.

Introduction: A Thorn in the Flesh
Part 1: Anti-Paulinism through the Centuries
1. The First Hundred Years: The Problem of Paul in the New Testament
2. The Premodern Era: The Early Church, Late Antiquity, and the Middle Ages
3. The Enlightenment and Beyond: Jesus, Paul, and the Rise of Modern Biblical Scholarship
4. The Nineteenth Century: Paul's Cultured Despisers
5. Yesterday and Today: Jesus versus Paul in the Public Square
Part 2: Anti-Pauline Contexts, Subtexts, and Pretexts
6. In the Tents of Shem: Paul among Jews and Muslims
7. Jesus versus Paul: Spiritual but Not Religious?
8. A World without Paul? Christian History in Counterfactual Perspective
9. Not by Paul Alone: Other "Founders" of Christianity
10. From Jesus to Paul: An Experiment in Comparative Religion
Conclusion: What We Talk about When We Talk about Paul
Indexes

"Many scholars write only for other scholars, and some experts are adept at writing for more general audiences, but only a few can write well with both audiences in mind. Patrick Gray is one of those rare scholars, and his book on reactions to Paul through the centuries is a gem that merits the attention of all readers interested in early Christianity's most controversial apostle."

"With much erudition, eloquence, and wit, Patrick Gray sets forth a fascinating two-thousand-year history of anti-Paulinism. Citing both scholarly and popular sources, he exposes the various (and at times bewildering) attitudes, assumptions, and motivations that lie behind the virile dislike of the apostle to the gentiles. This book will challenge both friends and foes of Paul to reflect critically on the relationship between Paul and the one he proclaimed as Messiah and Lord."

"Every Paul scholar knows that Paul has always been controversial, but I wager that few know the breadth and depth of the animus toward him surveyed by Patrick Gray. Not everyone will agree with Gray's perspectives on all issues, but everyone will benefit from his thorough research and astute insights. I will not be able to resist using this volume in upcoming Paul seminars. It is sure to be a great discussion starter."

"Gray provides an insightful and accessible overview of the negative reception of the apostle Paul, from the Corinthians to Kazantzakis. An important contribution is the way in which Gray steers a reasonable middle course amid choppy, polemical waters. This book has great potential for sparking lively discussion in a classroom setting."

David L. Eastman, author of Paul the Martyr: The Cult of the Apostle in the Latin West

"Gray has read broadly to identify negative attitudes toward Paul. The book includes critiques with origins in Jewish, Muslim and Christian traditions ranging from antiquity to our time. To establish such a rich collection is quite an achievement, but there is more. The second part of the work examines the contexts, subtexts and pretexts of all these critiques. . . . The book ends by creatively addressing the perennial question of the relation between Jesus and Paul from the perspective of comparative religion. All in all, this volume covers an amazing amount of ground. Gray's lucid and at times humorous style makes this book accessible to a wide audience."

"In a wide-ranging new book, Patrick Gray . . . reviews attitudes toward Paul among Jews, Muslims, and critics of Christianity, from antiquity to the present. With clear prose and wry humor, Gray navigates the long, strange history of criticisms of Paul. The sheer variety makes it difficult to believe that all refer to the same person."

"Gray offers readers a kaleidoscope of negative receptions of Paul from early Christian times to the present day. The survey is scholarly and comprehensive. . . . As a salutary reminder that even the greatest have their critics and enemies, the book has value beyond its immediate intended readership. . . . [Gray] is doing some service to scholarship by simply presenting the negative side only. This approach has its merits, and Gray's anthology of anti-Paulinism will certainly have its place in the halls of academia. . . . An extensive bibliography of some thirty-three pages, together with a valuable three-fold index, makes the book a veritable treasure trove for scholarly research. One hopes that the author will consider writing, with corresponding erudition and panache, a complementary volume, presenting the other side of the coin--the positive reception of Paul in the first century and since then. That would be a notable addition to Pauline scholarship and a worthy complement to [this] book."

"This is easily the best book I've read this year! . . . This is a brilliant volume, a luminous meta-critical study of the criticism of Paul, and compulsory reading for anyone engaging Pauline studies or interested in Christianity and culture."

"Gray's witty book raises some difficult and often avoided issues over Paul and his historical and cultural perception. . . . Gray attempts to prosecute the accusation from many quarters that Paul has deviated from the true message of Jesus. In doing so, he covers a wide variety of sources, from ancient and biblical, via the medieval to the modern and contemporary. Even Martin Scorsese and Mel Gibson do not evade the debate! As well as Christian views, Gray explores the problematic role of Paul in Jewish and Muslim theology and thought too. A vast amount of ground is covered in an economic 262 pages without any major compromise on detail or depth. An innovative twist is a chapter which looks at parallels to the Pauline founding problem in other faiths. . . .This is particularly effective because it helps to show how natural the development and contract of thought is between prominent figures within religions."

"Not the average book on Pauline reception, this volume surveys the phenomenon of anti-Paulinism from the first into the twenty-first century. . . . Gray is erudite, humorous, accessible, and introduces bibliography and perspectives not familiar to many exegetes. Gray's work raises questions of basic method that have broad implications for scholarship and would also serve well in an undergraduate class on Paul and Christian origins. I can hardly recommend it more highly. Anyone interested in understanding the apostle, his critics, and the religious and cultural assumptions involved in evaluating him will benefit greatly from this book."

"Gray provides a lively survey of the numerous ways readers have rejected Paul, often by identifying him as the founder of Christianity. Gray also offers insightful analyses of why readers from various times and perspectives described Paul as they did. . . . Gray's impressive breadth of knowledge is complemented by incisive and balanced analysis."

"Gray outlines the breadth of anti-Pauline sentiment, as well as its lack of coherence. . . . For both those who despise Paul, as well as for those who revere him, Gray's book provides a valuable summary."

"Gray provides a thorough survey beginning in the first century up through the modern era of those who 'regard Paul as a problem, indeed, the most nettlesome problem of the last two thousand years. Everyone loves Jesus, it seems, but Paul is another matter.' Gray has much material with which to work and no shortage of striking quotes from figures ranging from cultural critics to political leaders. . . . Gray's work is a wonderful contribution to Pauline studies and a delight to read. He writes with a light touch as he treats a most serious topic. Evangelicals who regard Paul as a brother will do well to grapple with his mixed legacy among other interpreters throughout the ages."

"An interesting and atypical study of Paul."

"[A] wide ranging survey. . . . While Gray's survey of Paul's critics may not be exhaustive, it certainly covers a lot of ground and is an engaging read. . . . As one takes Gray's journey through the history of anti-Paulinism, the reader is not so much moved in their own opinion of Paul as they gain a greater appreciation of the motivations and contexts of his critics. It is a good reminder for the church today to ensure it steps back from debates with its critics for long enough to gain an appreciation of their driving motivations, in order to more productively engage with them."