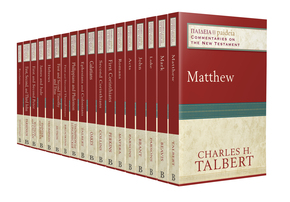 The Paideia New Testament commentary series offers fresh readings of the biblical texts in light of ancient culture and modern issues. Now all eighteen volumes in the series, covering the entire New Testament, are available for students, pastors, and other readers. Designed to be usable, readable, and concise rather than exhaustive, this series is conversant with contemporary scholarship, draws on ancient backgrounds, and attends to the theological nature of the texts.

Praise for the Paideia Series

"The Paideia Commentary series has established itself as a solid series of concise works that focus on the final form of the biblical text, highlighting narrative flow, rhetorical devices and structure, and commenting particularly on relevant historical background and theological significance."--Craig L. Blomberg, Denver Journal

"[I] continue to be impressed by the contributors' skill in combining academic rigor with accessibility. . . . [Series authors] combine historical and linguistic analysis with theological reflection, which makes these commentaries useful for those interested in bridging the gap between the ancient world and contemporary Christianity (seminarians, clergy)."--Michael Gilmour, Catholic Biblical Quarterly

"The Paideia commentary series is . . . making a strong impact both in terms of the overall approach of the series and the quality of the . . . individual volumes. . . . Although the series states that it is aimed primarily at students, there is much here for readers at all levels."--Paul Foster, Expository Times

"This helpful series is designed for students who want to explore the New Testament writings in depth, including the cultural, literary, and theological dimensions of a particular New Testament book and its continuing significance for today."--Donald Senior, CP, The Bible Today

"Paideia Commentaries seek to strike a balance between the core questions of critical discussion, sensitivity to the rhetorical strategies, theological convictions, cultural contexts of the text, and accessibility to readers perhaps unfamiliar with, or disinclined to delve deeply into, the scholarly debates."--Judith M. Lieu, Review of Biblical Literature