Over the Misty Mountains 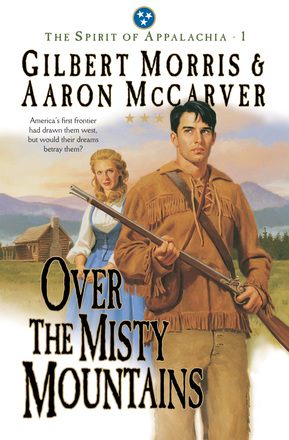 A New Historical Fiction Series From an Exciting New Team!

When Aaron McCarver met Gilbert Morris at the CBA convention in 1991, he never dreamed that those initial discussions would ultimately lead to his conceiving a historical fiction series that he would write with Gilbert Morris. THE SPRIT OF APPALACHIA chronicles the story of the settlers of America's first frontier--the lands over the Appalachian mountains--and of faith that carried them through the harshest of times.

Over the Misty Mountains is the story of Hawk Spencer, a man whose bitterness over the loss of his wife drives him from his home in Virginia and causes him to seek the frontier to escape his pain. Becoming a skilled trapper, Hawk is persuaded to lead a wagon train over the mountains before the snows come, but the trail is marked by sabotage from an old enemy of Hawk's.

When renegade Indians attack the wagon train and leave Elizabeth MacNeal and her children without a husband, how will Hawk respond to Elizabeth's resilient faith in God? And how will the MacNeals survive the frontier settlement.