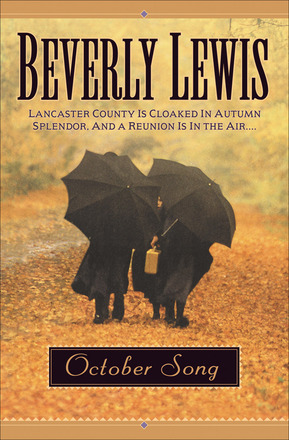 Lancaster County is Cloaked in Autumn Splendor, and a Reunion Is in the Air

Awakening to darkness, Katie, in a dreamy haze, thought surely she was back in her bedroom at Hickory Hollow, that it was time to rise 'n shine, hurry into choring clothes, get out to the barn to help with the milking. But, as she lay there listening, ears attuned for her father's call up the steps, she realized she was not a girl growing up in the Lapp home. She was a young married woman, curled up next to Dan, her sleeping husband....

From newlyweds Katie and Dan living in the shadow of the shunning, to Rachel and Philip embracing parenthood even as he acclimates to Amish life as an outsider...From the courtship of Lydia Cottrell and her betrothed, Levi King, to Sarah Cain, now a wife and mother struggling to bridge her own life with that of the People... October Song is overflowing with the simpler things of life that make a Lewis novel an unforgettable journey into the depths of the human heart.