The Future for a New Ecumenism 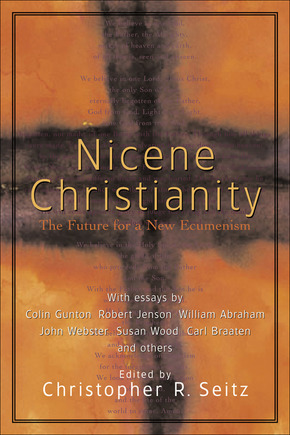 "A coherent and nuanced argument directed toward the renewal of classical orthodoxy. . . . Appropriate for scholars of historical theology ranging from upper level undergraduates to seminarians and graduate students."--Gerald Biesecker-Mast, Religious Studies Review

What was the relationship between the church, Scripture, and the creeds of the early church? What implications do these creeds, specifically the Nicene Creed, have in today's postmodern, ecumenical context?

Nicene Christianity presents some of the world's premier theologians in an exploration and exposition of the Nicene Creed and explores the practical implications of confessing the Creed as Christians, then and now.

"I believe in One God, the Father Almighty . . . Maker of Heaven and Earth, and of all things visible and invisible" --Christopher Seitz

"And in one Lord Jesus Christ . . . begotten not made"--Colin Gunton

"Being of One Substance with the Father" --Alan Torrance

"By whom all things were made"--Augustine DiNoia

"Who for us men and for our salvation . . . and was made man" --Robert Jenson

"And on the third day he rose again" --Carl Braaten

"And ascended into heaven . . . whose kingdom shall have no end"--Douglas Farrow

"And I believe in the Holy Ghost . . . who proceedeth from the Father (and the Son)" --Thomas Smail

"Who with the Father . . . who spake by the prophets" --Kathryn Greene-McCreight

"I acknowledge one baptism" --Susan Wood

"And I look for the resurrection . . ."--Vigen Guroian

"The essays in this volume by some of the world's premier theologians explore the ecumenical and practical implications of confessing the Creed as Christians, in the ancient world, and in today's postmodern context. The authors represent almost all the major traditions. None of them wishes to leave the tradition that has provided nurture in Christ, but all of them recognize among themselves a unity that lies deeper than these denominational badges. They argue that if the creed that united Nicene Christianity could once more shape and unify the mind and heart of the church, there might indeed be a future for a new ecumenism."--Ecumenism

"Exploring ecumenical and practical considerations with regard to the Nicene Creed in the modern day, Nicene Christianity is a fascinating, informative read, and a welcome, recommended addition to Christian Studies supplemental reading lists and academic reference shelves."--The Midwest Book Review

"This book brings together mainline Protestant, evangelical, and Catholic writers who agree that the Nicene creed provides helpful resources for church identity and unity in the postmodern world. . . . A coherent and nuanced argument directed toward the renewal of classical orthodoxy. The essays are accessible and would be appropriate for scholars of historical theology ranging from upper level undergraduates to seminarians and graduate students. Because many of the essays include analysis of the circumstances surrounding the formulation of the Nicene creed, especially the Arian controversy, the book may also be relevant to some church history courses."--Gerald Biesecker-Mast, Religious Studies Review

"The papers vary from the erudite to the readily accessible, with the presenters being Protestant, Orthodox, and Roman Catholic theologians. . . . Several of the chapters are outstanding and could be recommended to all adult readers. . . . A good choice for advanced programs in religious studies and seminaries."--Cecil R. White, Catholic Library World

"The contributors to Nicene Christianity: The Future for a New Ecumenism recognize the theological nature of ecclesial existence and wager that ecumenism cannot flourish in the soil of doctrinal minimalism and moral relativism, but only in fellowship with the church's rich confessional tradition. . . . This book offers a serious challenge from the mainline to conservative Christian denominations, especially to those in congregational traditions."--Scott R. Swain, Southwestern Journal of Theology