What It Has to Say to Today’s Church 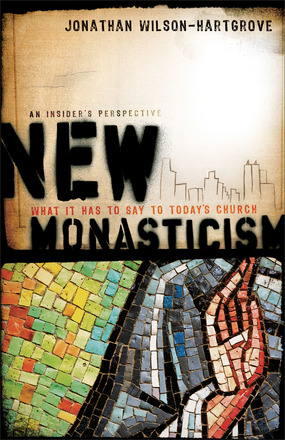 "It's hard to be a Christian in America," writes Jonathan Wilson-Hartgrove, a leader in the new monasticism movement in America, a growing group of committed Christians who are living lives of radical discipleship.

However, the movement doesn't mirror traditional monasteries--many members are married with children and have careers, yet they live differently, often in community in once-abandoned sections of society.

Wilson-Hartgrove founded a new monastic community and works with an alternative theological collaborative. In this book, he takes readers inside new monasticism, tracing its roots through scripture and history and illuminating its impact on the contemporary church. He identifies the key tenets of new monasticism, including:

"Monasticism isn't about achieving some sort of individual or communal piety. It's about helping the church be the church," Wilson-Hartgrove writes. A must-read for new monastics or those considering joining the movement, this book will also appeal to 20- and 30-somethings, pastors, leaders, and those interested in the emerging church.

"It is my sincere hope that new monasticism will grow so strong and healthy and widespread that every follower of Jesus in every church has the opportunity, if not to actually live in a new monastic community, to at least have enough proximity and relationship to be influenced by it. This book can help that dream and prayer come true."--Brian McLaren, author of Everything Must Change

"This is the most informative work to date on its subject. Written in fluid, accessible prose and without pretense, it is also rich in personal and historical insights. The result is a book that is both beguiling and highly credible."--Phyllis Tickle, author of The Divine Hours

"This book demonstrates how embracing the lifestyle prescribed by Jesus is a realistic possibility in our present age. It also shows how countercultural Christianity can provide a needed critique of our self-centered, consumerist society."--Tony Campolo, Eastern University

"This book is a scavenger hunt into Christian history and the abandoned places of Empire where the Spirit is stirring today. It's like digging around in the dirt trying to find the pearl we buried, the pearl that is so beautiful it's worth giving up everything else in the world for."--Shane Claiborne, author of The Irresistible Revolution

"Jonathan Wilson-Hartgrove is bringing things both old and new out of the great Christian storehouse! New monasticism is discovering what is always rediscovered--and always bears great life for the gospel."--Fr. Richard Rohr, OFM, Center for Action and Contemplation

"[The book's] invigorating second half explores the marks of New Monasticism, including geographic relocation, redistribution of wealth, ecumenism, peacemaking and submission to the church. These chapters . . . offer a treasure trove of concrete examples and stories of real communities that practice these values."--Publishers Weekly

"An intriguing book. . . . [Wilson-Hartgrove] is not just a theorist but an active member of a community of new monastics in economically depressed Durham, North Carolina. . . . His is a clarion call to embody the teachings of Jesus. . . . For inspiring stories and a way to spark dulled Christian imaginations New Monasticism is an essential read."--James D. Wheeler, YouthWorker Journal

"Thick with historical and biblical references, the book follows Wilson-Hartgrove and his wife's decision to drastically uproot their lives and commit to a lifestyle of simplicity--a lifestyle that would reflect the gospel of love. Amid details of the history and decisions behind the movement, including thoughts on poverty, war and politics, Wilson-Hartgrove shatters any misgivings or confusion outsiders may have regarding the heart of this bold movement."--Corene Israel, Relevant

"Using a string of personal stories, illustrations, and insight, Hartgrove offers an insider's perspective on how the [new monastic] movement began and what it hopes to accomplish. This isn't a dry investigation, but rather the radical, first-hand experience of his search to live out the gospel. . . . If you've ever been interested in monasticism or intentional Christian communities, this book is definitely worth a look."--Jason Santos, Journal of Student Ministries

"Wilson-Hartgrove tries to show what the wider church can learn from the new monastics, and vice versa. . . . Not all Christians will follow the lead of the new monastics to create intentional communities in abandoned places of empire, but those that do . . . can teach the rest of us a lot. . . . Wilson-Hartgrove writes beautifully."--Jason Byassee, Christian Century

"Written for the lay reader, this book is a good introduction to the new monasticism. Recommended for pastors, lay Christians, and libraries."--Glenn M. Harden, Religious Studies Review

"Wilson-Hartgrove is well-qualified to represent those people and communities identified with 'new monasticism.'. . . I consider the greatest value of this book not to be in the reading of the text, but in the exploring of the practices. . . . Wilson-Hartgrove invites us to reconsider what it means to be the Church of Jesus in the midst of a culture that does not easily welcome the values of Jesus. He invites us to find our identity as a people of God whose life encompasses a loving relationship with God, with those who surround us, and with those who society (but not Christ) forgets. He invites us to practice what we preach."--Evan Howard, Journal of Spiritual Formation & Soul Care

"Writing with the long lens of a historian and the close-up view of someone living in an intentional Christian community, Wilson-Hartgrove identifies the major theological lessons that contemporary 'new monastics' might teach the church at large. . . . The book is full of inspiring stories. . . . Preachers, educators, and anyone concerned with how the church can become a genuinely alternative community will find a coherent theological perspective and lots of challenges to the status quo in this book."--Rebecca M. Spooner, Congregations

"This book, like New Monasticism itself, translates the gospel for 21st-century western culture. [Wilson-Hartgrove's] language is plain and clear. He avoids ramped-up political rhetoric; you won't find a clear conservative or liberal bias. But embodying the gospel transcends traditional left and right divisions and boldly proclaims allegiance to the Kingdom of God. This little book is decidedly pro-church, inviting Christians to practice love always, everywhere we go and to be united by that love. . . . A timely, inspiring word from a wise and courageous visionary."--Kurt Armstrong, ChristianWeek

"[A] very readable book. . . . Wilson-Hartgrove's writing is straightforward, unpretentious, and winsome. . . . New Monasticism is truly a compelling book that anyone in the church could read. Ideally, it should be read in a group, because the vision it casts is not for individuals made better by God, but for people formed together to bear a collective witness. . . . In a society churning with economic problems, mounting bioethical questions, and religious violence, his words and the witnesses of his communities may be just what the church needs."--Gavin Dluehosh, Covenant Companion

"Provide[s] a fascinating glimpse into the applications of Christian spirituality in the postmodern world. I highly recommend [it]. . . . Engaging and well-written. . . . Wilson-Hartgrove's smooth writing style endears him to the reader, allowing him or her a glimpse into a very intentional, biblical, historically grounded, and morally aware practice of Christian faith in community. . . . I am . . . drawn to Wilson-Hartgrove's passionate desire for a relevant, lived faith with teeth. His is an engaged lay spirituality, with emphasis on that second adjective."--Tim Muldoon, Spiritus

"Hartgrove offers the church new clarity on what monasticism means in our American context. . . . At its best, monasticism challenges the church to close the gap between what we believe and what we do. This is why I agree with Hartgrove that the American church needs a prophetic monasticism to reveal the church's own contradictions and point the way beyond them. . . . New Monasticism is a book that will encourage and inspire those who are actively seeking ways to embody fully their Christian faith. It is also a book that will challenge many to leave their Christian comfort zones."--Ross Halbach, Cultural Encounters