Women in the Book of Genesis 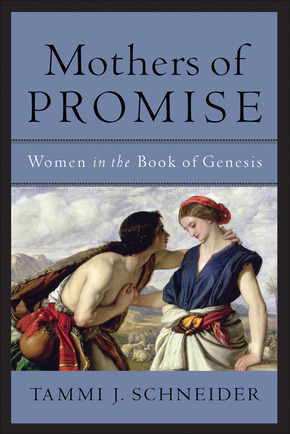 "Schneider's extensive study of the women in Genesis revitalizes and enhances the current understanding of these women and the book of Genesis as a whole. . . . It has the potential to be used as a textbook for a variety of courses, yet it is thorough, well-documented, and deals with the original language of the text and thus is a good resource for further scholarly research."--Ellen White, Review of Biblical Literature

The women in Genesis played a vital part in shaping Israel's foundation, growth, and development, but most exegetes have not given the women adequate attention--until now. Through a fresh, close reading, respected Hebrew scholar Tammi Schneider examines the roles and functions of these women who, with the men, form the basis for the future of Israel.

Schneider looks at each woman's story from various angles and within the context of her relationships and the message of Genesis as a whole. Allowing the details of the text to challenge traditional readings, Schneider also includes ancient Near Eastern background material and archaeological insights for a fresh reading of familiar stories. Sections cover the matriarchs (from Sarah to Rachel), mothers of potential heirs (including those who threaten the promise), mothers before the promise, and women who do not bear children but still play a role. Women not often discussed, such as the wives of Lamech and Esau, are included. The result is a creative and reliable discussion to supplement studies of Genesis and the roles and importance of women in the Bible.

"With remarkable clarity, precise detail, lucid thought, comprehensive research, and careful attention to text and translation, Tammi Schneider offers scholars and students a marvelous and intriguing volume that brings to life the women of Genesis. This beautifully crafted text raises new questions and presents new insights, especially with regard to the male characters in Genesis. Schneider's work makes a brilliant contribution to the field of biblical and gender studies."--Carol J. Dempsey, associate professor of theology, University of Portland

"You might be tempted to think that over the past couple of decades everything that could be said about the women in Genesis has been said. Tammi Schneider shows that this is not so, bringing a whole new set of questions and making it possible for us to see some quite new things."--John Goldingay, David Allan Hubbard Professor of Old Testament, Fuller Theological Seminary

"Tammi Schneider has marshaled impressive amounts of raw data to re-examine two dozen female characters in the book of Genesis. Using an innovative method that focuses primary attention on the precise wording of each woman's appearance(s) in Genesis, Schneider investigates each character with both passion and rigor. Readers who have grown too complacent in their putative understandings of these literary figures will find fresh breezes rustling every page of this study."--R. Christopher Heard, associate professor of religion, Pepperdine University

"Many interpreters of the book of Genesis, conscious of the male preference obvious within the stories, argue that the women portrayed there serve men's goals. This position might describe the way many stories seem to unfold but it ignores the fact that Genesis, indeed the entire Bible, really highlights God's goals. Schneider's reading of several biblical stories shows how God works through women to accomplish these ends. . . . [Her] approach brings the women alive in new and exciting ways. The book is meant for readers who have some basic knowledge of biblical analysis. It will also make a fine contribution to the area of gender studies."--Dianne Bergant, CSA, Bible Today

"[Schneider] complements familiar observations on women's roles in Genesis with several new insights. Notably she challenges the utility of the category 'matriarchs,' rephrasing questions of inheritance rights, attending to the nuances of the Hebrew, and adducing possible connections between biblical narrative and ancient Near Eastern legal custom. . . . Schneider's 'new method' of 'verbing the character'. . . yield[s] intriguing readings concerning women's generally positive relationships to each other and to Israel's Deity, as well as their surprisingly negative relationships to their husbands and fathers. This volume will be especially useful for church and synagogue adult education programs. . . . Recommended. General readers; upper-level undergraduates and above."--A.-J. Levine, Choice

"Schneider's extensive study of the women in Genesis revitalizes and enhances the current understanding of these women and the book of Genesis as a whole. This work serves to demonstrate how inadequate the term 'Patriarchal History' is to describe these texts and revolutionizes the way this biblical book should be read. . . . [Schneider] has presented a very convincing and complete portrait of the women in Genesis. This book provides several services to the academic community. It has the potential to be used as a textbook for a variety of courses, yet it is thorough, well-documented, and deals with the original language of the text and thus is a good resource for further scholarly research."--Ellen White, Review of Biblical Literature

"The book offers a detailed portrayal of the women of Genesis, and, through close linguistic, semantic, and historical analysis of the Hebrew text, Schneider uncovers how in this specific Biblical text 'women function as determiners of who receives the Israelite Deity's promise.'. . . Mothers of Promise fully engages the reader's attention; it is a thought-provoking book, full of interesting psychological insights, that emphasizes the most subtle nuances in the text and the connections between the Book of Genesis and other biblical texts."--Maria Beatrice Bittarello, Theological Book Review

"A careful study of the women characters in the book of Genesis. . . . What is most significant about this book is that Schneider rarely gives value judgments of her own, but focuses almost completely on the perspective of the narrator or characters within the text, to the extent that these can be discerned. There is much to be said for this approach. Although there is a place for judging the behavior of biblical characters in order to determine how their stories may best be used today, there is often a tendency to prejudge before a full attempt is made to understand the characters within their own time and place. . . . Mothers of Promise is well worth reading. It should bear much fruit for those readers who want to learn as much as they can from the stories of the women of Genesis."--Alice Ogden Bellis, Interpretation

"Schneider investigates the women of Genesis with a fresh lens. Her unique organization of material allows for novel comparisons and insights in this clearly written, interesting book, which will be welcomed by scholars, instructors, and students alike. Using an eclectic methodology, Schneider's approach is primarily literary, yet her reading of cultural and religious practices alluded to in Genesis in light of what is known from ancient Near Eastern texts showcases appropriate historical-critical awareness. Her literary insights are gleaned from her creative organization: she explores the ways in which the women are described, how they function as subjects or objects of verbs, and the nature of their connection with the God of Israel. Such inquiries allow readers to think of these narratives in new ways."--Sharon Pace, Catholic Biblical Quarterly

"Respected Hebrew scholar and archaeologist Tammi Schneider provides a careful reading of the stories of [the] 'Women of Promise' whose lives formed a significant part of the foundation of Israel. Her creative approach challenges traditional ways of viewing these women and offers a different perspective on familiar stories. . . . A valuable supplement to studies of Genesis and the roles and importance of women in the Bible. It is a solid resource for studies of Genesis, women in the Bible, and women's issues."--Dialogue & Alliance

"A new and helpful study. . . . [Schneider] not[es] that her method of 'verbing the character' is applied solely to women and should also be applied to the male characters. This will provide a more complete picture of the female characters and will also reveal that the male characters are 'more multidimensional than traditional presentations.' Certainly, her fine study has demonstrated this multidimensional quality for the women in the narratives of Genesis. Her methodology presents fresh readings of their stories, challenges some traditional understandings of their characters and role, and reveals the key function and role they play in Genesis. I would recommend this book for undergraduates in upper-level classes, and graduate classes in Genesis, particularly those that undertake narrative and close readings of the biblical text."--Lissa M. Wray Beal, Journal of Hebrew Scriptures

"Mothers of Promise analyzes two-dozen female characters in the book of Genesis, showing their individual complexity and highlighting their crucial roles in determining how the Deity's promise is inherited. This analysis emphasizes the matriarchal aspects of the 'patriarchal history,' and offers fresh readings of these female characters. The book is written with clarity in a way that is accessible to general readers, as well as interesting to literary-minded scholars of Genesis. . . . Overall, Schneider's 'verbing the character' approach provides a practical and sensitive method for examining how the text presents and develops characters. . . . The attention to the women of Genesis, in the details of their actions and relationships, provides welcome insights into these interesting characters and continues the important investigation into gender in the Hebrew Bible."--Elaine James, Koinonia Journal