More Than My Scars

The Power of Perseverance, Unrelenting Faith, and Deciding What Defines You 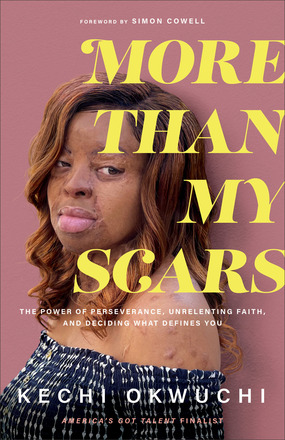 The first thing you will notice when you meet Kechi Okwuchi is her scars. One of just two survivors of a devastating plane crash that killed more than 100 people, 16-year-old Kechi was left with third-degree burns over 65 percent of her body. More Than My Scars is her incredible story. A story of not just surviving impossible odds but thriving in a world that is too often caught up with how we look on the outside rather than seeing that our true value is within.

Now in her early 30s, Kechi has spent the last 16 years refusing to be defined by her trauma. Follow her as she decides for herself what role her scars will play in her life before society decides for her. Her strong sense of identity, rooted in seeing herself the way God sees her, has allowed her to live authentically in a world that constantly seeks to define us by its ever-changing (and ever-shallow) standards. Kechi's story will inspire you to love and accept yourself as you are and confidently present your true self to the world.

"This is a story that needs to be read--a testament of what it means to not only deal with challenges in life that very few can imagine but to face them head-on and use them to bring hope to others."

from the foreword by Simon Cowell, executive producer and judge of America's Got Talent

"I was deeply moved by More Than My Scars. My dearest friend Okoloma died in the Sosoliso plane crash, and it was difficult to read Kechi's personal account of the crash, as it was to encounter the unutterable grief of those whose children died.
Still, this is a book about more than just a plane crash. It is about a mother's fierce and unending love, the bond between mother and child, the kindness of strangers, and the power of the human will. It is about hope, as Kechi writes of hope 'calling out to her.' It is about faith in God, a journey she documents with honesty and wit. And it is about her immense courage, which she does not even seem fully aware of.
Kechi's courage enables her to be realistic about her situation, and that realism--with accounts of her ups and downs, her expectations, and her irritations--is more inspiring than any cloying alternative ever could be. Her humor is refreshing, and one smiles--such as when she playfully likens her skin to a patchwork quilt--but with a kind of respectful hesitancy, all the while feeling grateful to her for her gorgeous humanity, her uncommon wisdom, and her grace. May all the readers of this lovely book feel the same gratitude."

Chimamanda Ngozi Adichie, award-winning and bestselling author of Americanah and Half of a Yellow Sun