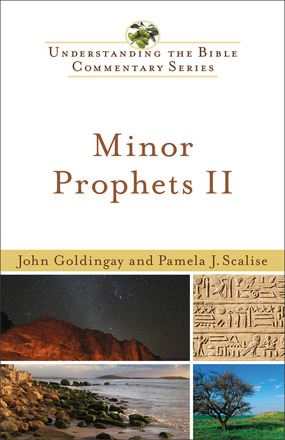 "There are rich resources here for believers, nonbelievers, and anyone in between who has an interest in the books of Nahum-Malachi. As both an ordained minister and seminary professor, I am particularly appreciative of Goldingay's and Scalise's application of rigorous critical inquiry in the service of both academy and church."--J. Clinton McCann Jr., Review of Biblical Literature
The Minor Prophets are those dozen Old Testament books that, in the time of Jesus, were usually written on one scroll since they were all fairly brief. The late Elizabeth Achtemeier prepared the New International Biblical Commentary on the first six: Hosea, Joel, Amos, Obadiah, Jonah, and Micah. This second volume deals with the final six books. John Goldingay writes on Nahum, Habakkuk, Zephaniah, and Haggai; Pamela Scalise takes on the longest, Zechariah, and the last, Malachi.

Like the authors of other volumes in the NIBC, Goldingay and Scalise utilize what is referred to as "believing criticism" when examining the biblical texts. Based on fidelity to critical analysis and sensitivity to the faith of both ancient and contemporary readers, this balanced approach enriches both the academy and the church. Following the series guidelines, the authors clearly explain the texts with additional notes regarding interpretation and "practical" reflection. For example, Goldingay issues a reminder that when the prophets spoke against the arrogance and sins of Assyria and Babylon, the Israelites needed to hear the word of God as a caution against their own pride and wickedness. He goes on to suggest that modern readers must remember, as well, that the same attitudes and actions that led to the downfall of these ancient Middle East empires can fall upon any and all who follow their example.

The New International Biblical Commentary offers the best of contemporary scholarship in a format that both general readers and serious students can use with profit. Based on the widely used New International Version translation, the NIBC presents careful section-by-section exposition with key terms and phrases highlighted and all Hebrew transliterated. A separate section of notes at the close of each chapter provides additional textual, linguistic, cultural, and technical comments. Each commentary also includes a selected bibliography as well as Scripture and subject indexes.

"John Goldingay and Pamela Scalise have produced a commentary informed by sound scholarship that ably serves both the biblical text and its variety of readers. The prophets under consideration in this volume, Nahum through Malachi, present a host of interpretive difficulties. Goldingay and Scalise navigate those difficult passages with wisdom and interpretive modesty. They write lucidly, with contemporary readers of the Bible in mind, while consistently, expertly, guiding us through the complex world of the text and its details."--Ben C. Ollenburger, professor of biblical theology, Associated Mennonite Biblical Seminary

"Goldingay and Scalise are seasoned, world-class scholars writing from a conservative-moderate viewpoint in a winsome, non-technical style, arguing cogently for their conclusions and covering a wide range of material succinctly. Any student, pastor, or scholar would enjoy owning this volume and would find much to interact with in every part."--Douglas Stuart, professor of Old Testament, Gordon-Conwell Theological Seminary

"An excellent addition to the New International Biblical Commentary series. . . . The authors have clearly succeeded in fulfilling the stated hope for the series. Their commitment to the meaning of the text and its authority for (and potential impact upon) the life of the church is evident. But even more evident is their careful, well-informed, and conscientious use of 'the full range of critical methodologies and practices.' In short, one need not be a believer to appreciate and benefit from the authors' interpretive work. There is plenty here for both academy and church. . . . Both Goldingay and Scalise are thoroughly grounded in historical and text criticism, and both are very adept at rhetorical-critical analysis . . . and philological study. . . . There are rich resources here for believers, nonbelievers, and anyone in between who has an interest in the books of Nahum-Malachi. As both an ordained minister and seminary professor, I am particularly appreciative of Goldingay's and Scalise's application of rigorous critical inquiry in the service of both academy and church."--J. Clinton McCann Jr., Review of Biblical Literature

"The work divides the prophetic books covered into two chronological sections of three books each (Nahum-Habakkuk-Zephaniah and Haggai-Zechariah-Malachi), offering introductions for each grouping, as well as each book. The introductions cover most standard critical issues, with a special focus on historical context and rhetorical features of Hebrew poetry. . . . The main expositions concentrate on thematic and theological matters, devoting some attention to links between the prophets and the New Testament and often expounding the text's meaning for Christian perspectives. . . . The discussion is consistently well informed by current scholarship and features a particular interest in post-colonial readings that explore how the books indirectly address western imperial powers in the context of modern nation-states. The commentary is relevant for scholars but most useful for students and ministers."--Brad E. Kelle, Religious Studies Review