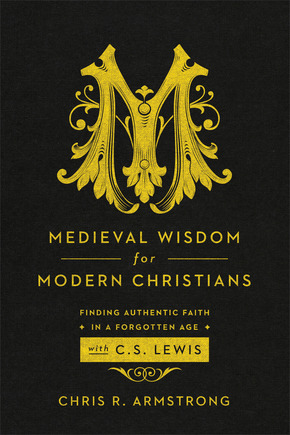 Many Christians today tend to view the story of medieval faith as a cautionary tale. Too often, they dismiss the Middle Ages as a period of corruption and decay in the church. They seem to assume that the church apostatized from true Christianity after it gained cultural influence in the time of Constantine, and the faith was only later recovered by the sixteenth-century Reformers or even the eighteenth-century revivalists. As a result, the riches and wisdom of the medieval period have remained largely inaccessible to modern Protestants.

Church historian Chris Armstrong helps readers see beyond modern caricatures of the medieval church to the animating Christian spirit of that age. He believes today's church could learn a number of lessons from medieval faith, such as how the gospel speaks to ordinary, embodied human life in this world. Medieval Wisdom for Modern Christians explores key ideas, figures, and movements from the Middle Ages in conversation with C. S. Lewis and other thinkers, helping contemporary Christians discover authentic faith and renewal in a forgotten age.

Contents
1: My Angle of Approach
2: C. S. Lewis--A Modern Medieval Man
3. Getting Rooted: Tradition as Source of Truth
4. Getting Thoughtful: The Medieval Passion for Theological Knowledge
5. Getting Moral: The Ethical Fabric of Medieval Faith
6. Getting Merciful: Why Medievals Invented the Hospital
7. Getting Earthy: God's Second Book--The Natural World
8. Getting Passionate: Medieval Faith as a Religion of the Heart
9. Getting Human: How the Incarnation Lifts Up Our Humanness
10. Getting It Together: Responding to Our Medieval Heritage and Reflecting on the Ascetic and Monastic Paths

"With lilting prose and sparkling insight, Armstrong draws us into the spiritual riches of medieval Christianity. He shows how the era managed to combine faith and reason, spirit and nature, health and healing, joy and discipline, and Word and sacrament in a way that all Christians, and especially evangelicals, acutely need today. Armstrong uses the insights of C. S. Lewis and other modern interpreters to shine a light on that long-past yet still remarkably relevant era. This book will serve equally well in college, seminary, and church education classrooms."

"Evangelicals have come a long way in the past twenty years in recovering the richness of the Christian past. There is still a long way to go, and this book takes a big stride in the right direction. In Medieval Wisdom for Modern Christians, Chris Armstrong offers a convincing rationale for why evangelical believers are quick to reject the Middle Ages but slow to appreciate the era's theological and spiritual riches. Using the wisdom of C. S. Lewis as a point of entry, Armstrong unpacks the material and sacramental world of the medieval church, demonstrating why such dated material is not only relevant but also much needed in the life of the evangelical church today. As Lewis knew well, the way to the future lies in the past, and Armstrong provides a fascinating glimpse into what will be gained from exploring medieval wisdom. This is a must-read for anyone who cares about the evangelical church's future."

Greg Peters, Biola University; author of The Story of Monasticism

"Armstrong's approach to introducing twenty-first-century Christians to the rich resources of medieval and monastic wisdom is ingenious. He uses C. S. Lewis to invite us into a conversation with other contemporaries who have found that this oft-neglected period of Christian history provides the kind of embodied and holistic spiritual life that is needed as a remedy for today's gnostic, individualistic, and shallow spirituality. The reader who knows little about the medieval period will end up with an appetite whetted for more and with enough wisdom to begin practicing a deeper faith."

"With a searching evaluation of his own evangelical leanings and inspired by the discerning medievalism of his spiritual mentor C. S. Lewis, Chris Armstrong takes us on a delightful tour through the insights of medieval Christians that have most profited him. With Armstrong's sparkling prose, the journey never turns arcane or becomes tiresome, and it leaves us with many treasures to ponder."

Robert B. Kruschwitz, professor of philosophy and senior scholar in the Institute for Faith and Learning, Baylor University

"Accessible and engaging, Medieval Wisdom for Modern Christians is a wonderful introduction to our neglected Christian tradition for all those who feel something is missing in the modern church. It is also a real treat for fans of C. S. Lewis."

"Chris Armstrong knows what ails modern American Protestantism, and the right medicines, he says, are available on the pharmacy shelves of the Middle Ages. Here is an excellent introduction to medieval spirituality, philosophy, theology, and Christian practice, which offer strong medicines for serious conditions."

"Armstrong is a lucid and engaging writer, executing well a book on medieval wisdom. . . . Someone may be tempted to ask, 'medieval wisdom,' that's an oxymoron, right? Well, no, it isn't and Armstrong does a good job of explaining why this is so. . . . Armstrong's work must be commended for its erudition and scope. . . . For about fifteen years now there has been an overt and intentional recovery of the pre-Reformation Christian tradition among Protestants. . . . The work that has been done by Protestants, especially of the evangelical kind, is mostly limited to the earliest Christian centuries. The Middle Ages seem, unfortunately, to continue to be ignored or merely tolerated from a distance. So Armstrong's work goes a long way in dispelling the perceived irrelevance of this millennium of faith and life. Anyone who reads this book will benefit from it but it will be those who incarnate this forgotten age's message that will make the biggest difference for modern Christians."

"Armstrong writes Medieval Wisdom as an evangelical Protestant. . . . His reflections arise from his own background, which he incorporates appropriately and unpretentiously into his study, as well as from his academic study of evangelicalism. . . . With the wit and wisdom of a storyteller, the precision of a scholar, and the clarity of an essayist, Armstrong brings in numerous medieval thinkers to demonstrate the indispensability of the medieval tradition to understanding the meaning and significance of Christian doctrine and ethics, and their necessary relationship to one another. . . . Medieval Wisdom is a remarkable book, and as such, it serves as an eminently appropriate reflection of its author. Armstrong's project--to diagnose American Protestantism's ailments and to prescribe a program of convalescence informed by a thousand-year-old tradition, itself mediated to the modern patient through a mid-twentieth century Oxford don--might be an impossible one even for the brightest and wisest among us. Armstrong carries out this project with careful historical and theological analysis, vulnerable autobiographical detail, and piercing criticisms that are attended by grace and compassion, along with a light-heartedness and humor that never fail to elicit a smile or even a laugh in the midst of reading. The book is a delight to the mind, heart, and spirit, with appeal across the denominational spectrum."

"[This book] breaks open the medieval mindset of C. S. Lewis in a clear fashion, and deftly argues why Evangelicals should take a deeper look at Church history--specifically, the Middle Ages. . . . It's the lessons of Armstrong's book [that] I find striking today, as a rebuke to all who fail to recognize the importance of medieval thought--even some of my fellow Catholics. . . . Armstrong's book provides an Evangelical endorsement of many traditions that have always been common to the Catholic Church, and he speaks highly of the monastic life."

"Armstrong knows well his audience and our strengths and weaknesses. And he also knows Lewis. . . . The work serves as a much-needed, historically grounded call to a more embodied, holistic spiritual life. A side benefit of this book . . . is its ability to help those leading Millennials to appreciate these younger Protestants' move toward more liturgical worship."

Introducing Medieval Wisdom for Modern Christians How was C. S. Lewis influenced by the medieval era? A Christian approach to the material world Misconceptions about the medieval era Why do we need tradition?