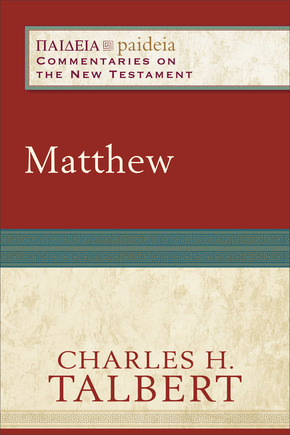 "Happy are those students (and pastors and teachers) who will read Talbert's commentary early in their formation. They will learn from a master teacher how to do biblical exegesis from historical, literary, and theological perspectives."--Daniel J. Harrington, SJ, Catholic Biblical Quarterly
In this fresh commentary, the fourth of eighteen volumes in the Paideia series, a leading New Testament scholar examines cultural context and theological meaning in Matthew. This commentary, like each in the series, approaches each text in its final, canonical form, proceeding by sense units rather than word-by-word or verse-by-verse. Each sense unit is explored in three sections: (1) introductory matters, (2) tracing the train of thought, (3) key hermeneutical and theological questions. Graduate and seminary students, professors, and pastors will benefit from this readable commentary, as will theological libraries.
About the series: Paideia commentaries explore how New Testament texts form Christian readers by
Forthcoming volumes in the Paideia series include:
Frank J. Matera on Romans
Pheme Perkins on First Corinthians
Raymond F. Collins on Second Corinthians
Editorial Board
Paul J. Achtemeier (emeritus, Union Theological Seminary in Virginia)
Loveday Alexander (University of Sheffield)
C. Clifton Black (Princeton Theological Seminary)
Susan R. Garrett (Louisville Presbyterian Theological Seminary)
Francis J. Moloney, SDB (Salesian Province of Australia)

"Most commentaries rewrite earlier commentaries. The better ones, to the contrary, often go their own way. Talbert's work happily is of the latter type. It regularly offers fresh readings and new comparative materials, especially from Greco-Roman sources. This is not a tired rehashing but a welcome contribution."--Dale C. Allison Jr., Princeton Theological Seminary

"In this stimulating reading of Matthew's Gospel, Charles Talbert draws on his extensive learning to attend insightfully to various cultural, literary, and theological dimensions of the Gospel. Students will find his clear prose, insightful discussion, and theological reflections especially valuable. I will be adding this commentary to course bibliographies."--Warren Carter, Phillips Theological Seminary

"With an impressive command of historical, textual, literary, cultural, and theological issues, Charles Talbert has produced a commentary on Matthew that is lucid, compelling, and eminently useful for interpretation and proclamation. In a crowded field of volumes on the First Gospel, this one stands out."--Thomas G. Long, Bandy Professor of Preaching, Candler School of Theology, Emory University

"This is a remarkable book! In brief compass, Talbert provides a fresh reading of Matthew's Gospel as a book that is grace-oriented from start to finish. His interpretations are lucid and compelling, arising from analysis of the text on its own terms and in consideration of its literary and historical contexts. Students and church leaders will value this book as either a first introduction to the Gospel of Matthew or a refresher volume that will update (and possibly correct) what they have read previously. Either way, all readers will come to a deeper appreciation of the Gospel of Matthew and its role in the life of the church."--Mark Allan Powell, professor of New Testament, Trinity Lutheran Seminary

"The intent of this fine commentary series is to take each biblical book as a whole (rather than a verse-by-verse approach) and, taking into account its literary, cultural, and social context, to unlock the theological and pastoral message of the text. Veteran biblical scholar Charles Talbert . . . provides an excellent contribution to the series in his commentary on the Gospel of Matthew."--Donald Senior, CP, The Bible Today

"The purpose of the Paideia commentary series is to comment upon sense units rather than verse-by-verse analysis, and to highlight the theological concerns of the text under discussion. Talbert performs both of these tasks in an engaging and admirable manner, but without neglecting important historio-critical matters. . . . Each section of the commentary discusses a range of different aspects of the text. . . . This section is interspersed with tables outlining the narrative structure or related issues of interest . . . along with illustrations. . . . Such features, which occur throughout the commentary, ensure that readers will find its multimedia approach highly informative and usable. Talbert has produced a commentary on Matthew that offers new insights into the text and meets the goals of the Paideia series. This treatment deserves a place on bookshelves alongside the more substantial treatments of the Matthean text. Like Talbert's previous volume in this series on Ephesians and Colossians, this commentary offers rich theological insights into the text it analyzes."--Paul Foster, Expository Times

"Talbert comments on the 'final text' of the gospel (rather than on Matthew's sources), and he does so very effectively."--International Review of Biblical Studies

"What is striking in [Talbert's] discussions is the large number of data (references, quotations, and so on) from the ancient world that are included in order to enable one to grasp the mindset of the ancient reader. This material, as well as outlines, parallels, and the discussion of some critical issues, is often included in sidebars. There is also a judicious use of pictures . . . and charts. . . . A helpful contribution."--Peter H. Davids, Bulletin for Biblical Research

"[This] is no ordinary commentary. . . . In addition to the volume's creative format, what makes it stand out is the combination of Talbert's knowledge of ancient Greek and Latin literature, his theological sensitivity, and his skill at literary analysis. . . . The many sidebars include a large amount of historical background. On disputed issues . . . Talbert lays out the various interpretations in a balanced way while nudging readers toward what he regards as the more probable positions. His coverage of modern scholarship is unobtrusive yet thorough. . . . Happy are those students (and pastors and teachers) who will read Talbert's commentary early in their formation. They will learn from a master teacher how to do biblical exegesis from historical, literary, and theological perspectives."--Daniel J. Harrington, SJ, Catholic Biblical Quarterly

"Volumes in the Paideia commentary series focus on the cultural, literary, and theological settings of the NT writings; treat larger rhetorical units rather than commenting verse-by-verse; and aim to address the needs of students in religion and theology. Charles Talbert . . . succeeds admirably in fulfilling this agenda with regard to Matthew's Gospel. Text boxes, tables for comparison, and pertinent photographs and artistic renderings are sprinkled liberally throughout, focusing attention on relevant theological, historical, cultural, and methodological issues. Talbert's lavish use of Jewish tradition and Greco-Roman philosophical materials draws particular attention to the rich cultural and literary repertoire upon which Matthew draws. . . . Talbert carefully locates each unit, section, and pericope within the structural flow of the Gospel. Larger units of the commentary conclude with extensive comments on 'theological issues,' which display Talbert's command of an array of issues that have vexed Christian interpreters through the centuries as well as his own fresh questions that arise from reading Matthew in light of 1st-century cultural repertoires. This careful, illuminating, and often provocative insight into the ways Matthew's first readers might have heard this story distinguishes this fine commentary in a crowded field."--Stanley P. Saunders, Interpretation

"I find this book to be very helpful. Talbert's attempts to educate twenty-first-century readers about a first-century mindset are well taken. . . . In addition to this, I find Talbert's presentation of dichotomies in Matthew to be fascinating. . . . Another positive feature of Talbert's book are the photographs that illustrate the areas of Israel where Matthew's narrative takes the reader. Talbert is able to capture some of the more important locations pertinent to Matthew's account, and the pictures are extremely helpful for those people who have not visited Israel. I recommend this book because I see it as more in-depth than other elementary commentaries. It gives the reader more insights than other, more elaborate, commentaries regarding the Greco-Roman influence on Matthew's Gospel."--Adam Z. Wright, Journal of Greco-Roman Christianity and Judaism

Praise for the Paideia series
"The Paideia commentary series has established itself as a solid series of concise works that focus on the final form of the biblical text, highlighting narrative flow, rhetorical devices and structure, and commenting particularly on relevant historical background and theological significance."--Craig L. Blomberg, Denver Journal