A Response to the Challenge of Skepticism 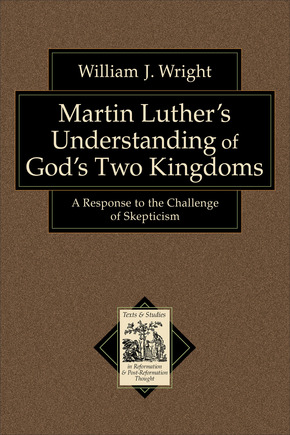 "This book offers a new proposal for the origin of Luther's two kingdoms idea and a strong correction of recent scholarly interpretations of the idea. . . . A welcome addition to the literature and a helpful antidote to lingering misperceptions about this crucial aspect of Luther's thought."--David VanDrunen, Church History The concept of God's two kingdoms was foundational to Luther and subsequent Lutheran theology. Since the middle of the nineteenth century, that concept has been understood primarily in political terms. The most striking example is the Nazi corruption of the concept into a dualism that separated one's activities in the realms of church and state. But is a political reading of the two kingdoms a perversion of Luther's teaching?
Leading Reformation scholar William Wright contends that those who read Luther politically and see in Luther a compartmentalized approach to the Christian life are misreading the Reformer. For Luther, both kingdoms were under the laws and rule of God. Wright reassesses the original breadth of Luther's theology of the two kingdoms and the cultural contexts from which it emerged, showing the influence early Renaissance humanism had on Luther. He argues that Luther's two-kingdom worldview was not a justification for living irresponsibly or carelessly on planet earth. The book includes a variety of Luther's writings that reveal what the Reformer did and did not intend by the concept. These writings show how the two kingdoms converge in all areas of life: family, church, and society.
About the series: The Texts and Studies in Reformation and Post-Reformation Thought series recognizes the need for careful, scholarly treatment of the Reformation and of the era of Protestant orthodoxy, seeking to present the varied and current approaches to Protestantism's rich heritage and to stimulate interest in the roots of the Protestant tradition. The series highlights revised understandings regarding the relationship of the Reformation and orthodoxy to their medieval background and of the thought of both eras to their historical, social, political, and cultural contexts.

"Too often the two kingdoms are invoked and not understood. That is not the case here. Professor Wright has offered us a learned and revolutionary new assessment of Luther's understanding of the two kingdoms. This book will be required reading for anyone seeking to explore Luther on this topic for years to come."--David M. Whitford, professor of the history of Christianity, United Theological Seminary

"By placing Luther's concept against the background of his confrontation with skepticism, Wright produces a new vantage point for assessing Luther's framework for guiding human action in this world. Luther's insights are shown to be helpful in addressing the biblical view of daily life to twenty-first-century problems. This commends Wright's study to audiences with a wide variety of interests in implementing the Christian faith in our culture."--Robert Kolb, professor of systematic theology, Concordia Seminary, Saint Louis

"This volume is a helpful guide to a sometimes difficult topic in Luther's thought, a necessary corrective to previous distortions of it, and at the same time provides a useful digest and survey of a great deal of secondary literature on the Renaissance (both in its Italian and Northern phases), as well as a synthesis of what Luther had to say about the two kingdoms."--N. Scott Amos, Renaissance Quarterly

"This book offers a new proposal for the origin of Luther's two kingdoms idea and a strong correction of recent scholarly interpretations of the idea. . . . Wright plows new and helpful ground in exploring the Renaissance sources and in finding pervasive evidence of the two kingdoms idea penetrating every corner of Luther's theology. This is a welcome addition to the literature and a helpful antidote to lingering misperceptions about this crucial aspect of Luther's thought."--David VanDrunen, Church History

"This book offers an important contribution to studies on Martin Luther's doctrine of the two kingdoms. . . . Wright succeeds in showing (for the first time in such detail) just how important the two kingdoms . . . were for Luther's criticism of skeptics. . . . It does provide a new way to view Luther's work."--Timothy Wengert, Journal of Ecclesiastical History

"This book is an extensively researched addition to the enormous literature on Luther's theology and ethics, especially on his two kingdoms teaching."--Robert Benne, Lutheran Quarterly

"Wright argues persuasively that the two kingdoms theme is not only a political doctrine, and those who have insisted on portraying it that way have misrepresented the reformer from Wittenberg. . . . Wright has correctly placed Luther's thinking within the context of Renaissance humanism, noting especially the influence of Lorenzo Valla. . . . Wright's treatment of Valla's role is thoroughly convincing and may be the best feature of this fine book. . . . Interpreters who have thought humanist influence upon Luther was minimal should reconsider their view in light of Wright's findings. . . . [This book] is a major contribution to Reformation studies. Lucidly written and well documented, it displays the author's keen understanding of the reformer from Wittenberg."--James Edward McGoldrick, Fides et Historia

"There is much in Wright's work on this oft-discussed aspect of Luther's theology: most notably the historical eye with which Wright approaches the topic and Wright's demonstrated facility with a wide range of debates outside of the anglophone world. But Wright's contribution extends beyond the careful and learned account that it undeniably is; moral theologians, church leaders, reformation historians, and laypersons alike can all utilize Wright's work with great profit."--Philip A. Lorish, Scottish Bulletin of Evangelical Theology

"Wright's work provides a full and accurate discussion of Luther's two-kingdoms concept. . . . [It] is a thorough discussion of the influences that affected the development and Luther's intended meaning of the two-kingdoms concept. [Wright] provides good background information on trends in ancient skepticism and a clear delineation of the branches of humanist skepticism for readers who may be less familiar with these topics. . . . This work is extensively documented, and its bibliography contains a wealth of sources to guide the researcher."--Rebecca Peterson, Sixteenth Century Journal