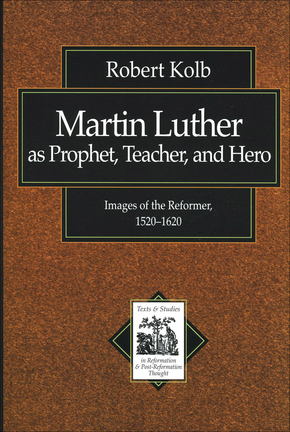 Outlines the continuing role of Luther's legacy, suggesting that succeeding generations of Reformers used Luther in different ways as they faced changing circumstances of the church in their own age.

Despite the vast number of studies concerning the life and teaching of Martin Luther, scholars have not previously considered the ways in which his contemporaries and successors used his influence in the German Reformation. Professor Robert Kolb treats that subject in this well-researched volume on the continuing role of Luther's legacy. The following generations of Reformers, he argues, used Luther in different ways as they sought to deal with the changed circumstances of the church in their own age.

Kolb suggests three categories to describe the ways in which Luther's disciples used his influence and adapted it to the needs of the church in their respective ages: prophet, teacher, and hero.

The second section of the work focuses more particularly on the use and collection of Luther's writings. Kolb recounts the stages of publication as Luther's many treatises, pamphlets, and sermons were gathered for varying purposes. Collected editions were issued, and then topical and systematized selections were gathered for teaching and edification on specific topics. These stages of publication reinforce the author's thesis concerning the changing use of Luther's legacy. Over the course of the century, his writings were no longer cited as uniquely authoritative, rather they were used for edification--the prophet/teacher had become the national hero.

Students of Luther in particular and of the Reformation era in general will find this latest volume in Baker's Texts and Studies in Reformation and Post-Reformation Series (ed. Richard A. Muller) to be of great value. The author's unique approach to Luther's lasting legacy in the German church provides an entirely new perspective that moves scholarly discussion ahead significantly.

"Robert Kolb's study of changing interpretations of Luther's life and work is a valuable contribution to Luther studies. In particular, it demonstrates the impact of Luther on German theological thinking since the 16th century."
--Dr. John Johnson, President, Concordia Seminary, St. Louis, MO

"Professor Kolb has woven a fascinating tale about the effect of Luther on his theological heirs. Here, in an easy-to-read, yet scholarly account, the reader is expertly led through a labyrinth of sixteenth-century Luther reception. Kolb's grasp of the pertinent secondary literature and his command of a vast array of primary sources combine to reveal the variety of ways early Lutherans and others sought to comprehend how the Reformer had changed the religious and social landscape of the early modern German lands. This is a landmark study with which everyone interested in Luther studies will need to grapple."
--Timothy J. Wengert, Professor, The Lutheran Theological Seminary at Philadelphia