Marriage, Scripture, and the Church

Theological Discernment on the Question of Same-Sex Union 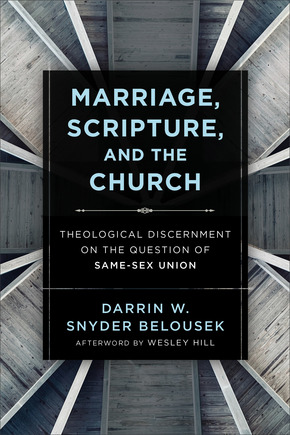 This book takes a distinctive approach to the same-sex-union debate by framing the issue as a matter of marriage. Darrin Snyder Belousek demonstrates that the interpretation of Scripture affects whether the church should revise its doctrine of marriage for the sake of sanctioning same-sex union. Engaging charitably yet critically with opposing viewpoints, he delves deeply into what marriage is, what it is for, and what it means as presented in the biblical narrative and the theological tradition, articulating a biblical-traditional theology of marriage for the contemporary church. Afterword by Wesley Hill.

Living in the Midst: A Personal Introduction
Part 1: Surveying the Situation: Where We Are
1. Stand at the Crossroads: Taking a Bearing
2. Where I Start: Approach and Assumptions
Part 2: Framing the Question: A Matter of Marriage
3. A Great Mystery: Marriage in Scripture and Tradition
4. From the Beginning: Jesus, Marriage, and Genesis
5. Admiring Virginity, Honoring Marriage: Early Church Debate
6. Coupled Together Otherwise: Alterations and Implications
Part 3: Evaluating the Case: Assessing Arguments for Marriage Innovation
7. Hasn't the Church Changed Before? Considering Historical Precedents
8. Might Scripture Provide Support? Considering Biblical Warrants
Part 4: Seeking a Direction: Which Way to Walk
9. Testing the Spirits: Considering Paths to Innovation
10. It Seemed Good to the Holy Spirit: Guidance for Discernment
Afterword by Wesley Hill
Indexes

"I have been waiting for this book! Finally, a book about same-sex sexuality that refuses to rehearse the tired discussion about the prohibition passages and instead reorients our focus where it should have been all along--on the meaning of marriage. What is marriage for? What is sex for? What exactly is marriage? Darrin Snyder Belousek has written a theologically robust, exegetically responsible, and pastorally compassionate tour de force on one of the most important topics facing Christians today. Anyone who wants to engage this topic must read this book."

Preston Sprinkle, president of the Center for Faith, Sexuality & Gender

"I was immediately prejudiced in favor of this book because it starts in such a wise and illuminating place. It starts with the nature of marriage itself as the Scriptures see it and as theologians and the church's teaching have seen it. And it stays with that framework all the way through. This starting point opens up questions about topics other than same-sex marriage, topics such as the integral place of children in marriage and the possibility of divorce. The book is also worryingly up-to-date on where Christian thinking about sex in general is going. If your heart sinks at the thought of yet another discussion of same-sex relationships, make an exception for this one."

"With exegetical precision, theological acumen, and historical depth, Snyder Belousek makes a compelling case that the nature of marriage is really the key issue in same-sex-union debates. He demonstrates that conviction, civility, and compassion can be held together. This is a highly significant work, and I heartily recommend it."

"This extraordinary book offers a comprehensive engagement with the current arguments favoring same-sex marriage from a Christian perspective. Snyder Belousek's tone is balanced and charitable, and his judgments are well reasoned and persuasive. Ultimately, its greatest contribution may consist in recentering the eschatological marriage of God and creation in Christian theology and pastoral practice, thereby teaching all of us, of whatever sexual orientation or state of life, to conceive our vocations in a fresh and striking light. This is the one book on this topic that everyone should read."

"Darrin Snyder Belousek deals with the question of same-sex union in a way that is not only judicious and fair but also generous and kind. His careful and thorough review of both Scripture and church tradition emphasizes the importance of understanding this issue within the context of a robust Christian theology of marriage. By placing the question of same-sex union within the larger context of a theology of marriage, Snyder Belousek reminds us that marriage and sex are not primarily for our own pleasure or purposes but were designed by God to orient our lives toward him and toward his great work of salvation. Ultimately, this book reminds all of us, no matter our sexual orientation, that we do not belong to ourselves; we belong to God."

Christina S. Hitchcock, University of Sioux Falls; author of The Significance of Singleness

"Marriage, Scripture, and the Church is a significant step away from lobbing Bible verses at the opposition like grenades, where, after the dust settles, all that seems left are damaged psyches and broken relationships. Darrin Snyder Belousek offers a rigorous treatment of Christian Scripture, theology, and history in an effort to discern, along with the larger church, what marriage can be and not just what type of sexual activity is allowed or forbidden. All people interested in Christian teaching regarding marriage will find Snyder Belousek's analysis to be thoughtful and thorough, no matter what position they might hold regarding same-sex unions."

"Marriage, Scripture, and the Church is a must-read book. Professor Darrin Snyder Belousek presents an irenic, wholistic, and refreshing reminder of marriage's three facets--procreation, partnership, and prefiguring Christ and the church--and celibacy's prefiguring of the resurrection age, which are not present in same-sex unions."

"Would you like a well-written, carefully researched study of marriage in the Christian tradition, intended as the basis for contemporary discussions about sexual practices and longings? Snyder Belousek's irenic study engages the reader from the start, without making heterosexual monogamy an idol and without denigrating those who struggle with the cogency of his presentation."

"The account of biblical marriage advanced in this volume is remarkable. Snyder Belousek maintains fidelity toward Scripture while highlighting the need to frame our doctrines in ways that address all manner of contemporary challenges. In particular, he is equally honest about challenges that exist within traditionalist faith communities as he is about the challenge of doctrinal innovations that do not remain faithful to Scripture. For example, Snyder Belousek is intentional about framing his account of biblical marriage in ways that are compelling to sexual minorities who adhere to a traditionalist perspective on marriage. For some of these individuals it is not always clear that the historic Christian account of marriage is truly good for all people. Snyder Belousek takes this challenge seriously, and with abundant care he outlines a theology of marriage that is both biblically faithful and pastorally sensitive for all believers, whether gay or straight. I look forward to adding this volume to my short list of recommended resources on the topic of biblical marriage."

"Those of us who write and teach about sexuality are well aware that there is a dearth of books offering a solid theological rationale for marriage. This is particularly true if what we are wanting is a current, well-written, thoroughly researched book, deeply rooted in scriptural teaching and the riches of the Christian tradition. And it is almost too much to hope for that this traditional view will be infused with the gospel, with the compassion, of Jesus Christ. Yet this is precisely what Snyder Belousek offers us in this wonderful book on marriage."

"Like no other book, Marriage, Scripture, and the Church brilliantly frames our current disagreements on sexuality in terms of the doctrine of marriage. It carefully guides the reader through Scripture, church history, doctrine, and current arguments to highlight the different rationales for changing our doctrine and the consequences of doing so. It offers a positive vision and model of how the church might discern God's truth."

"Darrin Snyder Belousek's major achievement has been to reframe the church's debate about same-sex relationships and marriage from a narrow dilemma-ethics context into the broad framework of a biblical, traditional, rational, experiential presentation of a thorough-going theology and ethics of marriage and sexuality. This work is exegetically exact and attentive, not merely on the so-called seven key texts but through a close theological reading of biblical themes in all their expansive significance. Snyder Belousek restores the connection between Genesis, Jesus, and Paul that many have lost sight of. His book is catholic in its respect for the church's two thousand years of grappling with the meaning of marriage; evangelical in its commitment to the life-giving, reconciling gospel (but not in the culture-warrior sense); Anabaptist in its balance between communal discipleship, discipline, and pursuit of reconciliation; and pastoral in seeking to engage sensitively and humbly the experience of a wide range of Christians struggling with these issues. Its modulated tone and transparency regarding assumptions and hermeneutical process are commendable. The lucid writing is laser-like in its logic, and relatively concise despite its vast span. Read discerningly, this book can help bring healing and unity to the church."

Gordon Preece, director of Ethos: EA Centre for Christianity and Society; honorary director of the Religion and Social Policy Network, University of Divinity; and coeditor of Whose Homosexuality? Which Authority? and Sexegesis

"In the wide mix of books and articles on these interrelated topics, Marriage, Scripture, and the Church will make a much-needed contribution. Scholars from every position will need to take Darrin's work into consideration. I highly recommend it."