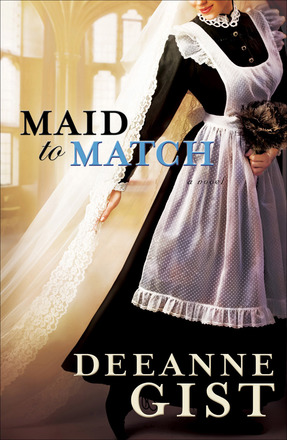 From the day she arrives at the Biltmore, Tillie Reese is dazzled--by the riches of the Vanderbilts and by Mack Danvers, a mountain man turned footman. When Tillie is enlisted to help tame Mack's rugged behavior by tutoring him in the ways of refined society, the resulting sparks threaten Tillie's efforts to be chosen as Edith Vanderbilt's lady's maid. But the stakes rise even higher when Mack and Tillie become entangled in a cover-up at the town orphanage. They could both lose their jobs...and their hearts.

"Tillie Reese, a bright young woman hindered by the extreme poverty in the mountains of New York, gets the job of her dreams--a position as a housemaid in George Vanderbilt's Biltmore Estate. Surrounded by beauty and opulence, Tillie doesn't mind the physical demands of being a servant. Meanwhile, Mack Danver will do anything to save money so he can get his sister out of the school for orphans. His twin brother, Earl, is a footman for the Vanderbilts, and when Mrs. Vanderbilt sees Mack, she decides to make the handsome brothers a 'matched set.' Although well read, Mack is a mountain man at heart and he hates being at the beck and call of the privileged upper class. However, the need to save his sister trumps his distaste. Then it's love at first sight for Mack and Tillie, but rules against the help dating each other make Tillie fight her attraction with all the strength she can muster. Gist's snapshot of the lives of late-nineteenth-century servants is rich in detail, and readers will root for Gist's characters as they face on difficult situation after another with courage and faith. Another crowd-pleaser from this popular author."
--Shelley Mosley, Booklist, June 1, 2010 (STARRED REVIEW)

"Tillie Reese is the head parlor maid in the Vanderbilt estate who's just found out she's one of the two in the running to be Mrs. Vanderbilt's lady's maid, a dream position for Tillie, one her mother's been training her for practically since birth. Mack Danvers is a mountain man who abhors servitude and only agrees to a job at the Vanderbilt estate so he can raise the money to reunite his family. House servants, including both Tillie and Mack, are nto to marry. They're expected to devote themselves wholly to their employers--which creates a problem when Tillie and Mack fall in love. Mack wants to quite the mansion, marry Tillie, and run away to the mountains together. Tillie wants only to be Mrs. Vanderbilt's lady's maid. With prayer and God's gentle guiding, they both discover His plan for them.

"Maid to Match is a motivating tale of trust in the Lord for His guidance in our lives."
--Kelsey Shade, CBA Retailers + Resources, June 2010

"An old-fashioned historical romance novel set at Biltmore, the Vanderbilt estate outside Asheville, N.C., Maid to Match offers a little love, a little bit of history, and just enough evil-doing to make the plot go. When Biltmore's new mistress needs a lady's maid, Tillie Reese is one of the two candidates. If she gets the job, it would be a crowning achievement, fulfilling both her own and her mother's dreams. Her attraction to Mack, the new useful man, threatens the dream. Mack wants both to woo her and to rescue his sister from an orphanage under the care of a wicked man with a shiny exterior. The book offers an admiring look at Biltmore and its technological bells and whistles."
--Susan Olasky, World, August 14, 2010