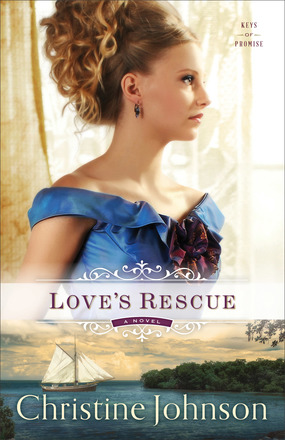 Can a girl enamored with the adventurous seas ever be content with the tame life of a Southern belle?

When her mother dies, Elizabeth Benjamin heads home to Key West, determined to transform herself into the perfect Southern belle her parents always wished her to be. But nothing goes according to plan. Her brother resents her, the servants do not obey her, and Rourke O'Malley, the dashing man she vowed to forget, refuses to relinquish his hold on her heart. Worst of all, it becomes painfully obvious that her father is not the man he appears to be.

As family secrets come to light, Elizabeth is faced with a difficult choice: to perform her duty and abandon her dreams, or to leave her life of privilege behind to chase the man her father sees as little better than a pirate.

From the first emotional page, author Christine Johnson throws you into a world of impossible choices, hidden desires, and heart-melting romance in the steamy South.


Christine Johnson is the author of several books for Steeple Hill and Love Inspired and has been twice named a finalist for Romance Writers of America's Golden Heart award. When not writing, she loves to hike and explore God's majestic creation. She and her husband, a Great Lakes ship pilot, split their time between northern Michigan and the Florida Keys. Learn more at www.christineelizabethjohnson.com.

"Love's Rescue is a fast moving story of forbidden love and shipwreck rescues. Elizabeth Benjamin's independence is refreshing, as she is a headstrong woman who is not afraid to pursue what she desires. This action-packed tale is one to keep readers engaged and rooting for her, from the first page to the last."

"Johnson initiates another swoon-worthy historical series with this emotionally charged romance in which passions run high and things are not always what they seem. Perfect for fans of Melody Carlson and Rachel Hauck."

"The first in Johnson's inspirational romance Keys of Promise series sails off to a strong start with a sweet love story that skillfully incorporates fascinating facts about the nineteenth-century salvage and wrecking trade into a quietly moving plot about the importance of family, faith, and forgiveness."

"Johnson has penned a tale worthy of anyone who has ever dreamed of high seas adventure with this first book in her Keys of the Promise series. Filled with romance, adventure, and drama, Love's Rescue takes readers to the far South, where mannerisms and rules often stifled dreams and desires."