Love on the Line 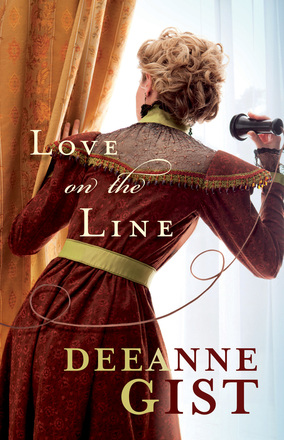 In 1904 Texas Ranger Luke Palmer arrives in Brenham, Texas, with one goal--to capture the gang of outlaws led by Frank Comer. Undercover as a telephone repairman, he uses his days on the range to search, not realizing there's another pair of eyes watching him.

Georgie Gail, switchboard operator and birder, heads out on a birding expedition, but instead of sighting a painted bunting, her opera glasses capture her telephone man, armed and far away from telephone lines. Palmer is forced to take this alluring troublemaker into his confidence and unwittingly puts her in harm's way. The closer he comes to the gang, the further she works her way into his heart--and into trouble. Soon it's more than just love that's on the line.

"Switchboard operator Gerogie Gail sees more than wildlife when she goes out bird-watching. She sees Luke Palmer, the new telephone salesman/repairman, and not only is he working where he shouldn't be, he's also armed and looks very dangerous. Luke is actually Lucious Landrum, a Texas Ranger obsessed with capturing gentleman bandit Frank Comer. However, Frank's Robin Hood style has made the community love--and conceal--him. While Luke goes after Frank, wildlife enthusiast Georgie goes after the people in town who have massacred countless birds to use the feathers in their hats and clothing. Ever-popular Gist (Maid to Match, 2010) has written another delightful tale rich in historical detail. Readers will fall head over heels for the jaded Texas Ranger and the spunky heroine he comes to love."
--Shelley Mosley, Booklist, November 15, 2011

"The line between train robber and Texas Ranger can be a fine one when the robber has a Robin Hood complex and the ranger only wants justice. Lucious Landrum is a Texas Ranger on the hunt for the notorious Frank Comer gang. Georgie is a telephone operator in Brenham, TX, whose train is robbed by Frank and saved by Lucious. Frank doesn't take her money, winning her allegiance, and he also gives money to a woman who just lost her husband. When Lucious rides in guns blazing, Frank hightails it, and none of the passengers will give him up. Lucious is forced to return to home base empty-handed, where he receives an undercover assignment as a telephone handyman in Brenham.

"The characters are imaginative and likeable, while the plot keeps the pages turning. Georgie and Lucious' faith keeps them rooted in what's right and praying to continue on that path."
--Kelsey Shade, CBA Retailers + Resources, October 2011

"Loaded with intrigue, historical context, and birds, this is a well-written story of telephone switchboard operator Georgie Gail and Texas Ranger Lucious Landrum set in 1903. The Ranger goes undercover as a telephone salesman to catch a criminal in Brenham, Texas, and he soon finds himself in love with the bird-loving Georgie. If he blows his cover with Georgie, he could risk his law career and lose the trail of the notorious Comer Gang. Georgie is ferociously protective of birds, and a large part of this story is Georgie's stance against the use of bird parts as decorative accessories in clothing, and in the spirit of Nellie Bly, she educated the townsfolk on her favorite pastime of bird watching. Meanwhile, it is the very townsfolk who are members of the Comer Gang that the Ranger is tracking, and Georgie finds herself immersed in the Ranger's plans to trap the men. If the two survive the Comer Gang, can they allow themselves to love each other when the stubborn and strong-willed Georgie learns who her telephone salesman really is? A fast paced, humourous, and well researched story with many intriguing characters that offers a little bit of everything, Love on the Line is the perfect historical romance to curl up with on a long weekend."
--Marie Burton, Historical Novels Review, Issue 59, February 2012