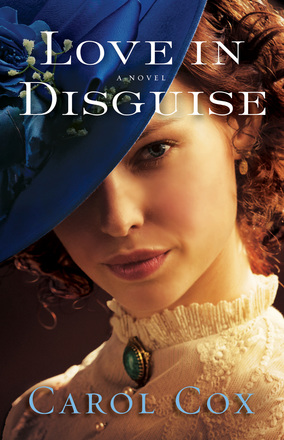 Can she solve the crime before they uncover her true identity?

Jobless and down to her last dime, Ellie Moore hears about a position with the Pinkerton Detective Agency and believes it's the perfect chance to put her acting skills and costumes to use. Reluctantly, the agency agrees to give her one assignment, one chance to prove herself. Disguised as Lavinia Stewart, a middle-aged widow, Ellie travels to Arizona to begin her investigation. When the need arises, she also transforms into the dazzling Jessie Monroe, whose vivacious personality encourages people to talk.

Mine owner Steven Pierce is going to lose his business if he can't figure out who's stealing his silver shipments. In his wildest dreams, he never expected to receive help from a gray-haired widow...or to fall in love with her beautiful niece.

Then the thieves come after Lavinia and Jessie. Ellie isn’t safe no matter which character she plays! Should she give up and reveal her true identity? What will Steven do when he realizes the woman he’s falling in love with doesn’t really exist?

Set in 1880s Arizona, Love in Disguise blends romance, humor, and mystery for a can't-put-down read.

Carol Cox has once again crafted a delightful story with elements of adventure, romance, and humor. In Chicago, 1881, Ellie Moore is down on her luck after losing her job as a personal wardrobe assistant to a local actress. But a chance encounter with the Pinkerton Detective Agency gives Ellie a unique chance to wield her costuming skills. She travels to Pickford, Arizona, in disguise to meet up with another agent on a mission to investigate a silver mining theft. But when things go awry, Ellie winds up having to play two parts--an elderly widow and her beautiful niece. This is no easy task, especially when handsome mine owner Steven Pierce starts wooing the niece.

With an exceptional plot, it was easy to get completely swept up in the adventure as Ellie's crazy scheme and silly antics got more and more complicated. Heartwarming, witty and engaging, this story captured me from the first pages and kept me riveted until the end.

"Cox does a wonderful job of combining historical details, romance, and suspense. Though Cox's latest has moments of humor, it will still appeal to fans of Dee Henderson for the suspense aspect."

"From start to finish, this book had me hooked and I hated having to put it down for any reason. Not only does Love in Disguise contain the perfect blend of character development, mystery and romance, it's also entirely original and unlike anything I've come across in this genre. And although I appreciated the originality of Love in Disguise, I can't help but hope that Carol gets the chance to write another novel about a female detective. If she does, you can be certain that I'll be one of the first to get my hands on it."

"Cox has fleshed out a fascinating cast of characters that move readers through a novel that dispenses romance and wit in the intriguing context of a Wild West mystery. A most delightful and engaging read."