Brain Disease, the Priest's Wife, and the God Who Gives and Takes Away 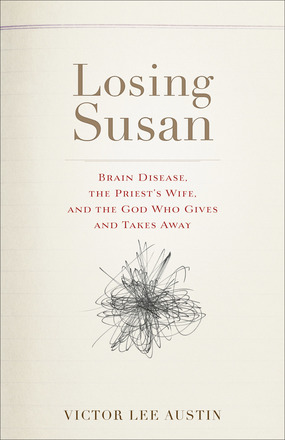 The Story of Brain Disease and the Priest's Wife

This is the story of Susan--a wife, a mother, a Christian believer, a lover of children, a writer of stories, and a woman of extraordinary intellect. Susan was diagnosed with a brain tumor in her late thirties. Although it was successfully treated, the process led to her slow and unending decline throughout the remaining nineteen years of her life.

In this personal story of love and loss, seasoned pastor-theologian Victor Lee Austin shares how caring for his wife during her long, painful struggle with brain cancer and its aftereffects brought him face-to-face with his God and with his faith in unsettling ways. God gave Victor what his heart most desired--marriage to Susan--then God took away what he had given. Yet God never withdrew his presence. Weaving together autobiographical details and profound theological insights, this powerful narrative of suffering and love is told with bracing honesty. It shows that while we cannot tidily make sense of God's role in suffering, we are called to turn to him in the face of pain and death.

"In this painfully truthful book, Victor Lee Austin draws on the theological wisdom shaped by suffering and death to tell us the story of Susan's, his wife's, determination to live and love though suffering from a terminal disease of the brain. As her caregiver, he refuses to hide from himself or us how hard caring for her had been. When finished with the book, however, the reader cannot help but think: what a wonderful love story. Thank God."

"An amazing book. Victor Austin has written a late-modern memoir, with the biblical God as a participant!"

"Victor Lee Austin breaks your heart without sentimentality, stretches your faith without clumsiness, brings you face-to-face with God without fear. By the end, you will know what it means to be precious, honored, and loved--by another and by God."

"This is a moving work, carefully crafted and thoughtfully honest. With lots of love and plenty of pain throughout, these pages brought to mind others who have written similarly, such as C. S. Lewis; however, Victor Austin's account of his and his family's experience in connection with his wife Susan's illness and death remains unique. At one point he shares what Susan would say about the children they would care for as foster parents: 'that deep in their souls they would have a memory of being held, touched, cradled, cleaned, fed, and in general being loved, . . . and that such a deep memory would not be lost, and had the capacity of changing a person's life for good.' This could be said too about this very book. I wish I had personally known Susan, and I am grateful to know Austin--and for his gift in writing."

"Losing Susan is a theo-memoir of intricate beauty. In eloquent prose, Victor Austin testifies to the way in which God surprisingly gave him the desire of his heart through his wife, Susan, and then just as surprisingly took her away. Austin does not shy away from the rough edges and unanswered questions, but instead he brings them before God, narrating a love story not only about Victor and Susan but about God and his people in a world charged with both splendor and decay."

"Father Austin has written a beautiful story of love, loss, and faith, a story that at once moves the mind to reflection, the heart to sympathy, and the will to trust. It is deep but accessible and handles pain and suffering, common to us all, with uncommon intelligence, sensitivity, and humor. This book will help those who have suffered similarly and will inspire and prepare those who have not, yet. It is above all a story of true love, the love between Victor and his dear late wife, their love for God, and God's love for them."

"In this theologically grounded memoir, Episcopal priest and scholar Austin . . . shares the heartbreaking story of his wife's brain cancer and its horrible aftermath. Raw and honest, Austin forces the reader to confront what caring for a terminally ill loved one means--the pain, the exhaustion, the guilt, the joy. . . . Throughout his wife's illness, Austin also wrestles with God's role in suffering and death. . . . This book will warm readers' hearts and bring them to tears. It is a story of what it really means to promise 'for better or for worse' and a must for anyone who has labored along with a loved one through their suffering."

"Victor Lee Austin was living a Song of Songs life. Then he learned what it's like to become Job. . . . Readers will admire Victor's fidelity to his wife and longsuffering, but his years of caring for Susan were marked by second-guessing, uncertainty, and doubts. . . . Though a memoir, the book is also a searching exposition of the Bible's Wisdom Literature. . . . Any theology that can't accommodate the thieving powers of death and disease explodes on the cross of the One who bore the brunt of unspeakable disaster. But as the empty tomb makes clear, even that is not enough to ungift divine love."

"Austin's account of [Susan's] slow decline presents the difficulty caregivers face in having to deal constantly with the crisis of the moment rather than 'the longer, wider perspective' or even the gift of the present moment. He talks about the painful effort to preserve and acknowledge the equal personhood of the one for whom you are caring--and the difficulty that this world of evil presents to religious believers. . . . In the wake of Susan's death, Victor discovered that his Christian faith did hold him up. He realized he had neither been alone nor been tested beyond his capacities by the burdens of a sick, dying wife. He realized that though he had cared for Susan for so long, now he could see her as equal, not 'needing him' as she had, but being cared for by God just as Victor is. The real deal, as he discovered, was how the 'strange character' we call God changes our lives, through love and suffering bound inextricably together."

"Losing Susan is an inspired story that defines God's love for mankind and mankind's love for one another. Two small lives so carefully crafted by the Master mirror the precious, delicate, intimate relationship God has with each one of us. . . . Love defined, authentic, sweet, tragic, honest, and unforgettable. This must-read book . . . will make a lasting difference in the lives of readers."

"[This book] is both a memoir processing [Austin's] grief and a beautiful piece of bottom-up non-technical theology. Its melding of theological thinking with his experience of loss makes Losing Susan generally helpful but especially so to sufferers, caregivers, and pastoral counselors. I can see it in a college or seminary classroom, and for me it was good for prayer at a silent retreat. . . . Austin's main objective is to work through losing Susan. . . . This he does unsentimentally and with a light touch that still makes the reader feel his pain and his regret for becoming at times impatient, frustrated, and even angry with her--all understandable as he had to carry on his duties as priest, teacher, and theologian while taking over her executive function and tending to her most basic bodily needs. . . . I cannot begin to give the reader a sense of how exhilarating Austin's last 50 pages are. . . . Austin has focused our attention properly: not on the eloquent wisdom of philosophers and theologians but on the action of God to share and overcome our suffering."

"On finishing Victor Lee Austin's book Losing Susan, I feel as though I have been on a journey with someone who, while at first a stranger, by journey's end has become something of a soul companion. . . . This beautiful book is as accessible as it is theologically sophisticated. . . . Austin makes no attempt to sanitize suffering. Instead, he describes in detail the daily burdens, frustrations, and indignities for Susan, and for him as her carer, each stage of her decline adding to a heart-breaking litany of loss. It is extraordinary that he can do so with such transparency and yet without trace of either bitterness or self-pity. . . . Austin bears quiet testimony to a faith that, instead of being diminished by loss, is strangely and wonderfully enlarged. I ended my journey with this book reflecting on love and the power that it has to permeate and transform our suffering."

"Austin's meditation on grief . . . isn't so much a working out of theological tension as it is a deeply personal narrative, one that ultimately poses more questions than it answers. Still, in grappling with perplexity, Austin, an Episcopal priest, has penned not only a moving tribute to his late wife, but also a compelling testament to the dignity that inheres in all human beings at all stages of life. . . . For nearly two decades, [Susan] suffered from a brain disease that radically altered the life she had expected to life. Yet it is this unexpected life that is her legacy, a testament to a unique individual who had much to offer this world and a community that needed to be reminded of that truth. We owe our gratitude to Victor Austin for his deeply personal and honest wrestling with a perplexing mystery because in Losing Susan much as been found."