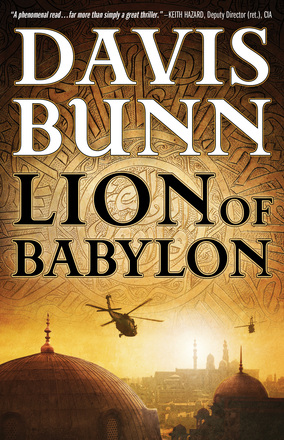 Marc Royce has been a State Department agent involved in covert operations--that is, until personal issues lead to his dismissal.

When Alex Baird goes missing in war-torn Baghdad, State comes calling again. Alex is a CIA agent--and a close friend of Royce. Three others have also dropped out of sight--a nurse, an aid worker, a wealthy young Iraqi. Are these cases linked? Rumors circulate about a kidnapping conspiracy, yet both American and local officials refuse to pursue it.

Blocked at every turn, Royce eventually unearths a trail of secret encounters between sworn enemies. What he discovers could transform the course of rivalry and reconciliation throughout the Mideast. As the human and political drama escalates, can one man summon the courage to make a difference?

Description is so vivid you can smell the food and choke on the desert sand...Bunn's fans will leap for this precise and intricate tales of cross-cultural friendship and loyalty in the heart of the Red Zone.

This exciting, action-packed thriller features a strong sense of place in its depictions of the people and politics of the Middle East. It is sure to please [Bunn] fans and win him new ones

A fast-paced, gripping thriller, Lion of Babylon is rich not only with adventure but also with visual details and dramatic, snapshot insights into the Middle East, its traditions, history, and people.

A phenomenal read. Lion of Babylon is far more than simply a great thriller. This book delves into a series of crucial issues, and does so with a sensitivity that left me literally stunned. Bunn tells a story that grips the reader and refuses to let go...The descriptions are beautifully crafted, the characters vibrantly drawn.

It is a terrific book, deeply moving with new insights into important connections between the world's faiths...I have long admired and appreciated Davis's work and I will say I think this is his finest.