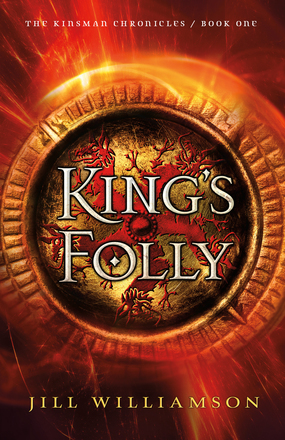 Their Battle for the Throne Has Just Begun.
But Will It Matter if the World They Rule Collapses Into the Sea?

The gods are angry.

Volcanic eruptions, sinkholes, ground shakers--everything points to their unhappiness. At least that is what the king of Armania believes. His son Prince Wilek thinks his father's superstitions are nonsense, though he remains the ever dutiful First Arm of Armania.

When a messenger arrives and claims that the town of Farway has been swallowed by the earth, the king sends Wilek to investigate. But what Wilek discovers is more cataclysmic than one lost city. Even as the ground shifts beneath his feet, Wilek sets out on a desperate journey to save his people and his world. But can he do it before the entire land crumbles?

This volume includes the first three parts of The Kinsman Chronicles originally released as ebooks.
Part 1--Darkness Reigns
Part 2--The Heir War
Part 3--The End of All Things

"This series starter is an intense drama of biblical proportions...Wilek, Mielle, and Trevn in particular are intriguing, and the ending leaves readers wondering what adventures await this group of young people searching for truth."

"This first book in the Kinsman Chronicles contains all the archetypal elements fantasy readers long for: a dangerous quest, the search for restoration, and a hero's trial and tribulations through vast darkness and adventure. Fans will be swept away by Williamson's fantasy world...King's Folly is an expertly crafted epic tale in the Tolkien tradition that will leave customers impatiently waiting the next installment."

"Williamson crafts a complex and vividly portrayed epic fantasy reminiscent of George R.R. Martin's 'A Song of Ice and Fire' series but less edgy and with a Christian worldview. Loosely following the events in the Old Testament, the author depicts a society in which paganism and superstition are deeply ingrained prior to the coming of the Savior."